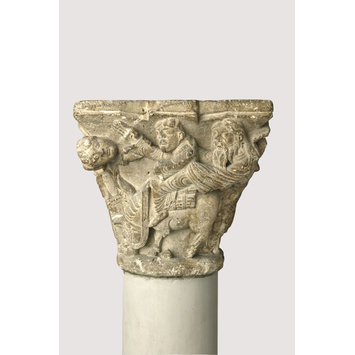 Capital . The Sacrafice of Isaac

Isaac is shown being led to the altar on an ass, just as an angel instructs his father Abraham to sacrifice a ram instead. Abraham’s unquestioning obedience to God was understood to prefigure Christ’s sacrifice at the Crucifixion.

Limestone capital depicting the sacrifice of Isaac. On one side, Isaac on an ass, with the angel flying in front of him and leading him by the hand. Abraham follows behind. The story continues on the next two sides, with Isaac on the altar, his hair held by Abraham, whose right hand is restrained by an angel. Below the angel is the ram. The condition of the capital is fair.

The capital is most closely comparable with a capital in the Musee des Beaux-Arts at Soissons (from the cloister of the abbey of saint-medard at Soissons) and the baptismal font from the abbey of Saint-Larme at Selincourt (Somme), now in the Musee de Picardie at Amiens (Chefs-d'oeuvre romans de musee de province, Musee du Louvre, Paris 22 November 1957 - 24 March 1958 catalogue nos. 85 and 95) .
The Soissons capital, of around 1150, also shows the sacrifice of Isaac (with a similar composition to the present capital) and the carving of certain details such as the ram and the facial types suggests that both capitals were produced in the same region.

The story of Abraham, the first of the great Hebrew patriarchs of the Old Testament is contained in the Book of Genesis, 11:26 to 25:18.Called by God. He is portrayed with white hair and a flowing beard and his attribute is the knife with which he intended to sacrifice Isaac.
To test Abraham's faith God commanded him to make a burnt offering of his son, Isaac. They went to the place of sacrifice Abraham on an ass and Isaac carrying wood for the altar fire. Abraham bound Isaac, laid him on the altar and drew his knife, at which point an angel appeared and stayed Abraham's hand. God recognises Abraham as a God-fearing man as he had not withheld his son. On looking up, Abraham saw a ram caught in a thorny thicket, which he then sacrificed instead.
This subject occupies a central place in medieval typology - in which it was considered to prefigure the Crucifixion and God's sacrifice of Christ. Isaac carries the wood as Christ carried the cross, the ram came to represent Christ, the thicket the crown of thorns.
According to Muslim tradition, Abraham's sacrifice took place on the site of the Mosque of Omar (The Dome of the Rock) Jerusalem.

Capital, limestone, depicting the sacrifice of Isaac, France, about 1150. 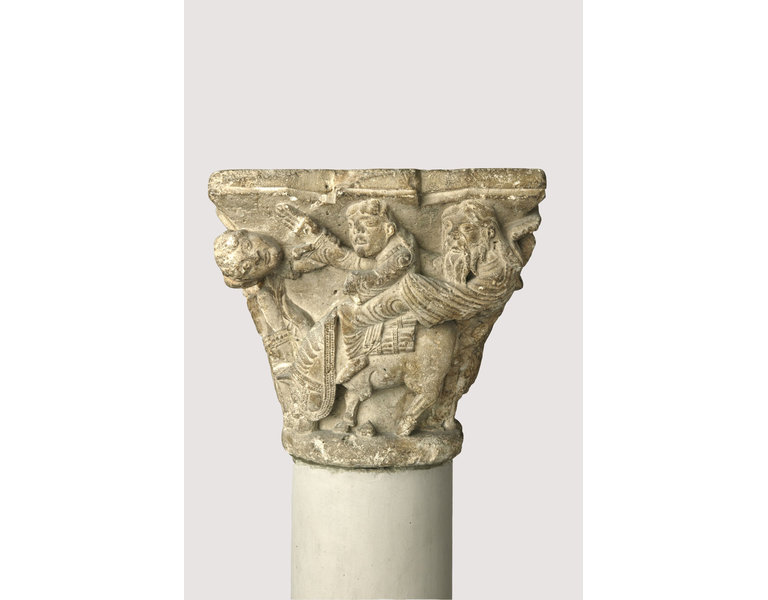