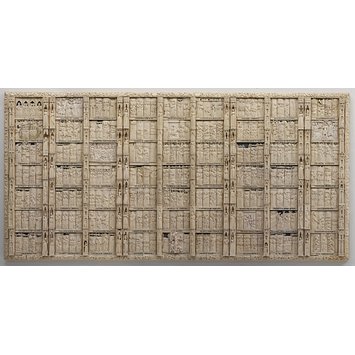 This altarpiece in bone and ivory was probably made in Venice, in about 1390-1400. This altarpiece depicts sixtythree scenes from the New Testament and the Apocryphal Gospels. The scenes are separated by rows of small figures under canopies and surrounded by a border of foliage. While most of the plaques are of bonme, some are of ivory and self-evidently do not belong to the original sequence. The panels have been subject to at least two intrusive campaigns of restauration and rearrangement. One was by Carl Schmidt in 1836, who was a Prussian furniture maker working in Vienna. On acquisition, Margaret Longhurst rearranged it to the current scheme, which is chronological.

Carved bone and ivory plaques on wood depicting scenes from the New Testament. The scenes are separated by rows of small figures under canopies and surrounded by a border of foliage.
Two groups of plaques appear in the border; the first depicts amorini among foliage, some of them holding blank shields, while the second is composed of large, fleshy stems bearing fruit and flowers, from which emerge figures playing musical instruments. The 63 narrative scenes are arranged in seven registers with nine panels to each tier, most of the scenes being composed of four carved plaques. Below the scenes are moulded and recessed strips, on which have been painted captions in black pigment.

Carved bone and ivory, with traces of pigment and gilding on a modern wood support

The panels were in Vienna in 1836, when they were the subject of restauration by the cabinet-maker and sculptor Karl Schmidt. By 1923, when the panels were shown at the Burlington Fine Arts Club, they were owned by Lavinia Mary Fitzalan-Howard, Duchess of Norfolk; purchased from her in 1928, for £600.

Panels, carved bone and ivory, from an altarpiece, depicting scenes from the New Testament, School of the Embriachi, North Italy (Venice), ca. 1390-1400, with later additions 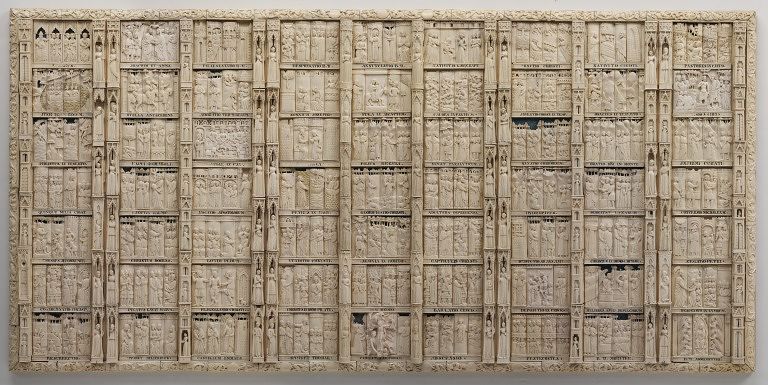