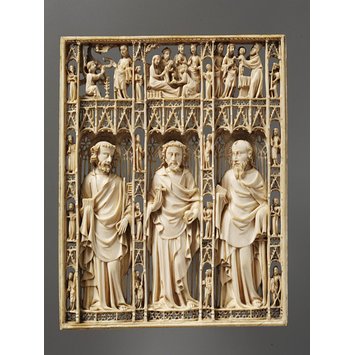 The Annunciation, the Adoration of the Magi and the Presentation in the Temple and Christ, St Peter and St Paul

This ivory panel, made in Northern France or probably Paris, probably in the late fourteenth century represents Christ with St. Peter and St. Paul and above it are the Annunciation, the Adoration of the Magi, and the Presentation in the Temple. During the 14th century specialist ivory craftsmen carved both secular and religious objects in great numbers. Although Paris was the main centre of production, other workshops emerged in Italy and Germany. Some of the craftsmen may have been trained in Paris as their work often combines French and local styles.
The work has remarkable detail, especially the ribbed vaults of the canopies. The juxtaposing of large standing figures with an elaborate surrounding architecture containing small figures in niches is also found on fourteenth century seal matrices. The marriage of technical accomplishment and art-historical accuracy would seem to be beyond ab early nineteenth century forger.

Carved and pierced ivory panel depicting Christ between St. Peter and St. Paul, depicted above are the Annunciation, the Adoration of the Magi and the Presentation. The three principal figures stand in traceried niches under triple arched canopies with ribbed vaults. The niches are divided by uprights with eight small figures of saints in the first and third tiers and eight angels playing musical instruments in the second and fourth. Christ holds an orb in his left hand and - unusually - a short cross in his right, rather than blessing. Peter holds a large key in his left hand and a book in his covered right hand; and Paul supports his sword with his left hand (covered by his mantle) and holds a book in his right. The figures stand on pedestals with finely pierced quatrefoils.

France (north or probably Paris, made)

Panel, carved and pierced ivory relief, depicting Christ with St. Peter and St. Paul, the Annunciation, the Adoration of the Magi and the Presentation, Northern France (or probably Paris), probably late fourteenth century 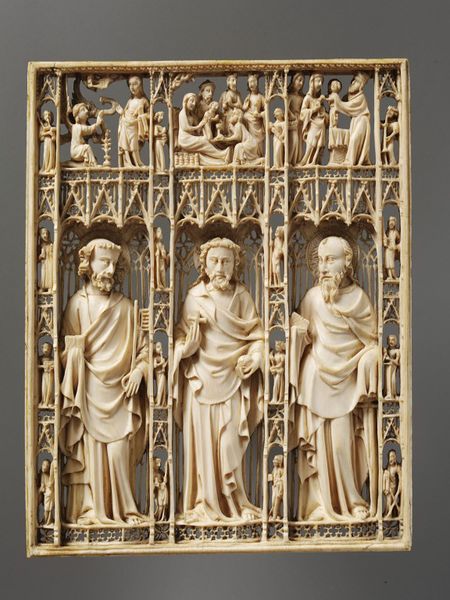