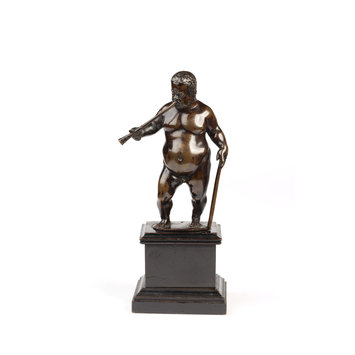 This bronze portrays Braccio di Bartolo, known as "Il Morgante" (about 1535-after 1594), who was the court dwarf of Cosimo I de' Medici (1519-74), Grand-Duke of Tuscany. He was ironically named after the mythological giant, Morgante Maggiore, of Luigi' Pulci's poem published in 1482 and was essentially a court jester. Dwarves featured prominently in the Medici court, as they were a subject of fascination and patronising affection. The statuette shows Morgante blowing a cornetto held in his right hand while he supports himself with a stick in his left. It is one of only two complete surviving examples of this kind (the other is in the Musé Calvet, Avignon) and although it was designed by Giambologna, it is possible that it was executed by an assistant in his workshop.

Bronze statuette depicting Morgante, dwarf of Cosimo I of Tuscany, blowing a cornetto.

The red-brown lacquer is now much rubbed and darkened, and the shaft of the cornetto (perhaps originally cast separately) has been broken above the hand and repaired.

This object was purchased in 1865 from the sale of the Pourtalès Collection in Paris. Many Italian works of art were being taken to France and sold following Napoleon's occupancy of Italy. The bronze depicts the famous court dwarf Morgante (about 1535 - after 1594) of the court of Grand-duke Cosimo I de’ Medici. Morgante was portrayed several times in painting and sculpture, including a large bronze in the Boboli Gardens in Florence, attributed to Valerio Cioli, where he appears naked on the back of a turtle.
This statuette is known in two variants. The first, as in this example, shows the corpulent Morgante blowing a cornetto held in his right hand while he supports himself with a stick in his left side. The second variant shows him personified as Bacchus with a wine cup in his right hand and a bunch of grapes in his left hand.
There are only two known complete examples of the first variant (the other is in the Musée Calvet, Avignon). In other examples of this variant, the cornetto is either wholly missing (as is the case with one owned by the Royal Museum of Copenhagen) or is lacking the bell (like those at the Beit and formerly Martin le Roy Collections). In addition, this model possesses an integrally cast oval base with a central fixing pin, whereas those of the second variant lack the integral base and are generally of a coarser quality.
In addition to Cioli’s version in the Boboli gardens, it is thought that Giambologna’s inspiration for this particular statuette may have come from a double-sided painting of the naked Morgante by Bronzino, which shows him front and back. The painting was in the Medici collection by 1553 and would have still been considered a novelty when Giambologna reached Florence. The model for this statuette was designed by Giambologna, but the handling and surface finish (patination) suggest that it might have been executed by Susini while he was still an assistant in Giambologna's workshop.

Among Giambologna’s many portraits, his various versions of Morgante are easily overlooked. Morgante, (ironically named after a mythological giant Morgante Maggiore of Luigi Pulci’s epic poem, first published in Florence in 1482) was the plump dwarf who was court jester to the Medici and one of the best-known characters in 16th-century Italy. Dwarves featured prominently in the Medici court, as they were the subject of fascination and disgust, endless ridicule, and patronising affection. In Giambologna’s bronze narrative relief of the Coronation of Cosimo I as Grand Duke the diminutive figure of Morgante, appears in animated conversation with a courtier among groups of bystanders.
In the sixteenth century, Braccio di Bartolo ("il Morgante") was the most celebrated dwarf at the Medici Court and one of Cosimo I’s favourite. He was famously said to have fought and wrestled with a monkey to the amusement of Duke Cosimo I. The Grand Duke’s pleasure was presumably rooted in the traditional belief that dwarves were wildly lascivious and subject to unbridled sexual passions. In some of the bronzes depicting Morgante from Giambologna's workshop, he is likened to Bacchus, the Roman god of wine and intoxication, and likewise to the lustful satyr Silenus. 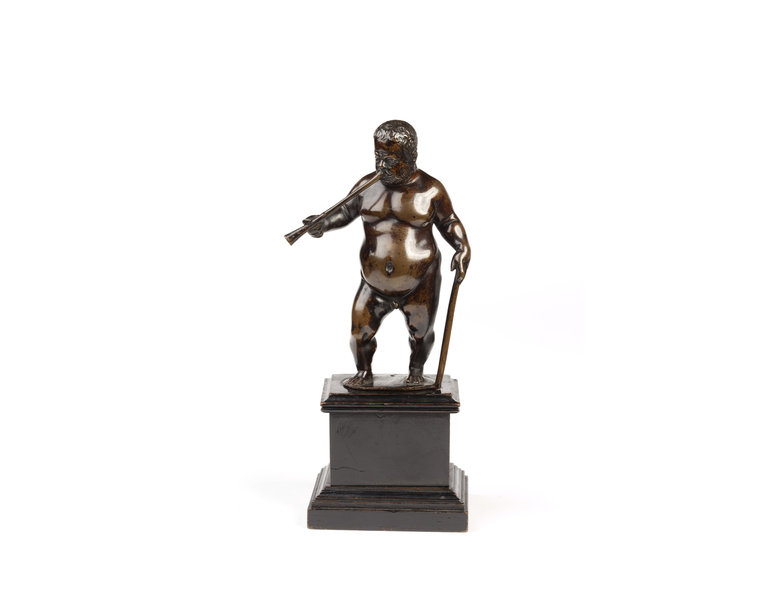