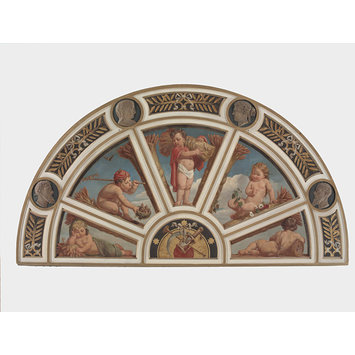 Decorative lunette painting of five children with sheafs of wheat and four profiles of busts.

This decorative painting was commissioned to decorate one of eighteen lunette-shaped recesses in the upper portion of rooms 100 and 101 (at that time the National Competition Gallery). The lunettes were removed just before the Second World War and placed in store. This painting, along with the eight others made for the west wall of room 101, was conserved and reinstalled in its original location in August 2010.

The compositional canvases were interspersed with eight decorative lunette paintings, four for each side of the gallery. Each of these is divided into segments, providing five main compositional areas with a semicircular area at the bottom. All feature infants in allegorical schemes. This lunette is decorated with an allegory of summer, with large sheaves of wheat or corn and a central cartouche design incorporating a sickle.

Alfred Morgan (fl.1862-1904) had a long association with the South Kensington Museum. He was a student at the South Kensington School of Art, and he later executed a portrait of Inigo Jones for the Kensington Valhalla project, which was made in English ceramic mosaic by W. B. Simpson and Sons and placed in position in 1868.

Morgan exhibited at the Royal Academy and elsewhere between 1862 and 1904. His subjects were wide-ranging: still life (dead game, fruit and flowers), genre pictures, portrait, landscape, historical and Scriptural subjects. 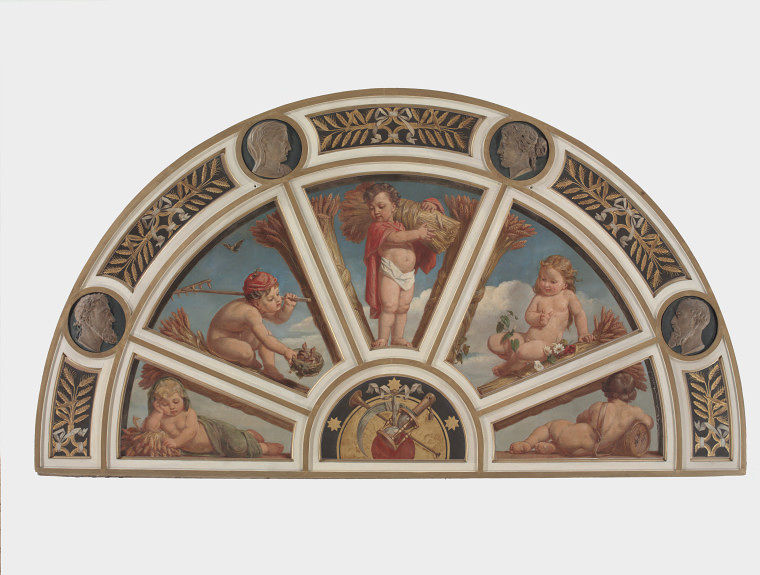