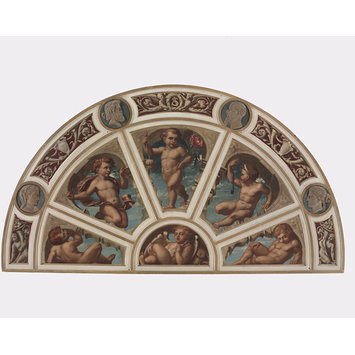 Decorative lunette painting of five children and one cherub. Frame is gold and cream with four profiles of busts.

This decorative painting was commissioned to decorate one of eighteen lunette-shaped recesses in the upper portion of rooms 100 and 101 (at that time the National Competition Gallery). The lunettes were removed just before the Second World War and placed in store. This painting, along with the eight others made for the west wall of room 101, was conserved and reinstalled in its original location in August 2010.

The compositional canvases were interspersed with eight decorative lunette paintings, four for each side of the gallery. Each of these is divided into segments, providing five main compositional areas with a semicircular area at the bottom. All feature infants in allegorical schemes. The poppies, long opium pipe and slumbering infants depicted in this lunette suggest that it is an allegory of the imagination.

Frank W. Moody (1824-86) was a designer and instructor of decorative art at South Kensington, having joined the Department of Science and Art in 1863. He was also instructor of Decorative Works at the South Kensington Museum. He was one of Godfrey Sykes's assistants, helping to carry out the decoration of the Museum and heading a team of student workers. Moody was also responsible for the lunette painting Study of Anatomy(SKM 18).

Frank Moody was assisted by William Wise, a former Art Student employed in Moody's studio in the museum. 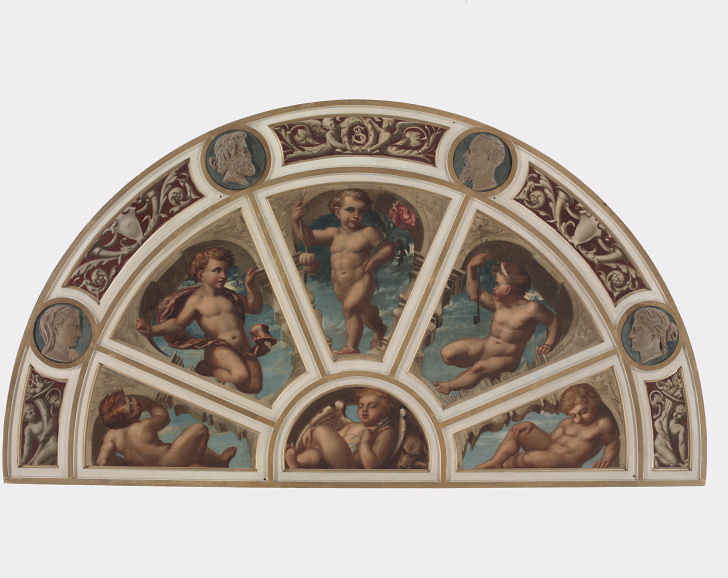