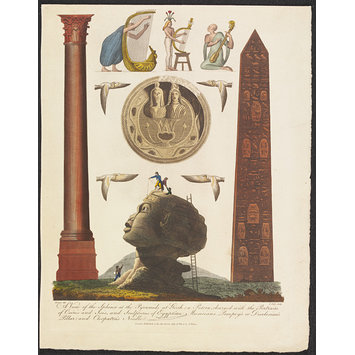 A view of the Sphinx at the Pyramids at Gizeh, a Patera, charged with the portraits of Osiris and Isis, and Sculptures of Egyptian Musicians, Pompey's or Dioclesian's Pillar, and Cleopatra's Needle

This plate is from Description de l‘Egypte, an ambitious work published in stages between 1809 in and1828 in 23 volumes, and featuring more than 837 engravings. The engraving is based on sketches made by the artist and diplomat Dominique Vivant, Baron de Denon (1747-1825) who travelled with Napoleon’s army in Egypt in 1798. While Napoleon campaigned in Lower Egypt, Denon accompanied General Louis Desaix (1768-1800) through Upper Egypt in a campaign against the Mamluk leader Murad Bey.

Denon’s artwork and the resulting publications sparked a renewal of interest in the Egyptian arts and Egyptian motifs featured in French architecture and the decorative arts.

Page showing the head of the Sphinx at Gizeh in the ground, on which European men are climbing. This image is surrounded by representations of other momuments including in the centre a patera with fern, a papyrus flower and grape-vine decorations and depicting the heads of Osiris and Isis, four birds in flight, and across the top images of sculptures of three Egyptian Musicians playing stringed instruments, and lower left and right Diocletian's Monument (Pompey's Pillar) and Cleopatra's Needle.

A view of the Sphinx at the Pyramids at Gizeh; a Patera, charged with the Portraits of Osiris and Isis, and Sculptures of Egyptian Musicians. Pompey's or Dioclesian's Pillar; and Cleopatra's Needle.
Lettered below image

Description taken from Searight Catalogue.
Dominique Vivant Denon, Baron (1747-1825) was a leading French Egyptologist, artist, diplomat, author and antiquary. Courtier at Versailles he held various diplomatic posts. He went to Egypt during the Napoleonic Campaign in 1798-9 and published 'Voyage dans la Basse et la Haute Égypte' in 1802 and his drawings were also published in 'Description de L'Égypte' in 1809-22.
J Nowinsky 'Baron Dominique Vivant Denon (1747-1825): Hedonist and Sholar in a Period of Transition' (Cranbury, New Jersey, 1970. and NGI, 'The East', 1988.

Etching coloured by hand, engraved by I. Pafs after Denon, entitled 'A view of the Sphinx at the Pyramids at Gizeh ... and Cleopatra's Needle'. London, published by J Wilkes, 1804. 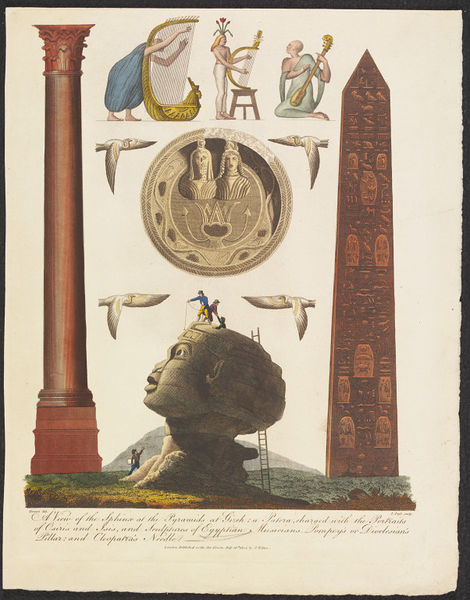