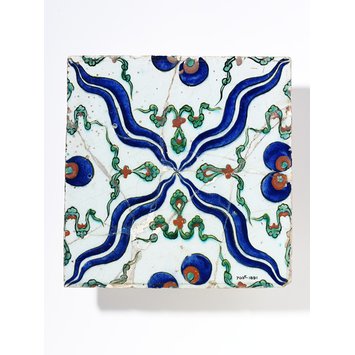 In many ways this chimney piece is typical of the tile work produced in the small town of Iznik in north-west Turkey from about 1550 to 1700. The pottery industry there eventually went into decline, however, and when the Ottoman court renewed its interest in tile production in the reign of Sultan Ahmed III (1703–1730), it had to reinvent the industry, which was relocated to Istanbul. Ottoman grandees were again able to decorate their palaces with tile work ensembles such as this chimney piece, dated 1731 and reportedly rescued from the palace of a high official called Fuad Pasha.

The shape is relatively complex, and many of the tiles had to be moulded to fit. The body fabric is an artificial paste called fritware, composed mostly of ground quartz rather than clay. Fritware was preferred because of its whiteness, which provided the background for decoration painted under the glaze in blue, turquoise, green and red. The designs belong mostly to the repertory of ornament developed by the Ottoman court around 1500–1600: scrollwork set with large composite blossoms; arabesque scrolls; and pairs of wavy lines around a group of three large spots – the ‘tiger-stripe and leopard-spot’ motif – here combined with Chinese-style cloud bands. However, the large-scale pattern of leafy scrollwork in blue on white on either side of the hood and running down the sides is in a Europeanising style that was introduced into Ottoman art around 1700–1730.

Seven tiles with inscriptions in the Arabic script form a frieze around the hood. They give the names of the Seven Sleepers of Ephesus – a group of Christians who were miraculously rescued from religious persecution under the Roman emperor Decius by falling asleep in a cave and waking several centuries later. Their story is mentioned in the Qur’an, and their names were often displayed in Turkish houses because they were thought to ward off misfortune.

Turkey (made)
Istanbul (probably, made)

Names of the Seven Sleepers of Ephesus

Short poem with chronogram
A man emerged to pray and said at once by way of a chronogram: 'Here are Ottoman tiles apparent.' [adds up to 1143]

The names around the hood are those of the Seven Sleepers. Persecuted under the Roman emperor Decius, these Christian men took refuge in a cave. They fell asleep, waking centuries later under Christian rule.

The Seven Sleepers are mentioned in the Qur’an as an example of God’s protection of the righteous. Their names were therefore used to invoke that protection. 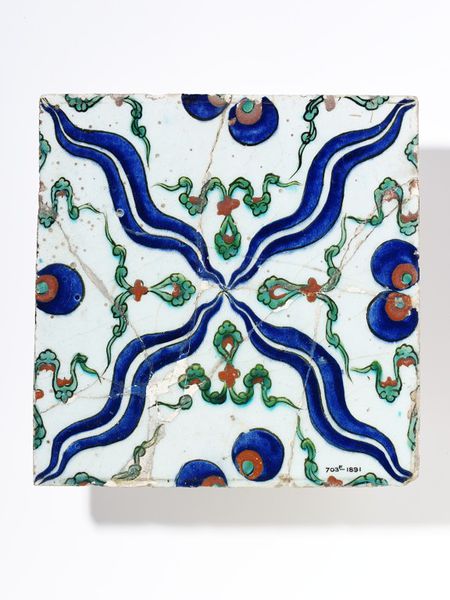