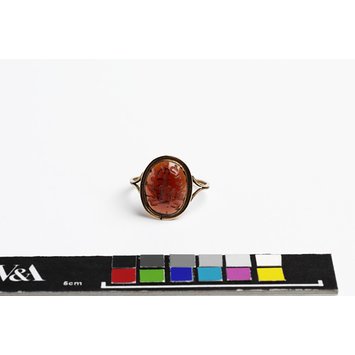 The art of engraving gemstones can be traced back to ancient Greece in the 8th century BC and earlier. Techniques passed down to the Egyptians and then to the Romans. There were major revivals of interest in engraved gems in Europe during the Byantine era, the Middle Ages, the Renaissance, and again in the 18th and 19th centuries. At each stage cameos and intaglios, these skillful carvings on a minute scale, were much prized and collected, sometimes as symbols of power mounted in jewelled settings, sometimes as small objects for private devotion or enjoyment. This intaglio sealstone survives from one of the communities of the Jewish diaspora, where Jews were assimilated into the Sassanian empire, primarily in Babylonia, or modern-day Iraq. The Hebrew inscription translates as 'Hileli, son of Menashah'. The symbols depicted are relevant to the seven-day festival of Sukkot, during which a palm frond and boughs from the myrtle and willow trees are bound together in a specific and prescribed manner, and waved, together with the fruit of the citron tree. This sacred assemblage is known as Lulav and Etrog, or the Four Species, and the ancient mitzvah or commandment for their use during the festival continues to be observed today.

Upright oval intaglio. Depicting a bundle of branches bound together, the Jewish religious devices of The Four Species - Lulav, Hadass, Aravah and Etrog (a date palm frond, myrtle and willow boughs and the fruit of the citron tree), with a Hebrew inscription around them.

Ex Waterton Collection. According to Machell Cox "possibly lot 30, in the catalogue of 1868". Edmund Waterton (1830-87) is referred to as one of a group of 'pioneer collectors' by Diana Scarisbrick, 'C.D.E. Fortnum as a collector of rings and gems', C.D.E. Fortnum and the collecting and study of applied arts and sculpture in Victorian England, Ed: Ben Thomas and Timothy Wilson, 1999. His collection of approximately 760 rings, formed with the aim of illustrating the history of rings of all period and types, was acquired by the Museum in 1871 and 1899. Waterton, in 1868 'of Walton Castle, near Wakefield, in the county of York, but now residing at Ostend in the Kingdom of Belgium', got into financial difficulties, and was later to be declared bankrupt. The collection of rings was held as security against a loan by the jeweller Robert Phillips for two years from March of that year. The loan was to be repaid by Waterton by March 1870, but the deadline was not met. Phillips having first contacted the Museum regarding the possible purchase of the rings in 1869, the purchase was recommended by the Board of the Museum in a minute of 20 April 1871. The majority of the rings are held in Metalwork Section, a small number in Sculpture Section.

Historical significance: For a discussion of this and others of the same type see Jeffrey Spier, Late Antique and Early Christian Gems, Weisbaden, 2007, pp. 167-8. 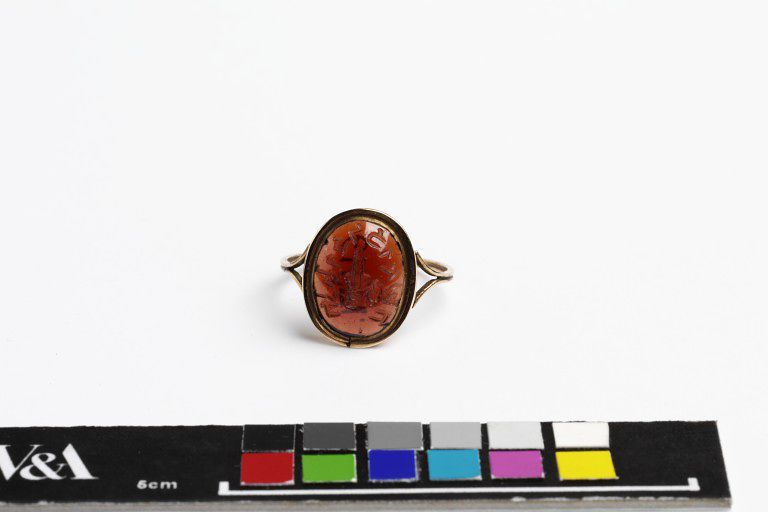