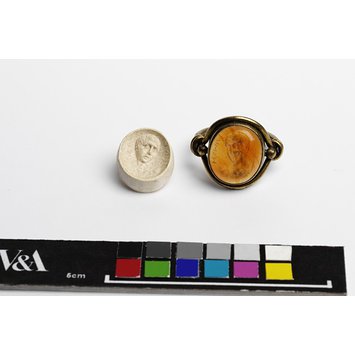 The art of engraving gemstones can be traced back to ancient Greece in the 8th century BC and earlier. Techniques passed down to the Egyptians and then to the Romans. There were major revivals of interest in engraved gems in Europe during the Byantine era, the Middle Ages, the Renaissance, and again in the 18th and 19th centuries. At each stage cameos and intaglios, these skillful carvings on a minute scale, were much prized and collected, sometimes as symbols of power mounted in jewelled settings, sometimes as small objects for private devotion or enjoyment.
This intaglio demonstrates the difficulties sometimes encountered in dating engraved gems. It has not been possible to decide whether it is actually late Roman, as its appearance at first suggests, or whether it was in fact made in the neo-classical style centuries later. In the late 1700s and early 1800s in Europe, taste in the arts echoed the subject matter and style of the Greek and Roman masters. Thousands of gems were made in this style in Italy and brought back by British Grand Tourists, who went there to visit the newly-discovered classical antiquities and archaeological sites.

Vertical oval intaglio. Depicting the bust of a young man, facing three quarters right, his shoulders draped. He is clean-shaven and has close cropped hair. On his left is the top portion of a spear or javelin. On his right, an inscription in Greek letters.

Historical significance: Professor Sir John Boardman, who examined this gem in 2009, is of the opinion that it could either be late Roman, or Neo-Classical. Machell Cox was also uncertain of its age, citing a similar bust, with the same inscription, among the Tassie casts (Tassie 10639), at the time in the collection of Count Bruhl, and described in Raspe-Tassie as 'post-classical'. 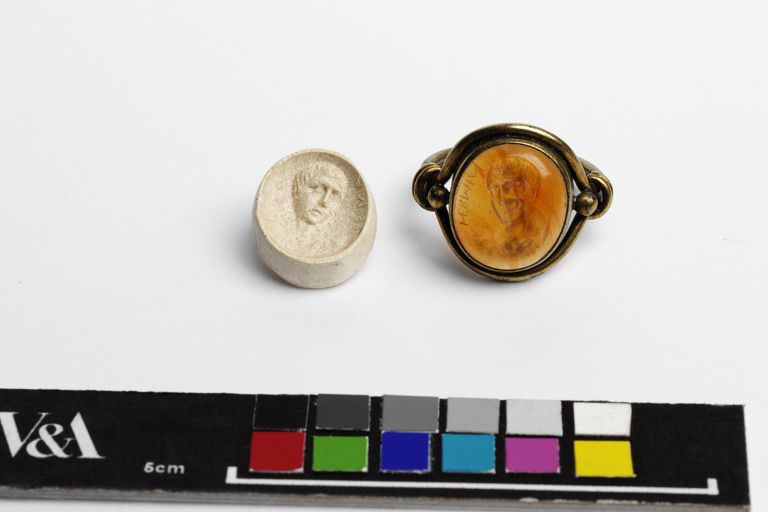