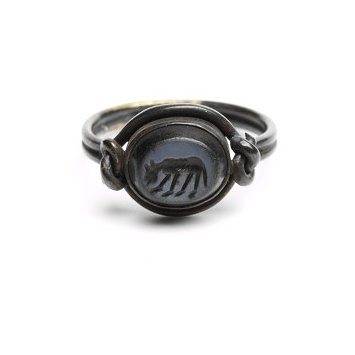 The art of engraving gemstones can be traced back to ancient Greece in the 8th century BC and earlier. Techniques passed down to the Egyptians and then to the Romans. There were major revivals of interest in engraved gems in Europe during the Byantine era, the Middle Ages, the Renaissance, and again in the 18th and 19th centuries. At each stage cameos and intaglios, these skillful carvings on a minute scale, were much prized and collected, sometimes as symbols of power mounted in jewelled settings, sometimes as small objects for private devotion or enjoyment. Engraved gems with this appearance are described as 'nicolo'. A two-layered agate is used, the bottom layer black or very dark, the top white. The top layer is ground away until only a thin film of the white remains, which then appears greyish-blue due to the dark layer showing through it. The gem is then engraved through the whiteish layer into the dark below. They were frequently imitated in glass. This rather crudely-engraved gem, dating to some time during the two centuries before the birth of Christ, may represent a popular image, the Roman wolf. According to legend, a she-wolf suckled the twins Romulus and Remus, descendants of Aeneas and founders of Rome, when they were cast out as infants.

Horizontal oval intaglio. Depicting what may be a wolf, its head lowered, standing in profile facing right. 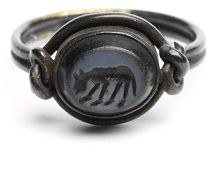