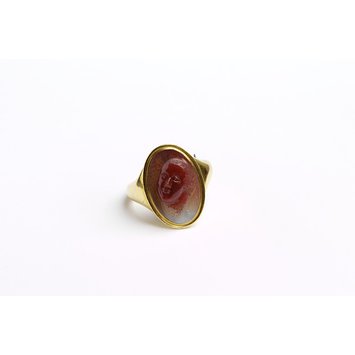 The art of engraving gemstones has been admired since the early days of the Roman empire. It was revived in Europe during the Renaissance, and again in the 18th and 19th centuries. Cameos and intaglios were prized and collected, sometimes as symbols of power and mounted in jewelled settings, sometimes as small objects for private devotion or enjoyment. This gem is in the neo-classical style popular in the late 1700s and early 1800s, when taste in the arts echoed the subject matter and style of the Greek and Roman masters. Thousands of gems were made in this style in Italy and brought back by British Grand Tourists, who went there to visit the newly-discovered classical antiquities and archaeological sites. In Greek mythology Niobe, wife of the king of Thebes, was punished for boastfulness by the gods Apollo and Diana who killed all her children. Versions of this type of head appear on several cameos and echo that of one of the daughters of Niobe (Niobids) in a Greek sculpture of around 440 BC now in the Museo Nazionale, Rome, in which she is shown struck in the back by an arrow as she flees the massacre.

This gem was part of the collection of the Reverend Chauncy Hare Townshend (1798-1868), who bequeathed his important collection to the South Kensington Museum in 1869. Although the gemstone collection is not as comprehensive as that found at the Natural History Museum, it is of particular historic interest as its formation pre-dates the development of many synthetic stones and artificial enhancements. All the stones were mounted as rings before they came to the Museum. Some are held in the Sculpture Section, other more elaborately mounted ones in the Metalwork Section.

As well as being a clergyman, collector and dillettante, the Reverend Townshend wrote poetry. He met Robert Southey in 1815 and through him the Wordsworths, the Coleridges and John Clare. He was a friend of Charles Dickens and dedicatee of his novel 'Great Expectations'.

Engraved gemstones based on classical models were widely produced and collected in Italy in the eighteenth century. Many were brought back by British Grand Tourists, and important collections were formed. Heads of this type relate to classical sculptures such as that of the wounded Niobid from the Sallustiani Gardens in Rome, dating from around 440 BC, now in the Museo Nazionale Romano, Rome.

Cameo, oval red shading to grey chalcedony, set in gold ring, depicting a female head, possibly one of the daughters of Niobe, Italy, about 1800

Attribution note: Pale grey chalcedony with a cloud of many extremely fine red granular inclusions. The inclusions are concentrated towards the upper part of the cameo and have been used to give definition to the relief. 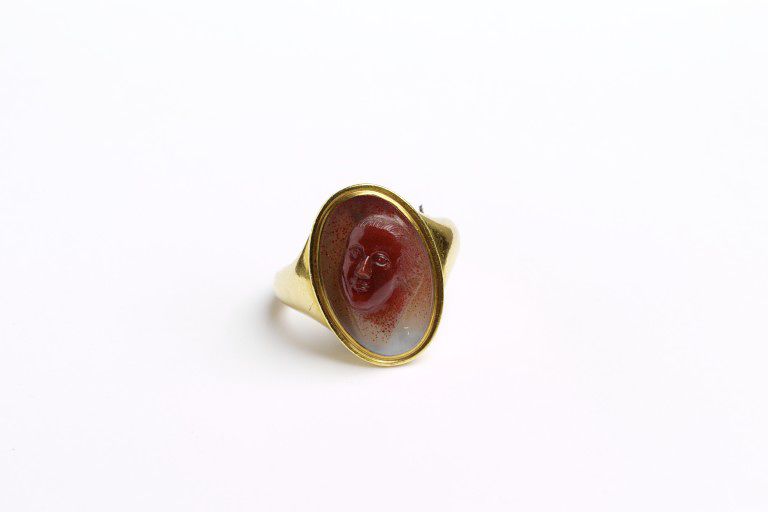