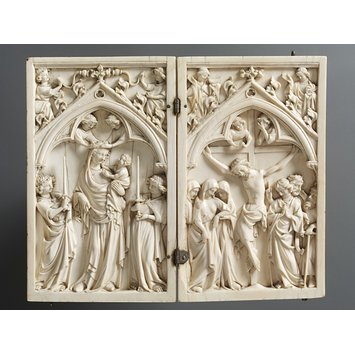 The Virgin and Child and the Crucifixion

This is an ivory diptych made in Paris in France about 1340. On the left leaf the Virgin, crowned by two flying angels, stands holding the Child, attended by two angels bearing candlesticks. On the right leaf is the Crucifixion. The present diptych can be grouped with two others (V&A Mus. no. 294-1867) and one in the Courtauld institute. They share a number of unusual characteristics, in particular the carefully delineated morses worn by the candle-bearing angels and their lack of wings.

Ivory diptych carved in high relief. Both leaves depict a single scene, beneath a trefoil arch, supported on corbels and surmounted by a simple roll moulding and small gable, the tympanum of which is pierced with a small trefoil oculus. The gable is topped with large foliate crockets and finials, and each leaf bears a simple moulding along the upper edge of the frame.

On the left leaf the Virgin, crowned by two flying angels, stands holding the Child, attended by two angels bearing candlesticks. The Christ-Child reaches towards his mother’s veil, while above, two angels emerge from behind the arch to place a crown upon her head. In the spaces above the gable two three-quarter length angels swing censers with their right hands while holding incense boats in their left. On the right leaf is the Crucifixion with two weeping angels, the Virgin, two Maries, St. John and two Jews. To the left stands a group of three women; at the front, the Virgin swoons, and is supported from behind by the two Maries. To the right St. John the Evangelist stands grieving, his hand clasped in prayer, while the two Jews are shown behind in conversation; one holds a speech scroll and the other a tau-shaped walking stick. Above the crucifix, two half-length grieving angels appear from behind the arch. In the space above the gable, two further three-quarter length angels are shown, holding the sun and the moon. 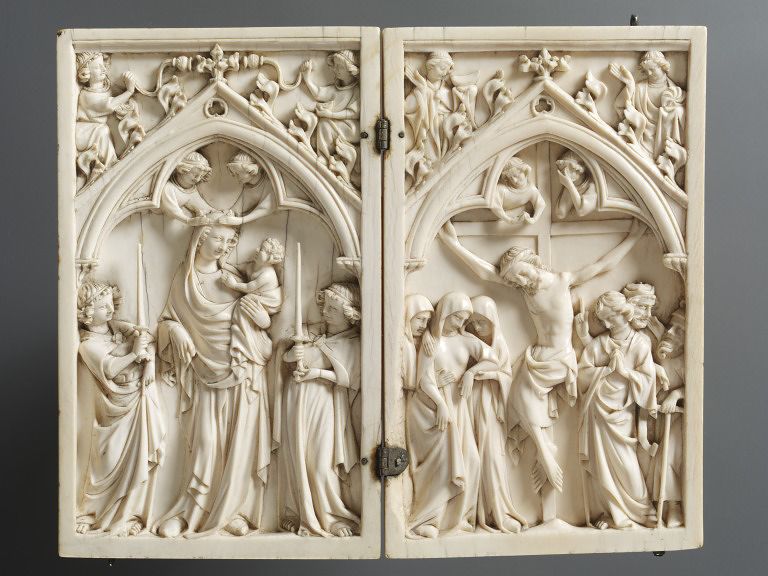