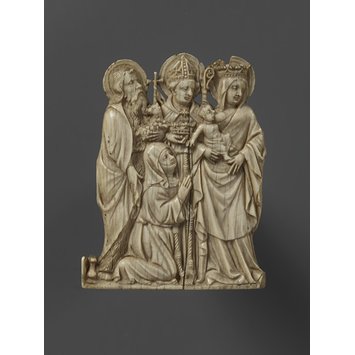 Virgin and Child with Saints

This is an ivory group made in the early 15th century, in France, probably Paris. The pierced relief depicts the Virgin and Child with St. John the Baptist, St. Louis of Toulouse and a kneeling nun. The relief probably originally formed the left leaf of a small diptych, with the Crucifixion on the right leaf. The format of the group, with a kneeling donor and intercessory saints standing behind, was popular amongst the commissioners of courtly devotional images at the end of the fourteenth and beginning of the fifteenth century. The style of the figures and the low relief carving, coupled with a love of detail and preciosity, immediately link the relief to other ivory carvings associated with the Parisian and Franco-Flemish workshops of the early fifteenth century.

Carved ivory group from a pierced panel depicting the Virgin and Child with St. John the Baptist, a Bishop wearing a crown (St. Louis of Toulouse?) and a kneeling nun. The crowned Virgin is shown with the suckling Christ-Child on the right; on the left is St John the Baptist with the Lamb of God and the cross with banner, and in the centre St Louis of Toulouse (1274-97). The latter is mitred, as Bishop of Toulouse, holds a crozier, and is furhter identifiable by the crown he holds and the Franciscan knotted rope girdle. Kneeling in front of the group is a Franciscan nun, not haloed as the other three figures are and so presumably not St Clare; instead she probably represents the owner of the piece. The pierced relief was once contained within an ivory borde, the figures flanked by a slim column at each side. 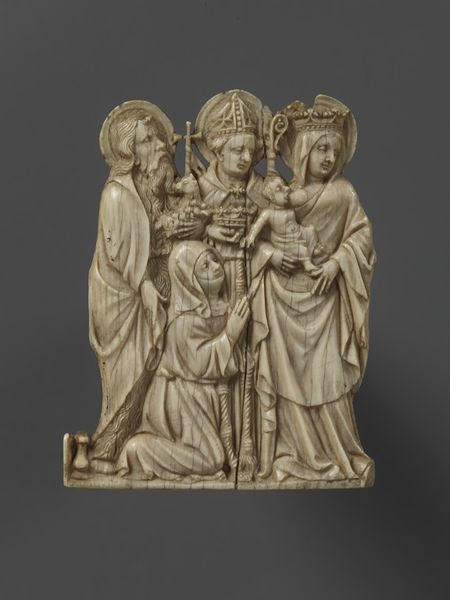