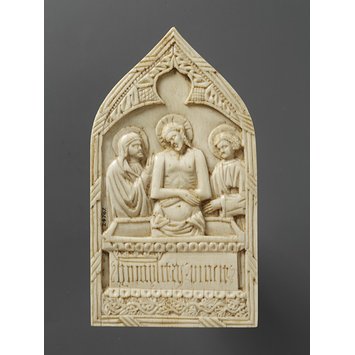 Christ as the Man of Sorrows

This is an ivory pax made in the second quarter of the 15th century in North Italy, possibly Milan. The pax is carved in low relief depicting Christ as the Man of Sorrows attended by the Virgin and St. John, under a trefoil arch. The base of the tomb is ornamented with foliage, on the front are the words HUMYLITAS VINCIT (Humility Triumphs) in Gothic character, the first letters surmounted by a coronet. On the back is a bit (briole) in low relief. The inscription and the bit device belong to the Borromeo family.
A pax is a tablet or board, sometimes of silver, usually decorated with a Christian religious representation. A pax was used at the end of mass as part of the ‘Kiss of Peace’ ritual after the Angus Dei. First the priest would kiss the tablet, then the members of the congregation. England was precocious in introducing the pax, but references abound elsewhere from the beginning of the fourteenth century onwards. Paxes could be made from many materials, including wood, copper, silver and gold, as well as ivory.
The earliest, fourteenth-century, examples are invariably decorated with the Crucifixion, but the imagery rapidly diversified to take in other scenes connected with the Christ’s Passion and Sacrifice. By the fifteenth century the choice had expanded, with many scenes of the Virgin and Child.

Ivory Pax, carved in low relief depicting Christ in the Sepulchre attended by the Virgin and St. John, under a trefoil arch. The base of the tomb is ornamented with foliage, on the front are the words HUMYLITAS VINCIT in Gothic character, the first five letters surmounted by a coronet. On the back is a bit (briole) in low relief. The inscription and the bit device belong to the Borromeo family.
Christ is shown upright in the sepulchre with his arms crossed in front of his body;

Longhurst, Margaret H. Catalogue of Carvings in Ivory. London: Published under the Authority of the Board of Education, 1927-1929, Part II, p. 61
Inventory of Art Objects acquired in the Year 1867. Inventory of the Objects in the Art Division of the Museum at South Kensington, arranged According to the Dates of their Acquisition. Vol. 1. London : Printed by George E. Eyre and William Spottiswoode for H.M.S.O., 1868, p. 8
pp. 96-97
Maskell, W., A Description of the Ivories Ancient and Medieval in the South Kensington Museum, London, 1872
pp. 276-77
Westwood, J O. A descriptive catalogue of the Fictile Ivories in the South Kensington Museum. With an Account of the Continental Collections of Classical and Mediaeval Ivories. London: Eyre & Spottiswoode, 1876
p. 214
Richter, T., Paxtafeln und Pacificalia. Studien zu Form, Ikonographie und liturgischem Gebrauch, Weimar, 2003
part 1, pp. 406-407
Williamson, Paul and Davies, Glyn, Medieval Ivory Carvings, 1200-1550, (in 2 parts), V&A Publishing, Victoria and Albert Museum, London, 2014
part 1, pp. 406-407, cat. no. 143 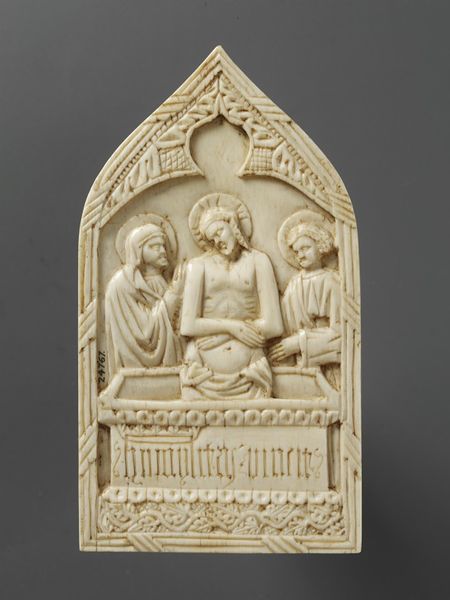