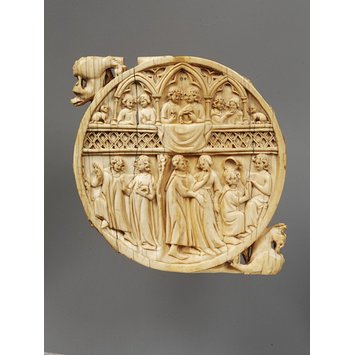 an Assembly of Lovers

This is an ivory mirror back, depicting an assembly of lovers, made in Paris or possibly Cologne, at the beginning of the fourteenth century.

During the 14th century specialist ivory craftsmen carved both secular and religious objects in great numbers. Although Paris was the main centre of production, other workshops emerged in Italy and Germany. Some of the craftsmen may have been trained in Paris as their work often combines French and local styles.

Carved ivory mirror case, depicting courting scenes. It is effectively divided into two.
In the upper part are three couples looking over a balcony surmounted by three trefoil arches; the central couple occupy the position of honour, with a cloth draped over the balcony, the lady holding a flowered crown and the gentleman offering a rose to be added to it.
Two seated dogs occupy the triangular spaces at the corners.
Below, in a garden, are three more couples: on the left the young man places his left arm around the lady's shoulders and points with his right hand, while she holds a small dog in her left arm; in the centre, a gentleman approaches a lady wearing a belted gown and tight bonnet, caressing her chin with his left hand and patting her groin with his right. And on the right the man kneels before the woman, presenting his heart to her between his hands and being crowned. Two long-tailed monsters (there were originally four) crawl along the rim.

Paris (or possibly Lower Rhenish (Cologne), made)
Cologne (possibly, made) 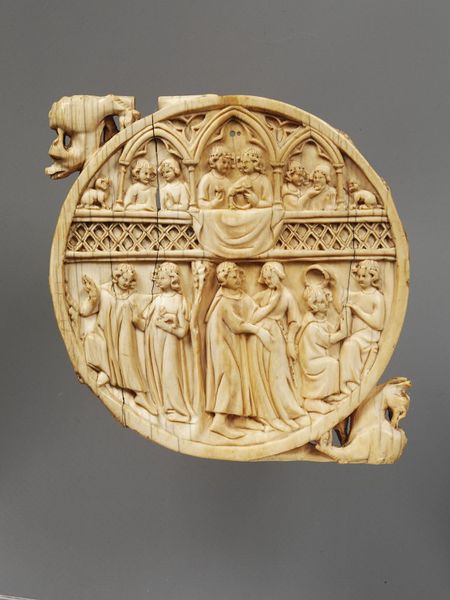