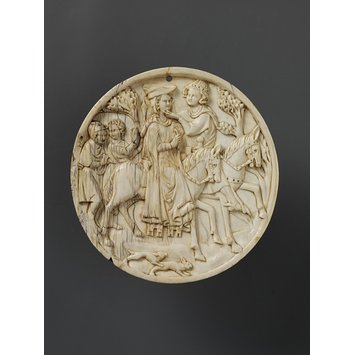 This is an ivory mirror back, made in Cologne or France, in about 1320, depicting a hunting party. During the 14th century specialist ivory sculptors carved both secular and religious objects in great numbers. Although Paris was the main centre of production, other workshops emerged in Italy and Germany. Some of the craftsmen may have been trained in Paris, since their work often combines French and local styles. Mirror cases and combs with scenes from the Romance tradition formed an essential part of the dressing case of a wealthy lady or gentleman.
Gothic ivory mirror backs survive in considerable numbers. The ivory cases themselves, usually between 8 and 14 cm in diameter, consisted of two paired ivory discs (described here as ‘mirror backs’), often with four crawling monsters or lions (or leaves) carved around the outer edge. These ornamental features would transform the circle into a square and make the opening of the case easier, although their vulnerability to breakage is now all too evident.
The majority of the ivory mirror cases and their leather boxes must have been purchased as expensive gifts, to be presented by the wealthy élite to their friends, family and lovers, and often as wedding presents. The subject matter of the mirror backs was almost exclusively secular.

Carved ivory mirror case, depicting a hunting party with a knight and lady riding through a wood. The lady wears a hat with pointed brim, and the gentleman a jewelled fillet. He turns and rests his right hand on her shoulders while touching her chin, as if to turn her head towards him, with his left hand. Behind are two attendants, one holding a spear in his left hand; below a dog chases a rabbit. The rim is plain.

Cologne (or France, made) 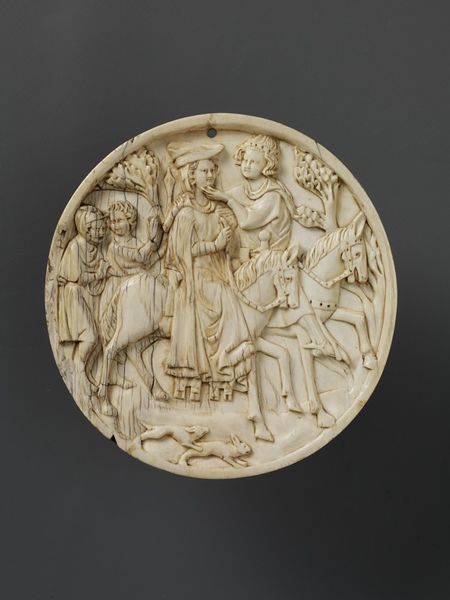