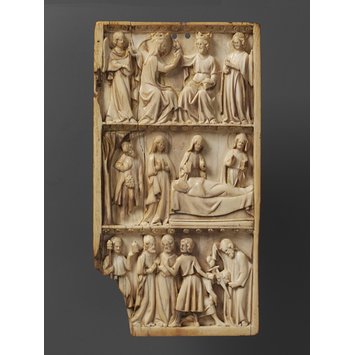 Right leaf of a diptych

This is the right leaf of an ivory diptych, made in about 1275-1300 in Paris, France. The leaf is divided into three tiers separated by bands of rosettes, depicting the Coronation of the Virgin, the Death of Judas and the Entombment, and below the Betrayal.

This curious diptych leaf bears a number of iconographic and compositional peculiarities. Most noticeably, the scene of Judas hanging himself appears to be out of order, in the second register. It should take place between the Arrest of Chirst and his trial before Pilate. Here is instead appears immediately before an unprecedented scene of the three Maries appearing a Christ's sepulchre, apparently before his Resurrection, since his body is shown still beneath its shroud. The unusual order of the scenes makes it difficult to reconstruct the missing left leaf of the diptych. Stylistically this diptych has been executed in a characteristic manner, with large areas of background left plain, contributing to a feeling of isolation around the doll-like figures.

A leaf from a diptych in three tiers separated by bands of rosettes, depicting the Coronation of the Virgin, the Death of Judas and the Entombment, and below the Betrayal. The scenes read upwards, and where applicable from left to right. The lowest register depicts the arrest of Christ. On the left stands a figure holding aloft a lantern, while in his other hand he holds a mace. The centre of the composition is formed of a group of three figures: Judas raises his right hand with his palm towards his chest, Jesus stands passively with his arms across his stomach, looking towards Judas, and a man grasps at Christ's collar with his left hand. On the right, St Peter cuts off Malchus's ear with a sword. The middle register depicts Judas's suicide on the left, with the majority of the register given over to the unusual depiction of the Entombment; the body of Christ is shown lying in the tomb covered by a shroud, while the three Maries watch over him, the Magdalene with her ointment jar in the centre. The top register depicts the Coronation of the Virgin, with standing angels holding large candles to either side. The lower left hand corner is broken away.

France (content: The Betrayal of Christ, The death of Judas and the Entombment, The Coronation of the Virgin, made)

Leaf from a diptych, ivory, depicting the Coronation of the Virgin & scenes from the Passion, France (Paris), ca. 1275-1300 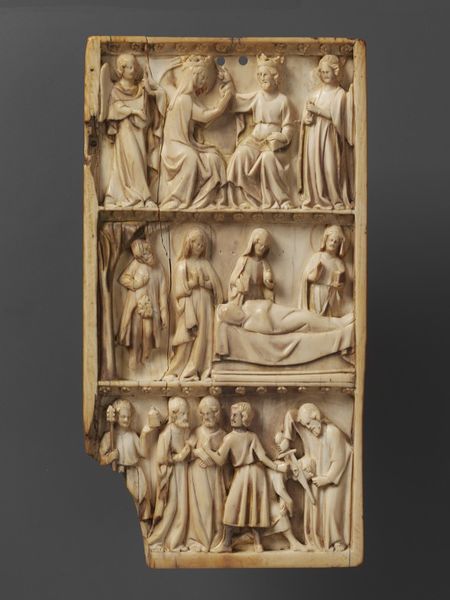