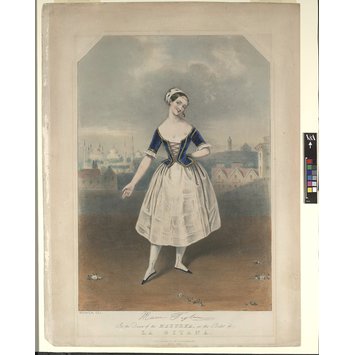 Marie Taglioni (facsimile signature) / In the Dance of the Mazurka, in the Ballet of / La Gitana.

The great 19th century ballerina Marie Taglioni was famous for her ethereal roles, like the Sylph in La Sylphide, but she just as capable of playing human characters and performing in other dance styles. In 1838 she appeared in La Gitana (The Gipsy), a typical Romantic ballet story of a child stolen from her aristocratic parents and brought up as a gipsy before being restored to her family. This gave her the opportunity of showing her prowess in national dances, in this case, the dances of Poland and Spain. The print shows Taglioni dancing the Polish mazurka, in the first scene. The action was set at a fair in the Russian city of Nijni Novgorod, although the buildings in the print suggest a mixture of Istanbul and Italy.
By this time a recognisable 'ballet' costume had evolved - a low-cut pointed bodice, or a little blouse worn under a laced bodice, and a bell-shaped, knee-length skirt formed of tiers of tarlatan with a diaphanous top layer. To this were added various details indicating indicate the character, status or nationality of the particular role.

A dancer stands against an townscape with, to the left, domes and minarets and Italianate style buildings to the right. She stands on her left leg with the foot turned out, her right leg forward with the foot pointed; her body faces the viewer, her right arm is extended downwards and her left arm is bend with the hand tucked behind her back; her head is inclined towards her left shoulder, her eyes looking at the viewer. Her hair is bound into a broad white band dotted with black with a tassel hanging on her right side; she wears a white blouse with a wide, very low neckline, over which is a dark blue bodice with lappets over the hips and elbow length sleeves ending in a white frill; the bodice is edged in 'gold' and is laced with red ribbon across the front. The knee-length skirt is shaded to suggest moiré silk. The ballet slippers are dark blue and the white stockings have red clocks. On the ground are flower sprays and posies. The print area is cut across the upper corners.

La Gitana was originally choreographed by Filippo Taglioni for his daughter Marie and danced by her at the Bolshoi in St Petersburg in 1838; it was revived with dances by Antonio Guerra at Her Majesty's Theatre in London in 1839.
This print shows her dancing the Mazurka in scene 1, which was set in a fair in Nijni Novgorod. In including national dances, like the Mazurka and cachucha, Taglioini was challenging her great rival, Fanny Elssler on her own ground and showing that her range was considerably wider than her famed ethereal, intangible Sylph in La Sylphide might suggest.
The print is part of the collection of dance prints amassed by Marie Rambert and her husband, Ashley Dukes in the first half of the 20th century. Eventually numbering over 130 items, it was one of the first and most important specialist collections in private hands.
Rambert bought the first print as a wedding present but could not bear to give it away. As the collection grew, it was displayed in the bar of the Mercury Theatre, the headquarters of Ballet Rambert, but in 1968, Rambert gave the collection to the Victoria and Albert Museum. Although it is often referred to as the Rambert-Dukes collection of Romantic Ballet prints, it includes important engravings of 17th and 18th century performers, as well as lithographs from the later 19th century, by which time the great days of the ballet in London and Paris were over.

The large souvenir prints of the Romantic ballet, issued in the 1830s and 1840s, are among the most evocative images of dance in the 19th century. Lithography, with its soft quality, enhanced by the delicate yet rich hand-colouring, was ideally suited to the subject - the ballerinas who dominated ballet in the mid-century and the romanticised settings in which they performed; style and subject were perfectly matched. The lithographs produced in London are notable for capturing the personality and style of individual performers in a theatrical setting. They are a fitting tribute to one of ballet's richest periods.
Before the development of colour printing, the basic black and white prints were hand coloured. There is often considerable variation from one print to another, both in colour and quality of the work. The most important souvenir prints, such as this one, would only have been sent out to the best colourists, and it is often very difficult to tell the best hand colouring from early colour printing. In the days before photography, such lithographs were expensive souvenirs, bought by the individual dancer's admirers.

Marie Taglioni dancing the Mazurka in La Gitana. Lithograph coloured by hand after a drawing by J Bouvier, 1839. 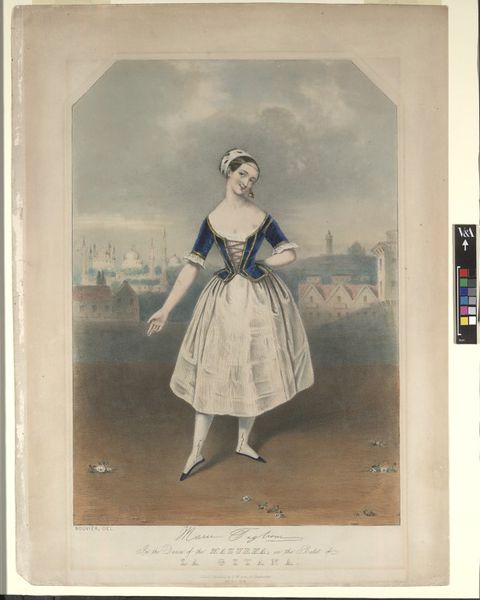