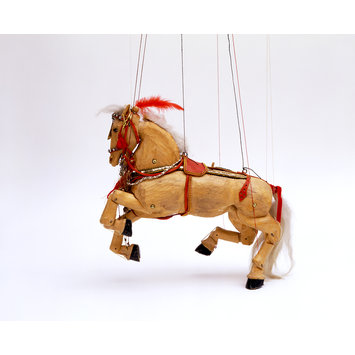 Marionette of a circus horse

Marionette of a circus horse made to perform with a white-faced clown, from of a set of circus figures made by Mary Shillabeer. This balsa-wood marionette was carved and operated by Mary Shillabeer in the 1970s and 1980s, a vivacious artist and illustrator who trained at the Central School of Arts and Crafts but only started carving marionettes in her 70s, carrying on well into her 80s. She especially loved the ability of puppetry to combine painting, sculpture, music and drama, and made these near the start of her career as a carver and puppeteer. They were exhibited in the Royal Scottish Academy in 1976 and performed at the Netherbow Theatre and the Queen's Hall in Edinburgh. Great attention to detail in the carving and in the dressing of the marionettes, especially the horses, has made them marvellously lifelike.

Mrs Shillabeer created various full-scale marionette shows, some of which appeared during the Edinburgh Festival, including Peter and the Wolf, Boite a Jou-Jou (The Toy Box), and Babar the Elephant. Other puppets by Mary Shillabeer are in the Museum of Childhood in Edinburgh and at the Little Theatre in Biggar, near Edinburgh.

Carved wooden marionette of a circus horse with a red leather and gold chain bridle, a red leather saddle, decorative sequined strips from his neck to his flanks, a red feather in his grey mane and a red ribbon on his grey plaited tail. With a spike on his back for attaching the clown made to appear with this horse (S.143:2-1993).

Mary Shillabeer (1904-1992), the maker of this figure, trained as an artist and illustrator at the Central School of Arts and Crafts and moved to Edinburgh in 1942. She started making and manipulating marionettes in her 70s and made this set near the beginning of her career. She made various full-scale marionette shows such as Peter and the Wolf, Jou-Jou, Commedia dell'Arte and Babar the Elephant, some of which are now housed in the collection of the Museum of Childhood in Edinburgh, the Purves Puppets Little Theatre in Biggar, near Edinburgh, and Ian Turbitt Puppets in Glasgow.

Marionette of a circus horse made to perform with a white-faced clown, from of a set of circus figures made by Mary Shillabeer

This is one of a set of circus marionettes, including a ringmaster and a clown, made by the Scottish puppeteer Mary Shillabeer. She began her career as an artist and illustrator, and only began making puppets in her 70s. She then went to create several full-length marionette shows, some of which she performed at the Edinburgh Festival. [57 words]

Balsa wood, cloth, metal and feathers
Made by Mary Shillabeer (1904–92) 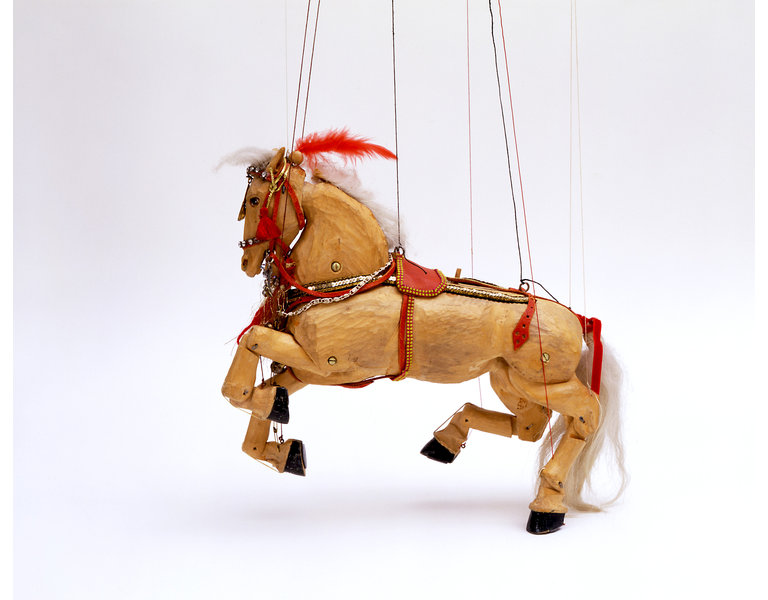