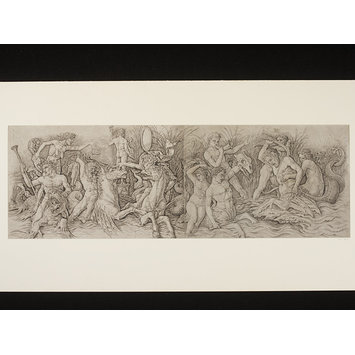 Battle of the Sea Gods

This is the earliest surviving image made from two printing plates and intended for display together, thereby overcoming limitations in the size of printing plates and paper. The left half has a margin and narrow borderline while the right half has no left margin or border, enabling it to be pasted onto the other half to make a complete picture.

The practice of making prints from two plates intended to be joined together became standard from this time, particularly for depicting battles and processions. It suggests that these prints were being made for display on walls and this and the sophisticated subject matter implies a rise in status of prints among collectors.

This belongs to a group of seven prints thought to have been engraved by Andrea Mantegna himself, most dating to between 1460 and 1480. This print shows Mantegna’s use of varied shading lines, with parallel lines and lines have a hooked end creating a zig-zag effect. Mantegna used two sizes of burin to vary line thickness. He also used drypoint, but in this example the lines have worn down and are no longer visible.

The subject of this print is thought to be artistic envy, with the sea-gods being the race of Telchines, who were sculptors and associated with envy in ancient texts. The hag's name is Invidia, (Latin for envy). Mantegna was interested in the antique and visited Roman remains, incorporating the imagery into his work. By 1476 he is known to have owned a sketchbook of 'antique sculpture, of which most are battles of centaurs, fauns, satyrs..'.

Mantegna seems to have taken so few impressions from his prints that even in 1494 Albrecht Dürer could not get one for himself and had to draw a copy. Some elements of Dürer's drawings of this work were used by Hans Sebald Beham for a wallpaper frieze, which in turn acted was source for an ornamental panel by Master C.G. in 1537, an example of the manner in which designs could be transmitted across media.

Companion (the right half) to Dyce.994, intended to constitute a long frieze of a single composition; featuring winged and scaly sea creatures and gods and a goddess, holding various weapons or trumpets.

Battle of the Sea Gods; Companion to Dyce.994, intended to constitute a single composition; Featuring winged and scaly sea creatures and gods and a goddess, holding various weapons or trumpets; Engraving print on paper; By Andrea Mantegna; Mantua, Italy; ca. 1475-1488.

In Mantegna exhibition catalogue (1992) these prints are catalogued as being by Andrea Mantegna himself. 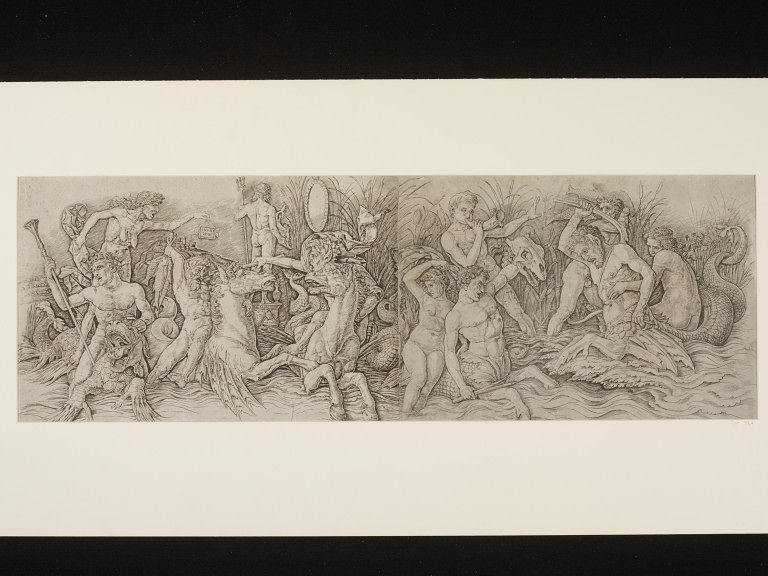