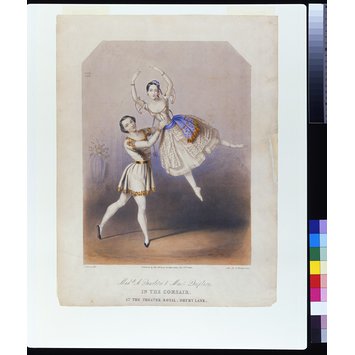 The print shows how the pas de deux (two performers, usually a man and a woman, dancing together) developed in the 19th century. In the 18th century, men were the great dance stars, but ballet in the 1840s focused on the ballerina and the male dancer was reduced to a supporting role. His function was to stand behind the ballerina, helping to support her when she was standing on the tips of her toes, lifting and catching her to increase the illusion of her lightness.
However, it is unlikely that this is an accurate depiction of an actual lift. In reality, it would be impossible to lift even the lightest of ballerinas and hold her at arm's length at this angle to the side; he would have been completely off balance. Similarly, he would hardly be standing so nonchalantly if he had been catching her from a jump. Like many ballet lithographs, the artist is aiming at a depiction of what the movement seemed like, rather than what it was.

In a drawing room setting, with sofa and vase of flowers, a ballerina is lifted by her partner. The man stands on his right leg with the left leg pointed to the back, his head turned to the viewer. He wears a short-sleeved, low-necked, skirted white tunic trimmed with 'gold', with full length white undersleeves trimmed with gold; the black shoes have a small yellow V at centre front. He lifts the ballerina around her waist. Her right foot points to the floor and the left points to the side edge of the print; her arms are curved above her head. Her hair is sleeked down into two long plaits tied with red ribbons. Her low-necked white spotted 'gold' bodice is trimmed with 'gold' braids and has short sleeves with an open frill 'caught' with a brooch; around her waist is a broad blue sash, the ends spotted 'gold' and with a 'gold' fringe. Over the white knee-length skirt is an open-fronted overskirt, spotted in 'gold' with fine vertical 'gold' stripes. Her hair is close to the head and ends in long, thin plaits and to the side is a small blue pill-box hat trimmed with white with a central crescent. The print area is cut across the upper corners.

Adèle Dumilâtre and Henri Desplaces in Albert's ballet The Corsair, which they performed at Drury Lane in 1844. The ballet was very loosely based on Byron's poem The Corsair.
The print is part of the collection of dance prints amassed by Marie Rambert and her husband, Ashley Dukes in the first half of the 20th century. Eventually numbering 145 items, some of which had belonged to the ballerina Anna Pavlova, it was one of the first and most important specialist collections in private hands.
Rambert bought the first print as a wedding present but could not bear to give it away. As the collection grew, it was displayed in the bar of the Mercury Theatre, the headquarters of Ballet Rambert, but in 1968, Rambert gave the collection to the Victoria and Albert Museum; seven duplicates were returned to Rambert, but these are catalogued in Ivor Guest's A Gallery of Romantic Ballet, which was published before the collection came to the V&A. Although often referred to as a collection of Romantic Ballet prints, there are also important engravings of 17th and 18th century performers, as well as lithographs from the later 19th century, by which time the great days of the ballet in London and Paris were over.

Historical significance: The print shows, although not convincingly realistically, a lift in a ballet of the 1840s. In the 18th century, panniered dresses meant the performers danced side by side. With the change in costuming and the spotlight switching to the ballerina, the 19th century saw the development of the pas de deux, in which the male dancer's role was to stand behind his ballerina and lift and support her, thus increasing the sense of her ethereality and weightlessness.

The large souvenir prints of the Romantic ballet, issued in the 1830s and 1840s, are among the most evocative images of dance in the 19th century. Lithography, with its soft quality, enhanced by the delicate yet rich hand-colouring, was ideally suited to the subject - the ballerinas who dominated ballet in the mid-century and the romanticised settings in which they performed; style and subject were perfectly matched. The lithographs produced in London are notable for capturing the personality and style of individual performers in a theatrical setting. They are a fitting tribute to one of ballet's richest periods.
In the days before photography, such lithographs were expensive souvenirs, bought by the individual dancer's admirers.

Adèle Dumilâtre and Henri Desplaces in The Corsair. Lithograph coloured by hand after a drawing by J Bouvier, 1844.

Only the lithographer's address is given: 70 St Martin's Lane 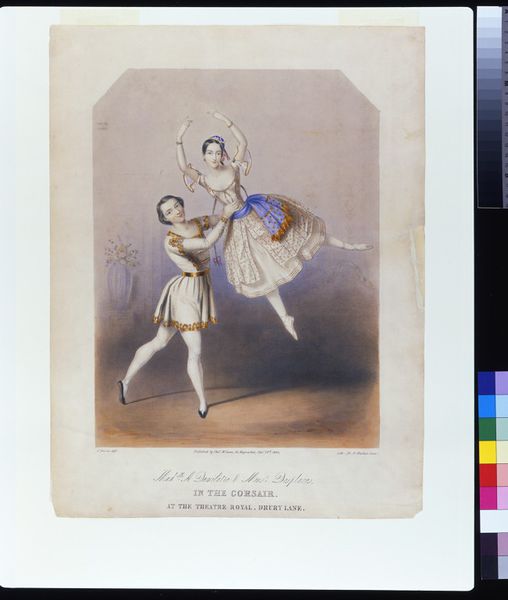