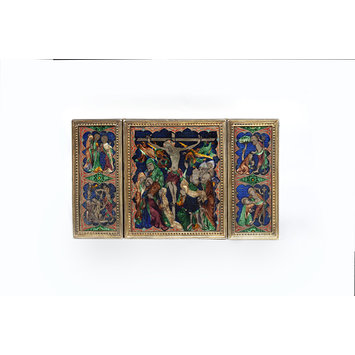 This is an exceptionally fine piece of goldsmiths' work, using a wide range of enamel colours to depict scenes from the life of Christ. It would originally probably have been protected by being kept in a small case, perhaps of leather, worn suspended from a girdle.

Small objects like this would have been used by devout Christians for prayerful meditation. The detail in each episode allows the user to visualise the events as if present. This was a practice recommended by devotional guides of the period, such as the Meditations on the Life of Christ, a text probably written by a Franciscan friar for a woman. This emphasised the importance of imagining the events of Christ's Passion vividly, almost as a spectator. Prayers of this sort might be said in church, in a private chapel, or at home.

Triptych, silver gilt, opaque and translucent enamels, depicting scenes from the life of Christ. Consisting of three panels, enamelled on both sides in a palette of opaque red, black and turquoise, and in translucent blue, green, yellow, light grey and brown. The panels slide into a frame, open at the bottom.
The front shows (centre) the Resurrection; (left) the Mocking and Scourging of Christ; (right) the Descent from the Cross and Christ carrying the Cross.
The back shows (centre) the Crucifixion; (left) the Holy Women at the Sepulchre; (right) Christ appearing to Mary Magdalene and St Thomas.

Bequeathed to the museum by the collector George Salting. Salting, who had a taste for finely detailed, exquisitely finished works of art, tended to acquire most of his collections from the Bond Street dealerships - it is not known when or how he acquired this piece. Nothing is known of its original, medieval provenance.At some point, the triptych has been wrongly reassembled - the original arrangement would reverse the centre panel, so that the scenes would be chronologically coherent, reading anticlockwise, as is often found on ivories.

Historical significance: This object is of particular interest as an example in precious metal of the English interest in Italian trecento art, an interest that can also be traced in manuscripts and ivories of the period.

Small objects like this, decorated mainly with scenes from Christ's Passion, would have been used as aids in personal devotion. In other words, the images would have been looked at when the worshipper was in prayer or contemplation. Devotional treatises of the period, such as St Bonaventura's Meditationes Vitae Christi, emphasised the importance of imagining the events of Christ's passion vividly, almost as a spectator. Images of this sort were perfectly suited to aiding such devotional practices. Devotion of this sort could take place in a church, private chapel or in the home. The small size and precious nature of triptychs of this sort suggests that they were intended to be portable objects, probably kept about one's person. The folding triptych format derives from that used on a much larger scale for altarpieces, or containers for cult statues.

The three panels show the Passion and resurrection of Christ. The detail allows the user to visualise the events as if present. This was a practice recommended by 14th-century devotional guides such as the Meditations on the Life of Christ, a text that was probably written by a Franciscan friar for a woman.

The English links of this enamel have long been recognised. M. Campbell has summed up the similarities between the style and iconography of this piece with works such as the Queen Mary psalter in the British Library of ca. 1310 (the Crucifixion scene); the soldiers of the Resurrection scene parallel those on the Easter sepulchre at Patrington of ca. 1356; some of the cusped frames parallel those on the King John cup of ca. 1340. At the same time, the V&A enamel shows very clear links to international stylistic currents - the Crucifixion scene can be paralleled in various Tuscan works of the early 1300s, whilst other iconographic aspects find parallels in the Parisian manuscript illumination of artists like Jean Pucelle and Jean le Noir (for example, the depiction of Christ's head as shrouded during his mocking).

The range of colours used on this piece, and the quality of detail in the scenes are exceptionally fine. Campbell has described this triptych as 'technically the most outstanding of the group [of English translucent enamels]'. This fact, along with the Italianate element, which seems to have had its greatest prominence in English art between ca. 1320 and 1370, suggests a date in the middle of the century, slightly later than other English enamelled images of this type. 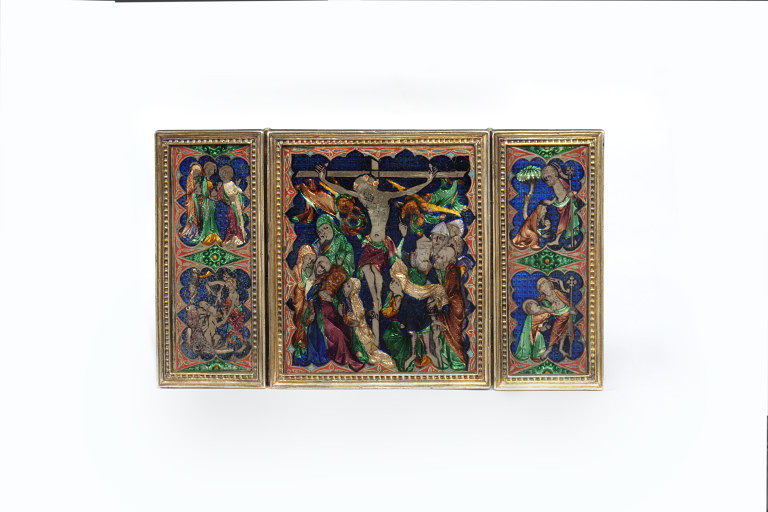