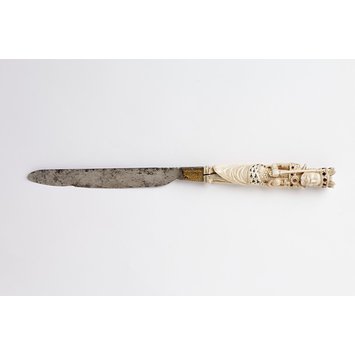 The knives are from a set of fourteen with carved ivory handles representing the kings and queens of England, from Henry I to James I. The inscriptions on the blades name each monarch depicted. This one shows Richard I.
Knives have been used since prehistoric times, but the history of knives, forks and spoons for eating in Europe probably commenced in the fourteenth century, and their use became accepted by the sixteenth century. Until the late seventeenth century it seems to have been common practice for people to carry their own cutlery, often in a leather case.
Ebony, ivory, fish skin, tortoiseshell, amber, bone, horn and shell were all popular for decorating cutlery. Around 1730 ceramic handles were introduced to Europe from China. Although cutlers were required by their guilds to be able to make a complete knife, handles of carved ivory, silver, bronze and glass were usually imported or made by specialist craftsmen.

Knife, steel and the handle of ivory, carved with a portrait figure of Richard 1st, King of England, the neck of the blade damascened with gold. The blades are etched with the name of the sovereign. Cutler's mark: a dagger for the London Cutlers' Company. Maker's mark: a crowned diamond, possibly for Arnold Smyth. The handles are inset with semi-precious stones and glass paste.

Mark: a dagger for the London Cutlers' Company
on blade

Mark: a crowned diamond
Possibly for Arnold Smyth; on blade

Bought in 1869 from Durlacher , London. On acquisition reports on these knives [in the Art Referees' Report, Vol 1 (1868-March, 1869), 22903 ff. and J.C. Robinson's Reports, June 1866-September 1867, 12991 ff.] stated that they had been "recently forwarded from Russia" and [ibid Vol. 6 (September 1867-June 1868), 2389 ff.] that the knives came from the collection of Countess Kucheleff in St. Petersburg (Museum records). This has not been verified.
Angus Patterson has plausibly suggested that the knives may originally have formed a set of 24 knives, since some monarchs are missing, and this larger number is more usual for a set of cutlery.

Knife (from a set of fourteen), ivory and steel with damascened gold, handles representing kings and queens of England, from Henry I to James I, mark of Arnold Smyth (possibly), Britain (London), dated 1607 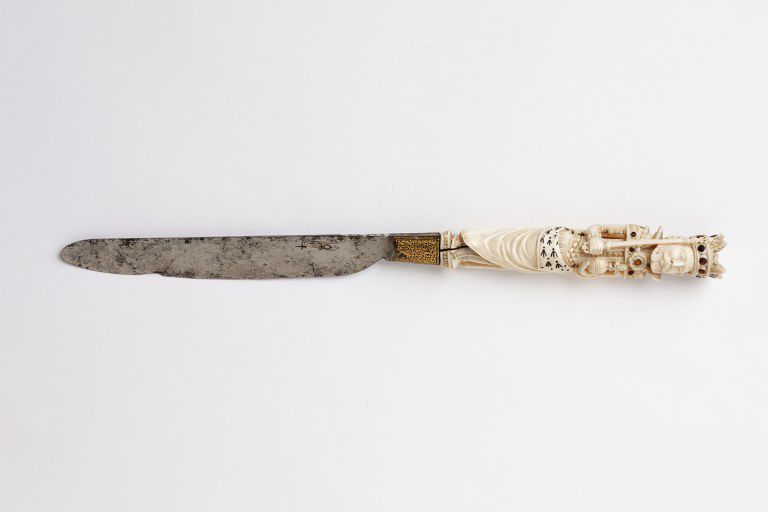