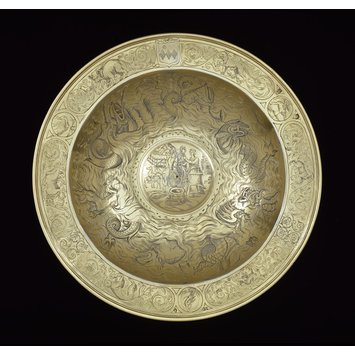 This is one of six related silver-gilt dishes in the V&A collections which may originally have been part of a larger group of twelve. They are rare examples of silver intended for dessert, or 'banqueting', a costly course of fruits and sweetmeats which came after the main meal and was often enjoyed in a separate location. At the royal palaces of Hampton Court and Nonesuch, a select few (perhaps six to eight people) would have had their senses pleased in an intimate banqueting house where all accoutrements were as luxurious as the food served. Dessert was an opportunity for hosts to flatter guests with very expensive rareities such as refined sugar from Cyprus or Madeira. A silver dish for meat would have been plain, but dessert dishes, like this one, were elaborately decorated with fine engraving or chasing (designs hammered into relief) and were often gilded. Sometimes they were made from another precious material such as mother of pearl, painted glass or tortoiseshell.

The mid 17th century coat of arms engraved on the V&A dishes hides an earlier erased coat of arms. Faint traces of the earlier one can be seen, enough to identify the original owner as William Cecil, 1st Lord Burghley, who was Lord Treasurer and chief advisor to Elizabeth I and one of the richest and most accomplished patrons of the arts of the 16th century. The lack of wear on the dishes raises the possibility that while they followed the pattern of dessert dishes, they may have been used primarily for display on a sideboard or 'buffet' rather than for use. The exquisite and complex scheme of engraving on each dish would certainly be seen to better advantage. The engraver combines a border of fashionable arabesque ornament (scrolls of pointed leaves) encompassing birds, animals and monsters with fantastical marine scenes in the well of each dish surrounding a biblical scene in the centre.

Struck on the rim of the dish:
Maker's mark 'RF' in a shaped punch, probably Roger Flint; Sterling mark, a lion passant; London town mark a crowned leopard's head; date-letter 'q' in a shield-shaped punch for 1573-1574.

A shield charged with three lozenges conjoined in fess within a border; above the lozenges an anulet.
The arms are pounced on the rim and replace an earlier coat positioned there. They are probably those of William Montagu of Oakley, Bedfordshire (died 1691).

Three identical coats of arms were originally engraved on the rim of this bowl. Two have been mostly erased and hidden by scrolling foliage ornament, the third is covered by a later coat of arms. Close examination of these traces reveals the original arms to be those of William Cecil, first Lord Burghley (1520-98), Lord Treasurer to Elizabeth I (Schroder: 2004, pp. 3-4) . The later arms are those of the Montagu family, and may refer to William Montagu of Oakley, Bedfordshire, fifth son of Lord Chief Justice Sir Edward Montagu (d. 1556).

This is one of six similar engraved plates, all with Montagu arms, which appear to have remained in the possession of the family from the seventeenth to the twentieth centuries, when they were sent to auction at Christie's, London, by Captain Frederick Montagu who had inherited the plates from his uncle, Andrew Montagu of Ingmanthorpe Hall, Yorkshire, and Papplewick Hall, Nottinghamshire. The Museum purchased all six plates at the sale on July 3rd, 1946.

Silver-gilt dish, London hallmarks for 1573-74, mark of Roger Flint, engraved with scrolling ornament, sea monsters and a central scene from the biblical Book of Genesis showing Rebecca at the well holding up a jug to two travellers, whose camels are in the background.

SET OF SIX SPICE PLATES
Silver-gilt
London, 1573-4
Mark: FR conjoined
The engraved sea-monsters are similar to engravings by Adriaen Collaert of Antwerp (about 1560-1618) and the birds in roundels derive from engravings by Virgil Solis of Nuremberg (1514-1562). The engraving, of unusually high quality, is attributed to the engraver P over M, presumably a foreign visitor to London. The arms of Montague on the rim have been added later.
Acquired with funds from the Murray Bequest and the National Art- Collections Fund
M.55 to F-1946 [pre-2001]
7. Four spice bowls
Silver-gilt
London, 1573-4
Mark of Roger Flynt
From a rare Elizabethan silver dessert or banqueting set. The rich engraving and gilding marked the importance of the final course of the meal, the 'banquet', which usually consisted of expensive sugar-based sweetmeats and fruit. The engraving on the rims, wells and centre of each bowl is in three distinct styles but the sources have not yet been precisely identified. The centres depict the biblical stories of 'Abraham entertaining three angels', ' Rachel at the well', 'Meeting of Isaac and Rachel' and 'Jacob steals the blessing of Isaac'. A possible source for the marine creatures engraving in the wells is the work of Adriaen Collaert of Antwerp, who published designs in the late 16th century.
M. 55 a, c, d, e-1946 [2002 -]
Treasures of the Royal Courts: Tudors, Stuarts and the Russian Tsars label text:

This is one of a set originally made for William Cecil, 1st Lord Burghley, Lord Treasurer to Elizabeth I. The elaborate arabesque borders frame biblical scenes.

This one features Rebecca at the Well. The sophisticated decoration shows that the set was intended for display rather than use. 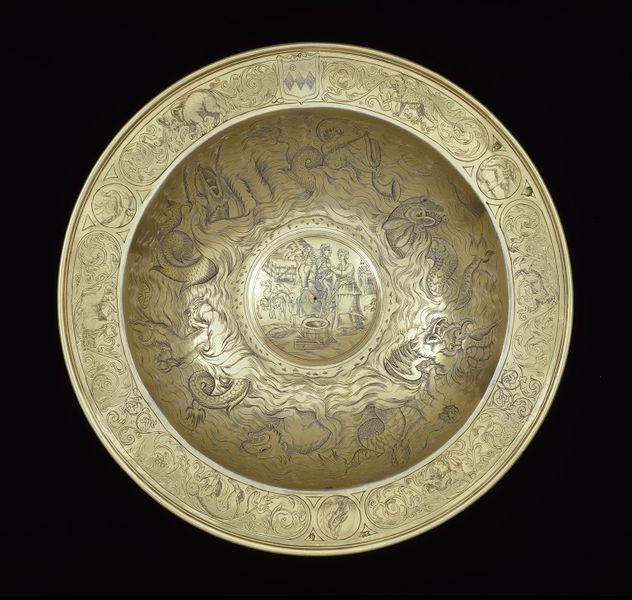