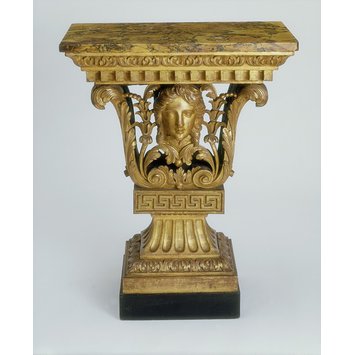 Object Type
This console table was one of a pair made in an architectural style for the interior of Chiswick House. Tables consisting of carved bases supporting a marble top were common in Italy from the 16th century. This table was deliberately designed to imitate Italian examples.

People
The table was designed by William Kent for his patron, Richard Boyle, 3rd Earl of Burlington. Burlington began work on his villa at Chiswick (see museum no. E.352-1944) in 1724, after his second Grand Tour to Italy. The villa was inspired by the work of the Italian architect Andrea Palladio (1508-1580) and Kent was commissioned to design its furniture and interior decoration.

Ownership & Use
Although intended for the sculpture gallery at Chiswick, these tables were recorded in Lady Burlington's bedroom in the inventory of the contents of the villa compiled in 1770. With other furniture from Chiswick, they passed by descent to the Dukes of Devonshire and were moved to Devonshire House, London in the late 19th century, and to Chatsworth, Derbyshire in the 20th century where the other table remains.

A gilt pinewood console table with a rectangular Siena marble top, the frieze decorated with acanthus leaves above a dentil moulding and supported on acanthus scrolls and garrya husks centred by a female mask. With a Greek-key frieze on the waisted fluted pedestal and with a rectangular platform base.

One of a pair of tables which were made for Richard Boyle, third earl of Burlington(1685-1748) for Chiswick House; his daughter married theMarquess of Hartington(later Duke of Devonshire) and Chiswick and its contents were inherited by her husband after her death and passed by descent to successive Dukes of Devonshire. The 'Dining Room' label on the reverse records that the tables were moved to the Link Building, at Chiswick, which was used for dining. The tables were moved to Devonshire House, London later in the 19th century; to Chatsworth, Derbyshire in the 20th century, where the pair can still be seen; this table was sold from Chatsworth and belonged to R.A.Harrari O.B.E.; Sotheby's 30 April 1971 lot 114; bought by the V&A.An early example of furniture designed by an architect for a newly created Palladian setting. The designer, William Kent, was a close friend of the patron, the amateur architect, Richard Boyle, third earl of Burlington. They met on the Grand Tour in Italy, where Burlington studied the architecture of Andrea Palladio (1508-80). The villa at Chiswick was inspired by Palladio's Villa Rotunda at Vicenza and built to Lord Burlington's designs between 1724 and 1727. The interior was decorated and furnished to the designs of William Kent by a team of craftsmen including cabinet-maker Benjamin Goodison and carver and gilder John Boson.

Supplied for the Sculpture Gallery at Chiswick House, LondonDesigned by William Kent (born in Bridlington, East Yorkshire, 1685, died in London, 1748); probably carved by John Boson (active 1720- after 1743)
Made in London

Historical significance: The table's pedestal design is dominated by a central female mask flanked by acanthus scrolls and husk festoons. It refers to the Roman architect Vitruvius's story of the origin of the Corinthian capital: that a basket placed on an acanthus plant broke into leaf. Vitruvius regarded the Corinthian order of architecture as having feminine qualities. The design is original in its adaptation of architectural elements to create a new form of furniture.

The pair of tables may have originally been intended for the Sculpture Gallery at Chiswick, although they were recorded in Lady Burlington's bedroom in an inventory of 1770. This was published by Treve Rosoman in 'The decoration and use of the principal apartments of Chiswick House, 1727-70', The Burlington Magazine, Volume CXXVII, no.991, October, 1985,pp.663-677. The Greek key frieze on the waisted fluted pedestal picks up the same motif which occurs at dado height beneath the four niches for sculpture in the Gallery. This is 14.5 cms deep, whereas on the tables it is just over half that height at 7.5 cms. The central female masks are echoed by those on the mantelpieces in the Octagon and Circular rooms which are situated at either end of the The 'Dining Room' label on the reverse records that the tables were moved to the Link Building, at Chiswick, which was used for dining.

Designed by William Kent for Lord Burlington's villa, Chiswick House. The pair to this table is at Chatsworth, Derbyshire.

Museum No. W.14-1971 []
British Galleries:
This table is one of the earliest documented pieces of Palladian furniture. The form of the giltwood frame was based on the capital of a Corinthian column. The Roman writer, Vitruvius (70-15 BCE) had written that the Corinthian capital was first copied from a basket, found with the leaves of an acanthus plant growing through it. [27/03/2003]

Probably made by John Boson (active 1720-43). Boson specialized in architectural carving and the production of marble chimneypieces. He supplied both carved stonework and furniture for the interiors at Chiswick. He also worked to Kent's designs for furniture for the Gallery and Drawing Room at Kew Palace for Frederick, Prince of Wales. A carved giltwood mirror in the V&A, Museum number W.86-1911 is almost certainly the 'Rich Tabernacle' which hung as a pier glass in the Drawing Room at Kew. The style of the acanthus leaf carving on this mirror is close to that on the Chiswick console table and supports the attribution to Boson. The design of much of the Palladian furniture of this period is attributed to Kent and the Chiswick console table is a rare documented example.

Attribution note: one of a pair
Reason For Production: Commission 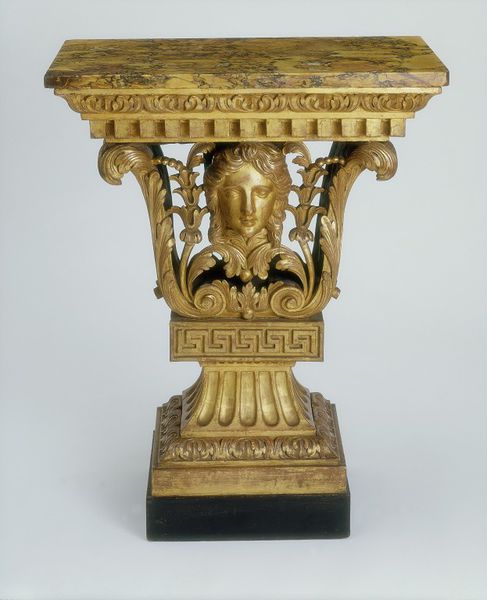