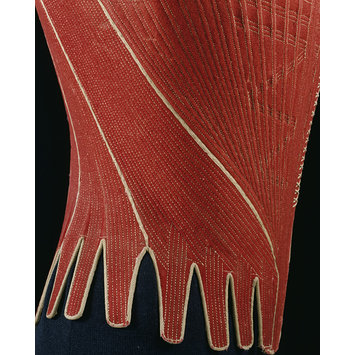 Stays were an essential item of underwear for women during the 18th century. By the 1780s, the fashionable torso consisted of an inverted cone shape. Achieving smoothness of profile and firmness of contour were the primary function of 18th-century stays, rather than emphasising the bust or constricting the waist. Although custom-made and very intricately designed, stays were usually very plain. On these stays a simple silk ribbon and linen tape serve as decoration and functional finishings.

The narrow rows of very fine, even handstitching form the compartments into which thin strips of whalebone were inserted. Although the stays appear very rigid, whalebone was quite flexible. It had the added advantage of softening with the heat of the wearer’s body, allowing the stays to mold to her shape. When worn, the shaped and boned tabs at the lower edge would splay over the wearer’s hips, giving further fullness to the petticoat tied at the waist over the stays.

These back-lacing stays of red wool have a high narrow back with a wide curving decolletage and a point in front, about 5 cm below the waistline. The white lacing up the centre front is decorative. The centre front piece is very wide at the top and narrow at the bottom, causing the two side pieces on each side curve round from back to front. There are two back pieces on each side of the lacing, Below the waist there are 19 tabs. The stays are laced through 13 eyelets on each side arranged asymmetrically. The wool backed with either linen or canvas, and stitched with linen thread to form the compartments for strips of whalebone between 4 and 5 mm wide, running vertically and diagonally. The stays are lined with glazed linen and the edges bound with linen twill tape. Plain weave linen tape fastens the shoulders. White silk braid forms the decorative lacing at the front. White silk ribbon covers the seams. There is a centre busk of whalebone about 2 cm wide. Another 2cm strip of whalebone runs horizontally across the upper front edge. Whalebone strips of 1cm reinforce behind the seams. The shoulder straps, each with an eyelet, extend from the front and fasten with tape through an eyelet at each shoulder back.

The stitching and whalebone follow the diagonal shaping of the stays at the side; essential to form the curvilinear torso so desirable in the 1780s. When worn the shaped and boned tabs at the lower edge splayed over the hips and gave added fullness to the petticoat tied at the waist over the stays.

Historical Fashion in Detail The 17th and 18th Centuries

Women's underwear had two functions in the 18th century: hygienic and structural.

Stays and hoops were structural garments, designed to create a fashionable silhouette. Stays, the antecedent of the corset, formed a rigid foundation for the gown. The hoop supported the volume of the petticoat, as the skirt was known in the 18th century.

A Miss Davis ordered this hoop, with a gown and petticoat, from a London robe maker. 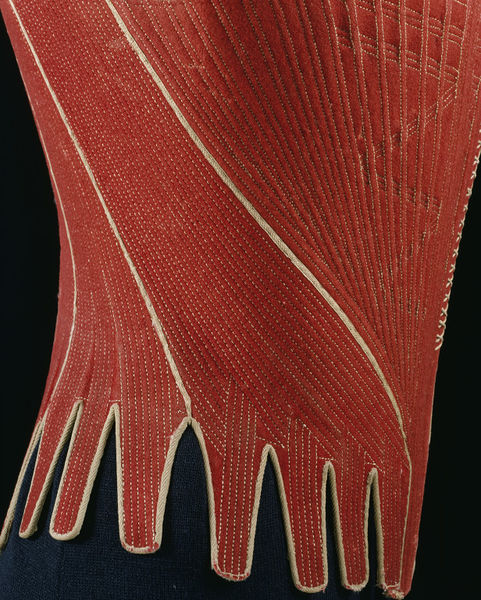