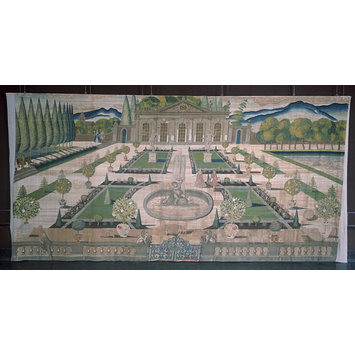 Object Type
This is the larger of a pair of embroidered wall hangings which came originally from Stoke Edith in Herefordshire. The embroideries depict formal garden scenes, laid out in late-17th-century Anglo-Dutch style. They would have been used like woven tapestries, to line the walls of a room with decorative, narrative scenes.

Places
Stoke Edith was built by Paul Foley, Speaker of the House of Commons, who demolished the old house on the site and started to build the new one in 1697. The house was completed by his son Thomas after his death in 1699. After a visit by the leading garden designer George London in 1692 the park and gardens were remodelled to his suggestion, and it is likely that pleasure grounds would have been laid out around the house in a series of formal compartments with geometric walks, flower-beds and fountains.

Subjects Depicted
The gardens depicted in the hangings may reflect the appearance of the real gardens at Stoke Edith in the early 18th century or may be composites of elements of fashionable garden design of the period, which included Chinese porcelain pots and extravagantly fashionable tulips. On the left side of the hanging are two gentlemen walking with a black servant. By the late 17th century many wealthy families had black servants, who were often included in portraits of the aristocracy as emblems of wealth.

Materials & Making
Family tradition described the hangings as the work of members of the household, but their huge scale and the consistent quality of the embroidery indicate that they must have been made in a professional workshop.

Embroidered wall hanging, worked mainly in tent stitch in silk and wool on a linen canvas ground. Some areas of applique with chain stitch (fruit trees in chinese pots). The design was drawn on the canvas prior to embroidery, and can be seen in some areas where the stitches have dropped out. From this evidence it appears that some small areas of the design (for example flowers) were not executed, or were worked differently from the original design. The canvas ground consists of four pieces of canvas running from side to side of the hanging: two complete loom widths of 93cms, one half width of 51 cms at the upper edge of the hanging, and one width of 81cms at the lower edge. The lower edge has been cut and it is possible that the embroidery was originally deeper. There may also be a section missing from the top of the embroidery. To the left of the centre there is an inverted L-shape cut which runs from the lower edge vertically for half the height and then horizontally to the right for a shorter distance, made for a door opening (visible in 1909 Country Life photograph) (darned across later).

The object forms a parallelogram, having been pulled into that shape by the tension produced by the embroidery.

The design is of a formal garden. It shows an orangery, a parterre, with two classical statues (Mercury and Bacchus) and a round basin with a fountain and statue of a putto riding on a dolphin, the corner of a larger pond (faced with flints, like a grotto ?), a wrought iron gate in the foreground, in the middle of a stone balustrade, with stone lions holding shields, one containing the arms of Knightly (Thomas Foley (d.1737) married Anne Knightly of Fawsley, Northants, c.1688), 14 lemon and orange trees in Chinese porcelain pots, decorated in blue and red on white ground, and urns, flower beds of brown earth with tulips and carnations in formal rows, standard clipped box trees in the centre of the beds, and yews at the corners, some with berries, two standard hollies with berries in urns on the balustrade, row of lilies in pots on the left, rows of miniature larch (?) trees, avenue of pine trees on the left, rick wall to either side of the orangery with espalier fruit trees, possibly grapes, peaches, figs and plums, archways through to the outside: on the left, a grove of trees behind a wall with church tower and flag, blue hills in the distance, and clouds, birds and animals: 2 swans, 2 peacocks, macaw, cockatoo, 3 spaniels, 1 chasing squirrel, and people: a couple by the fountain, a couple by the far left wall, and two men with a black page, far left edge.

Embroidered linen canvas with silk and wool, and appliqué

The three hangings known as the Stoke Edith Hangings were formerly at Stoke Edith House in Herefordshire. The house was built by Paul Foley, Speaker of the House of Commons, demolishing the old house on the site and starting to build the new one in 1697. The house was completed by his son Thomas after his death in 1699. After a visit by the leading garden designer George London in 1692 the park and gardens were remodelled to his suggestion, and it is likely that pleasure grounds would have been laid out around the house in a series of formal compartments with geometric walks, flower-beds and fountains.(Evidence for these in a survey of 1766 as a prelude to new alterations). The gardens depicted in the hangings may reflect the appearance of the real gardens in the early 18th century.

The house was destroyed by fire in 1927. Prior to this the hangings hung in the green velvet bedroom, between the dado and the ceiling.

This hanging came to the V&A for conservation in 1980 and was not returned as display conditions at Montacute were no longer suitable. Together with the other two hangings it was allocated to the V&A by the Dept of National Heritage on behalf of the Treasury Solicitor in November 1996.

British Galleries:
This embroidery hung in a bedroom at Stoke Edith, Herefordshire (seen here in a photograph of 1909). The formal garden shown here may represent the real garden at Stoke Edith or may be a composite image of fashionable garden designs of the period. Another embroidery (see photograph, right) showed a related garden scene. Family tradition described them as the work of members of the household, but their huge scale and the consistent quality of the embroidery indicate that they must have been made in a professional workshop. The building of Stoke Edith as a residence for Paul Foley (about 1645-1699), Speaker of the House of Commons, was started in 1697. [27/03/2003]
Text written about this object for 'Uncomfortable Truths / Traces of the Trade' gallery trails (Trail 2: 'Black servants in British Homes'), 20 February - 31 December 2007. Helen Mears & Janet Browne.

'EMBROIDERED HANGING FROM STOKE EDITH (DETAIL) / Stoke Edith in Herefordshire was rebuilt by Paul Foley, Speaker of the House of Commons, in 1697. In this embroidery, the ordered symmetry and harmonious design of the house and grounds present an idealised vision of wealthy and fahsionable life in the early 18th century. On the left can be seen a well-dressed black servant accompanying the two European figures. Black servants at this time were coveted status symbols, with the same 'exotic' associations that made Chinese porcelain and Indian chintzes so desirable.' [20/02/2007] 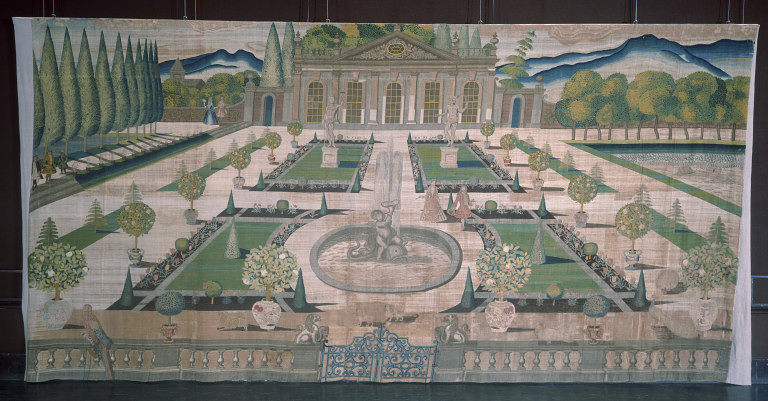