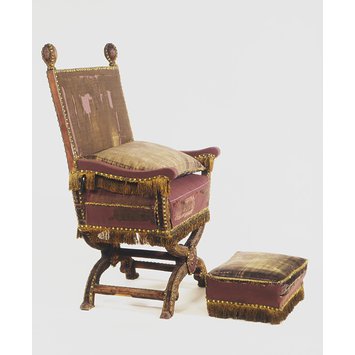 Object Type
This footstool would have been placed in front of a chair of state. Kings, bishops and other dignitaries are often portrayed seated on thrones and resting their feet on footstools, not only for comfort but also to enhance their dignity.

People
This stool was made in 1661 by John Casbert (active 1660-1676), the royal upholsterer, with the chair of state to be used by William Juxon, Archbishop of Canterbury (1582-1663), during the coronation of Charles II (ruled 1660-1685). Both these pieces of furniture remained in the possession of Juxon's descendants until 1794, when they were sold.

Historical Associations
Both this footstool and the chair of state that goes with it (museum no. W.12:1, 2-1928) have long been associated with the trial and execution of Charles I (reigned 1625-1649). A number of romantic stories have become attached to them. These include the fanciful claims, reported in The Gentleman's Magazine of June 1794, that Charles I knelt on the stool when he was beheaded and that there were still drops of blood on the upholstery. Recent research has proved that both chair and stool were made for the Coronation of his son, Charles II, on 23 April 1661.

Materials & Making
The stool has a beech frame, but its legs have been replaced. It is upholstered with purple velvet and greenish-blue satin, and decorated with a fringe of gold wire, silver-gilt wire and gold-coloured cotton, tacked on with iron nails with ornamental gilt heads. The stuffing is held in place by webbing, a series of criss-cross straps, of hemp.

Footstool, upholstered in purple velvet and gold fringe. Beech frame with turned legs, three of which were replaced in 1989.

This footstool and accompanying chair of State (W.12:1, 2-1928) were made by John Casbert for William Juxon (1582 - 1663), Archbishop of Canterbury, who officiated at the coronation of King Charles II, which took place in Westminster Abbey on 23rd April 1662. They were both later removed to Juxon's house at Little Compton, Gloucestershire, and passed down through his family until the death of his nephew's daughter-in-law, Viscountess Fane in 1791. They were subsequently bought by a Mr Sands, who by 1808 had bequeathed it to a cousin who married a surgeon from Birmingham, by the name of E.T.Cox. Their son, Dr. Sands Cox, in turn bequeathed them both to the Moreton-on-Marsh Cottage Hospital at a later but unknown date. In 1889 they were exhibited at the Royal House of Stuart exhibition at the New Gallery, Regent St., London, and in 1928 it was bought by the Victoria & Albert Museum for £500 (with a grant of £100 from the N.A.C.F.) Between January and July 1989 conservation was done to both the upholstery and woodwork of the chair and footstool in preparation for display in the British Primary Galleries. Three of the turned legs were replaced. It seems likely that the remaning leg is not original: illustrations of 1794 and 1808 indicate that the legs were rectangular. Research done in preparation for Western Furniture - 1350 to the Present Day (ed. C.D.Wilk) revealed that this chair, hitherto associated with the trial and execution of King Charles I, was in fact made by John Casbert, the leading upholsterer of his day, as the Archbishop of Canterbury's throne at the coronation of King Charles II.

Historical significance: John Casbert produced lavish seating furniture for King Charles II, the royal family and various members of his court from ca. 1660 until his death in 1677. He was without doubt the leading upholsterer in the years following the restoration of the Monrachy and what John Evelyn called "the politer way of living". Juxon's chair and footstool are vitally important from the point of view of both National and Furniture History: it served as the throne of the Archbishop of Canterbury who officiated at the coronation ceremony of King Charles II, thus finally establishing the return of Monarchy to the British Isles; and this is the only documented piece of Casbert's furniture, with the possible exception of two "X" frame chairs at Knole, to survive.

An Upholstered Armchair and Footstool

About the middle of the sixteenth century upholstered chairs were ﬁrst introduced from Italy into England, and in the Stuart period this type continued to he made in a more luxurious form for the Royal palaces and a few great houses. Recent research has shown that the craftsmen responsible for the most ornate examples were members of the Guild of Coffermakers, who also covered coffers and travelling trunks not only with leather but also with costly fabrics. As the framework was often of beechwood covered with silk or velvet, such chairs were very perishable and are now of great rarity.
This celebrated arm-chair is covered with faded velvet originally crimson, trimmed with gold fringes, and has a footstool similarly upholstered. According to a tradition which can be traced back to the eighteenth century, it was used by Charles I during his trial in Westminster Hall, when according to Nalson (Tyral of King Charles I, 1684), he sat in ‘a large elbow chair covered with crimson velvet, with gold fringe and nails, and velvet cushion’. This tradition cannot he substantiated, but undoubtedly the chair was once in the possession of Archbishop Juxon who, when Bishop of London, attended King Charles on the scaffold. After a brief imprisonment during the Commonwealth, Juxon retired to his manor house at Little Compton in Gloucestershire until the Restoration. At his death the chair passed to his nephew Sir William Juxon, and then to Sir William’s daughter-in-law who died in 1792. Subsequently this imposing example of State furniture was bequeathed to the hospital at Moreton-in-Marsh. It remained there until 1928, when it was purchased by the Museum with the assistance of a grant from the National Art—Collections Fund.
English; early seventeenth century.

British Galleries:
The upholsterer John Casbert, who supplied this chair and stool, worked in London between 1660 and 1676. He may have come from France. Casbert supplied chairs, beds and fabrics for the royal palaces and for royal occasions and was also responsible for the furnishings of the royal yachts. For this commission he worked with Ralph Silverson, a fringe maker. Casbert charged £4 for making the stool and the chair, whereas the gold and silver fringes cost £29. [27/03/2003]

Attribution note: This was the footstool made to go with the Chair of State for the Archbishop of Canterbury, when he officiated at the coronation of King Charles II on 23rd April 1661.
Reason For Production: Commission 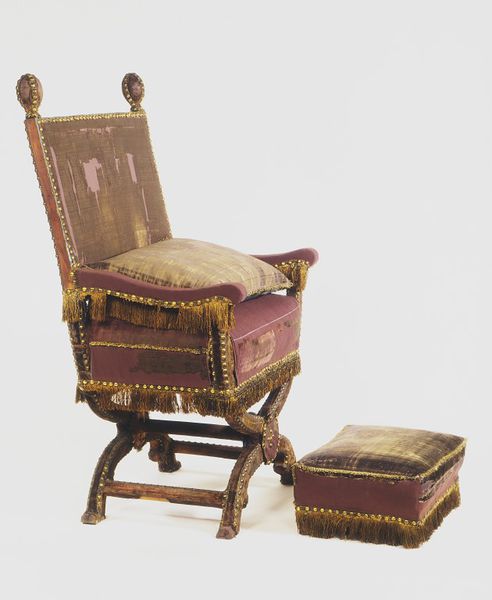