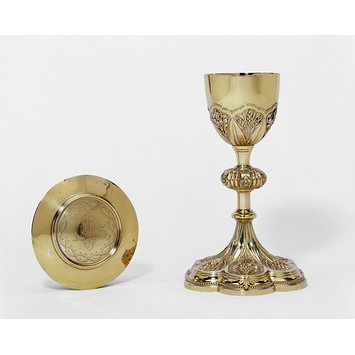 This chalice originally belonged to James Alipius Goold who became the first Catholic bishop (later archbishop) of Melbourne in 1847. He was an Irishman from County Cork who had studied for the priesthood at Augustinian monasteries in Perugia and Viterbo in Italy.

The foot and bowl of the chalice are decorated with grapes and sheaves of wheat. This decoration refers to the bread and wine used in the Last Supper which Christ ate with his disciples before his arrest. In the mass the bread and wine are believed by Roman Catholics to become the body and blood of Christ. The decoration therefore relates to the function and significance of the chalice.

The chalice has a hexafoil foot, stamp-cut with a beaded rim, the trefoliated lobes have wheat ears alternating with a single bunch of grapes and vine-leaves. The details are chased and the background matted. A roll moulding separates the foot from the tubular stem. The flattened spherical knop is divided into six segments with broad ribbing between them. Each segment has a Gothic quatrefoil on its most prominent surface and a field of engraved diapering above and below. The calyx of the tall bowl has stamped pierced work echoing the motifs of the foot. The bowl appears to be a replacement.

Paten:
Circular paten with a profiled moulding around the centre so that it can rest within the bowl of the chalice. The central area engraved with a crown of thorns, the letters IHS (Sacred Monogram) and the Sacred Heart pierced with three nails

Previously the property of James Goold, the first Catholic Archbishop of Melbourne, Australia.

Silver-gilt, made in Paris, second half of the nineteenth century.

Chalice and Paten
This paten would have been used during the Mass to serve the consecrated bread. Along with a chalice, it originally belonged to James Alipius Goold, who became the first Roman Catholic bishop of Melbourne in 1847 (and later archbishop). He was an Irishman from County Cork who had studied for the priesthood at Augustinian monasteries in Perugia and Viterbo in Italy.

The paten is decorated with a crown of thorns, referring to that worn by Jesus on the cross, the letters ‘IHS’ and a heart pierced by three nails. ‘IHS’ represents a contraction of the name Jesus Christ in Greek. Known as the ‘Sacred Monogram’, it has been used as a symbol for Christ since the 6th century. The heart pierced by nails is the Sacred Heart of Jesus, a symbol that became popular among Catholics in the 17th century. 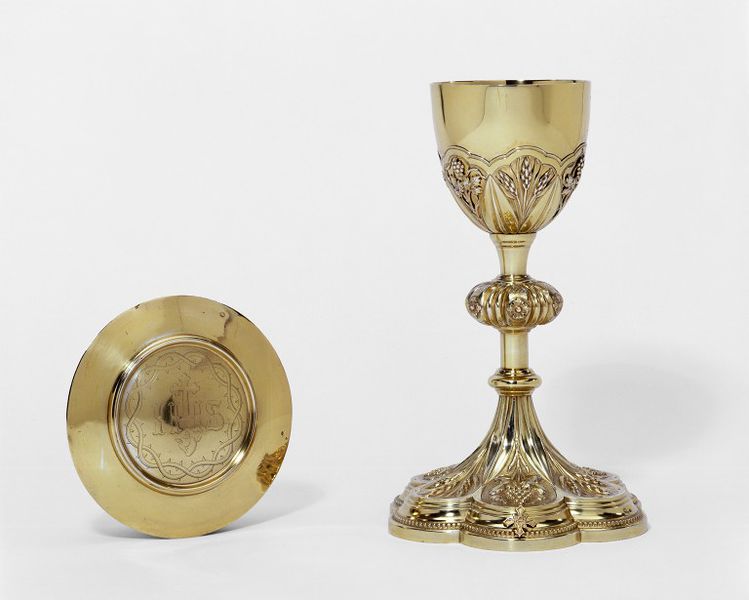