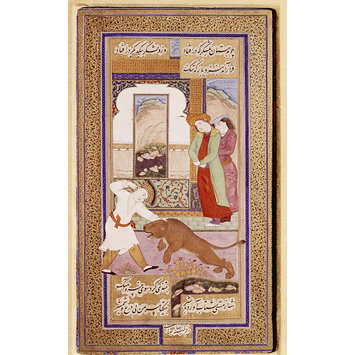 Leaf from the Romance of Khusraw and Shirin

This painting once illustrated a manuscript copy of Khusraw and Shirin, one of the most popular narrative poems in Persian literature. It tells of the long and complicated courtship of King Khusraw (loosely based on the 6th-century Iranian ruler Khusraw Parviz) and the Armenian princess, Shirin. The two are eventually united in marriage, only for Khusraw to be killed. The work was written in the 12th century by the poet Nizami, and this illustration was painted in Isfahan almost 500 years later, in 1632.

Khusraw is shown slaying a lion with his bare hands to protect Shirin, while two servants observe his feat. Since the attack occurred at night, Khusraw is in his nightclothes. The scene was executed by, or under the direction of, Riza Abbasi, the greatest Iranian painter of his day. His signature appears in smaller script at the base of the painting.

The page containing this painting was removed immediately before the manuscript of Khusraw and Shirin was sold to the V&A in 1885. The owner at the time was Sidney Churchill, the British consul in Tehran, and he had the folio mounted on a board and set within an illuminated frame by a local artist. The painting was brought to the V&A for an opinion in 1962 and was recognised by one of the curators, B.W. Robinson, as that missing from the V&A’s own manuscript.

The tragic romance of the king Khusraw Parvez and his beloved Shirin, centuries old, was crafted by the great twelfth-century poet Nizami into a profound exploration of human passion. Beginning in the fifteenth century it became popular in the Persian-speaking world to produce manuscripts of Nizami’s poetry which included miniature paintings to illustrate moments in the story. This painting, cut from its manuscript (364-1885) in the nineteenth century and fitted with an ornamental border, depicts Khusraw killing a marauding lion. Since the attack occurred at night, Khusraw is shown in his royal pyjamas. The painter, Riza ‘Abbasi, is one of the most famous artists in Islamic history.

Isfahan (made)
Iran (made)
Tehran (later illumination surrounding the original folio, made)

Ink, gold and pigment on paper and pasteboard

From notes in Central Inventory:

Entered in Library Inventory as: Abbrassi Rega, Persian Miniature Painting. Leaf from the Nizami's Khusraw u Shirin (364-1885). Purchased for £176.

The papers are on the VAL file ref 1962/19; Mr Robinson wrote:
"By an extraordinary coincidence I had brought in to me by a visitor the other day a miniature extracted from our finest Persian MS, the Nizami illustrated by Riza-i 'Abbasi (364-1885). This MS was among those obtained from Sidney J.A. Churchill, who has written a note on the flyleaf. What first aroused my interest was that the miniature brought in to me, which had been provided with a lavish illuminated border about 80 years ago, had a note on the back, also in Churchill's writing, stating not only that the painting was by Riza-i 'Abbasi (it is signed in the lower margin, so that was not difficult), but also that the text was in the calligraphy of 'Abd al-Jabbar (the copyist of our Nizami MS), which he could not have known without also knowing the MS from which it came. The style and proportions of the miniature correspond exactly with those in our Nizami, and I have no doubt that Churchill extracted it before parting with the MS to us, and had the border adorned with illumination by an artist in Tehran where he was living at the time. The miniature is in perect condition, apart from its later marginal adornments, and represents Khusraw killing a lion with his fist. I have checked through our MS and I find that a folio has indeed been removed between those now numbered 70 and 71, where this episode is described, as is clear both from the state of the opening between the leaves and from the fact that the catch-word at the bottom of fol.70b does not agree with the first word of fol.71a. The trouble is that the man who brought it in, a small antique dealer in Margate by the name of Hayter, is not the owner , but brought the miniature along to oblige a neighbour, an old Czech who runs a local junk-shop. I asked Mr Hayter if possible not to lose sight of the miniature; he told me that the owner was being very cagey about naming a price. If you agree, I will continue discreet negotiations and secure the miniature if I can. The sale room price would probably be in the neighbourhood of £100."

Subsequently a price of £175 is named byy Mrs Hayter as what Mr Horvath (the owner) would be prepared to sell for.

Mr Robinson sent a cheque for £176 to Mrs Hayter (an extra £1 "in recognition of her patient efforts on our behalf in this matter; as I mentioned in my original minute to you, the owner was very cagey and difficult requiring careful handling").

After discussion it was decided that the miniature should be kept in the Library with the MS rather than PDP.

Detached leaf with depiction of the hero Khusraw killing a lion, from the romance of Khusraw and Shirin, later re-mounted and decorated, Iran (Isfahan), 1632 and 1884-5 (later additions).

This painting is from the manuscript of "Khusraw and Shirin" to its right. It shows the hero, King Khusraw, killing a lion with his bare hands. The painting was removed by a previous owner in 1885 and mounted as an album page in an illuminated frame.

This folio was removed from a Safavid manuscript copy (dated 1632) of Nizami's Khusrawand Shirin, shortly before the manuscript came into the possession of the South Kensington Museum (today the V&A) in 1885. In 1302H (1884-5), the detached folio was mounted on a board and richly decorated with new illumination by Mirza Reza Taleqani, a Tehran-based artist based in Majma' al-Sanayi art school. Churchill sold the manuscript to the Museum in 1885, along with many other examples of Persian manuscripts, bookbinding tools and bookbindings, some of which are signed by Taleqani.
This mounted folio was brought to the Museum for an opinion in 1962 and was recognized by B.W. Robinson as that missing from the V&A's own manuscript (364-1885; now MSL/1885/364). See object history note. 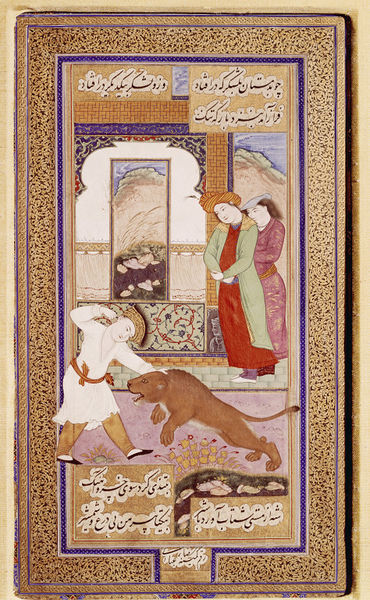