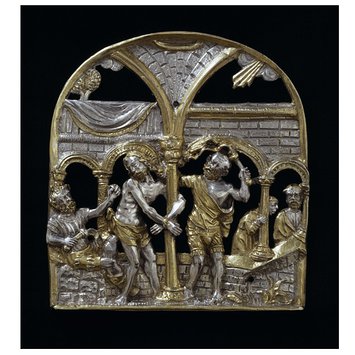 This plaque is part of a series showing scenes from the life of Christ. They would probably originally have been part of a large religious object such as a custodia. Custodias were particularly important in Spain at this period. They were often very large and designed not only to display communion wafers but to be paraded through the town during important processions such as the Corpus Christi celebrations. These plaques are thought to have been made by a goldsmith associated with Enrique de Arfe. De Arfe was one of the most successful Renaissance silversmiths in Spain. He trained in Cologne in Germany but spent much of his career on commissions for Spanish cathedrals.

In this plaque, Christ is lashed to a pillar whilst Pontius Pilate's soldiers scourge him.

Silver plaque, square bottom with slightly protruding base and rounded top. Chased and pierced with a scene of the Flagellation of Christ.

Acquired by Dr Hildburgh from the Ole Olsen Collection, Copenhagen. A group of 23 plaques were mounted on an ebonised modern casket from which they were removed when acquired by the museum. Comparison with works in other collections suggests that they were made by a Spanish artist working under German influence, possibly Enrique de Arfe.

Plaques Showing the Life Of Christ

Each plaque shows a scene from the life and suffering of Christ. As well as telling the Christian story, these episodes were meant to inspire feelings of pity, gratitude and humility in the devout. The series is not complete and it is likely that the plaques came from a large object, now lost.

In the style of Enrique de Arfe 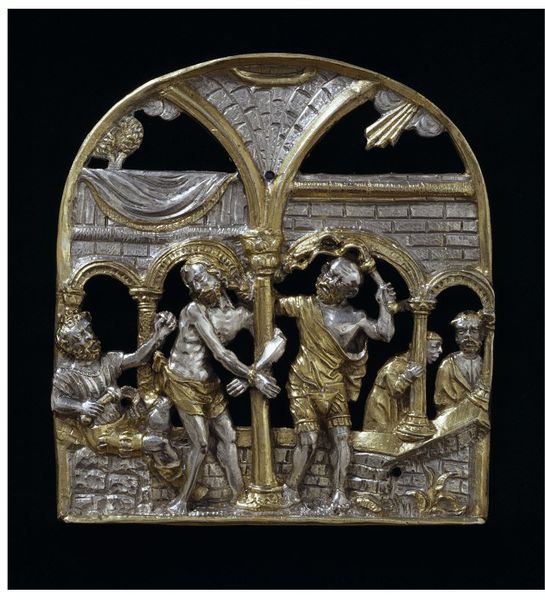