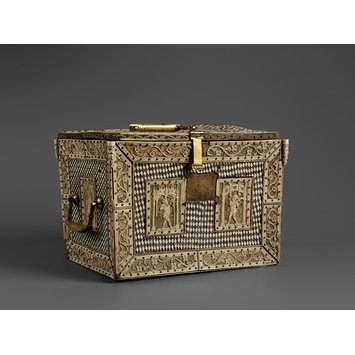 This is a casket of bone, ivory, horn and silk, on a wooden carcase, made in the Upper Rhine or Eastern France, perhaps Alsace, in about 1420-1450.
The unique and problematic box is difficult to place. The combination of both high and low quality elements (the lozenge-shaped intarsia work is particularly poor), the mixture of secular and religious imagery, the unusual techniques, and strange elements such as the ivory corbels combine to give the initial impression of an object of dubious authenticity. In its favour, on the other hand, is the likelihood that the forger would not have created such an unusual and original work.

Wooden casket overlaid with bone 'alla certosina' with ebony marquetry and gilded metal fittings. Each face of the casket is covered with chequered patterns of bone and horn, and borders of carved strips of pierced bone, held in place by brass nails, with coloured strips of silk beneath. The silk fabrics alternate in colour, between green and a lighter colour, which is either a faded red or yellow. Each long side has two figurative plaques, while the short sides have one. The front of the casket depicts two wild men under elaborate canopies, that on the left shooting an arrow skywards, the other holding a club.
Reading from left to right around the casket, the remaining figurative plaques depict St Catherine, a bearded figure holding a triangular object (tentatively identified by Longhurst as St Philip the Apostle), St Barbara and St Peter. Each of the figures has black dots of applied pigment to indicate their eyes. The borders of each face of the casket have applied plaques representing foliage and flowers. At each of the upper corners is an applied ivory corbel representing the head of a green man. The lid has two decorative plaques of flamboyant tracery designs. The hinges and handles are of copper-gilt. The lock plate has been removed, and the clasp that fitted into it has snapped off. The underside is decorated with plain bone panels and a thick resinous coating. The interior is lined with green velvet, much worn.

Wood inlaid with ivory, bone, horn and ebony marquetry with gilt-copper fittings and carved with figures

Purchased from John Webb, London in 1862 (for £100); according to William Maskell it was 'said to have been found hidden in a recess of a wall, a few years ago, on the final demolition of a ruined chateau in France' (Maskell 1872, p. 34). 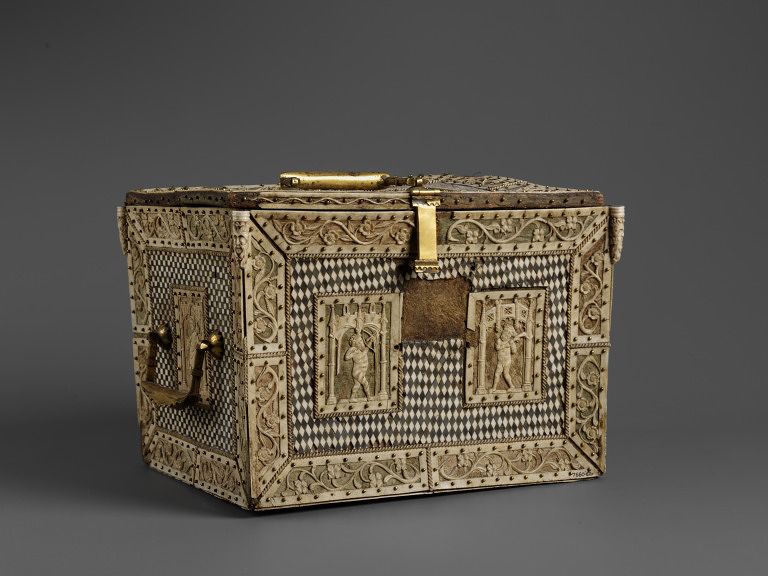