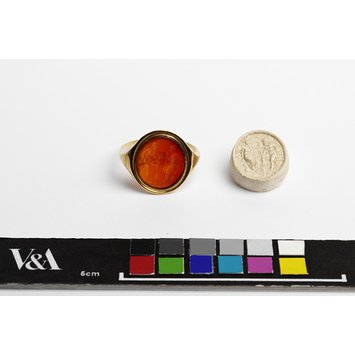 Neptune offering a flower to Amymone

The art of engraving gemstones can be traced back to ancient Greece in the 8th century BC and earlier. Techniques passed down to the Egyptians and then to the Romans. There were major revivals of interest in engraved gems in Europe during the Byantine era, the Middle Ages, the Renaissance, and again in the 18th and 19th centuries. At each stage cameos and intaglios, these skillful carvings on a minute scale, were much prized and collected, sometimes as symbols of power mounted in jewelled settings, sometimes as small objects for private devotion or enjoyment. The subject of this intaglio, engraved in the early years of the Roman empire, has been identified as Neptune with one of his consorts, Amymone. In Greek mythology Neptune rescued the princess Amymone, one of the Danaid or daughters of King Danaus, from rape by a satyr. Neptune then fathered a son, Nauplius with her, and his descendants founded the port of Argos from which the Greeks sailed for the Trojan war.

Almost circular intaglio. Translucent orange-red carnelian. Depicting Neptune standing at right. He is naked and bearded, the folds of a cloak visible over his right arm. His left foot rests on a rock, and with his left hand he offers what may be a flower to a female figure at left. She wears a high-waisted full-length tunic, and is seated on a rock. In gold ring.

Formerly in the collection of Bram Hertz and acquired by the Liverpool collector Joseph Mayer. This intaglio was sold at Sotheby's in 1859 in the sale by Mayer of what had been the Bram Hertz collection, and acquired by Chaffers for Matthew Uzielli (1805-60). It was subsequently bought by the Museum, together with five other engraved gems, at or following the Matthew Uzielli Sale, Christie's London, April 12-20 1861, lot 904. Matthew Uzielli was a wealthy banker, railway magnate and a celebrated collector of paintings and decorative art, for whom John Charles Robinson (the first curator of the South Kensington Museum) sometimes bought objects. Together with the Prince Consort he was the major guarantor of the 1862 International Exhibtion.

Inventory of Art Objects Acquired in the Year 1861 In: Inventory of the Objects in the Art Division of the Museum at South Kensington, Arranged According to the Dates of their Acquisition. Vol I. London: Printed by George E. Eyre and William Spottiswoode for H.M.S.O., 1868, p. 16
Machell Cox, E., Victoria & Albert Museum Catalogue of Engraved Gems. London, Typescript, 1935, Part 1, p. 59.
Sale catalogue Various works of art forming the collection of the late Matthew Uzielli, Christie's London, April 12-20, 1861, lot 904.
Catalogue of the Hertz Collection, 1851, no. 200.
Catalogue of the celebrated and well-known collection of Assyrian, Babylonian, Egyptian, Greek, Etruscan, Roman, Indian, Peruvian, Mexican and Chinese antiquities, formed by B. Hertz... now the property of Joseph Mayer.., Sotheby's, February 1859, lot 293.
Robinson, J.C., Catalogue of the Various Works of Art forming the Collection of Matthew Uzielli, Esq. of Hanover House, Regent's Park, London, London, 1860, No. 511a, pl. 4. 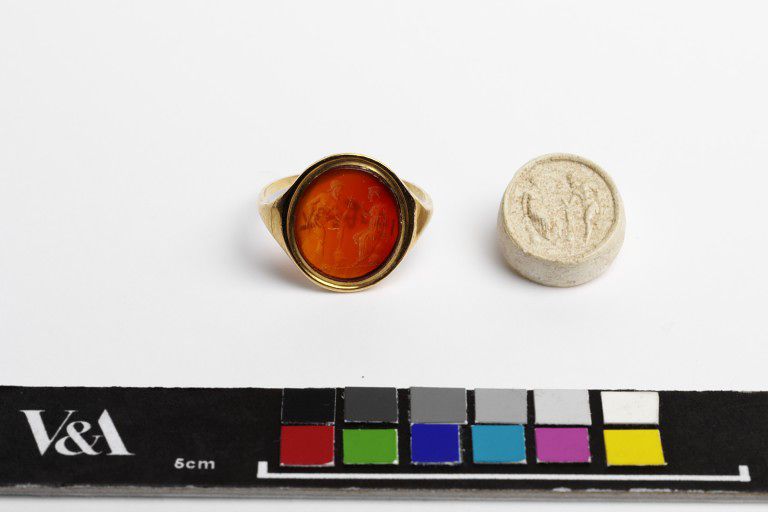