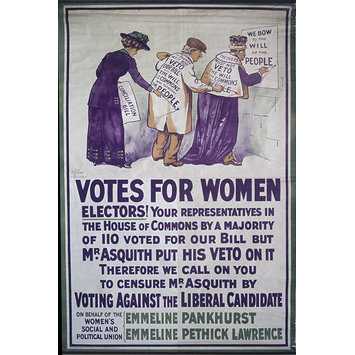 This Suffragette poster was created in response to the Liberal Prime Minister Herbert Asquith's suppression of the 1910 Conciliation Bill, which proposed extending the vote in Britain and Ireland to around one million wealthy, property-owning women. The design shows King George V painting the text 'We Bow to the Will of the People' onto a poster, a man wearing brown overalls and a flat-cap is painting onto the King's back, whilst a suffragette paints onto the man's back. The poster attempts to show how Asquith had gone against the will of Parliament and theirfore the people of the United Kingdom. It calls on male voters to register their protest by voting against Liberal candidates in the next election.

The Suffragettes were particularly adept at using posters to get their message across. This poster was published by the Woman's Press, who oversaw the publishing and propaganda for the Suffragettes. It was designed by Alfred Pearse, under the pseudonym 'A. Patriot', Pearse was a dedicated supporter of the campaign and designed many posters and cartoons for the Suffragettes.

Political colour lithograph poster issued on behalf of the suffragette movement of Emmeline Pankhurst and her supporters. The design shows King George V painting text onto a poster stuck to a brick wall. A man wearing brown overalls and a flat-cap is painting another text onto the King's back, whilst a suffragette paints further text onto the man's back. Below the image are ines of text calling for voters to censure Asquith 'by voting against the liberal candidate on behalf of the Women's Social and Political Union'.

'A. Patriot / "With Apologies to Ripolin Ltd."'
Signed

'VOTES FOR WOMEN / ELECTORS! YOUR REPRESENTATIVES IN / THE HOUSE OF COMMONS BY A MAJORITY / OF 110 VOTED FOR OUR BILL BUT / MR. ASQUITH PUT HIS VETO ON IT / THEREFORE WE CALL ON YOU / TO CENSURE MR. ASQUITH BY / VOTING AGAINST THE LIBERAL CANDIDATE / ON BEHALF OF THE WOMEN'S SOCIAL AND POLITICAL UNION / EMMELINE PANKHURST / EMMELINE PETHICK LAWRENCE'
Text below image.

'THE PEERS / MUST NOT / VETO / THE WILL / OF THE COMMONS / WHO REPRESENT THE / PEOPLE'
The text being written by a man onto the King's back.

'THE PREMIER / MUST NOT / VETO / OUR BILL / WHICH IS / THE WILL / OF THE COMMONS / WHO REPRESENT / THE PEOPLE.'
The text being written by a suffragette onto the man's back.

This is a political poster issued on behalf of the suffragette movement of Emmeline Pankhurst and her supporters, denouncing the liberals in the general election of December 1910. Published by The Women's Press,4, Clements Inn, London W.C. Printed by Spottiswode, Dixon & Hunting Ltd, 180 Fleet Street, London E.C.

'Votes for Women'. Political colour lithograph poster designed by Alfred Pearse ('A. Patriot') and issued on behalf of the suffragette movement of Emmeline Pankhurst and her supporters. Published by The Women's Press, London, 1910.

'A. Patriot' was the pseudonym of Alfred Pearse. 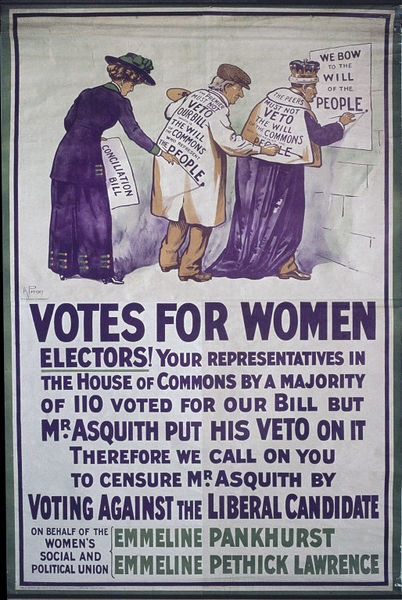