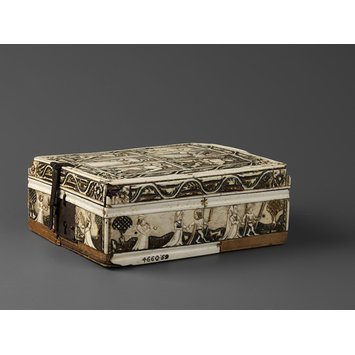 This casket made by an unknown artist in the South Netherlands in about 1440-1470. It is decorated with plaques with dancers and minstrels.
This casket is one of a large number of surviving caskets that share similar facture and a limited number of themes.
In the past, the group has been attributed widely to Italy, France, Germany and the Netherlands, although the last is preferred by most recent authorities. Paula Nutall meticulously explored the iconography of this casket, and concluded that the images refer to love, sex, and fertility, strongly suggesting that caskets of this sort played a role in formalized marriage negotiations. In addition, she challenged the practicality of such caskets' undersides being used as a games board, proposing that the reference to chess is, if anything, symbolic (Nutall 2010, pp. 133-41).

6747-1860 is an almost exact copy. Examples of these caskets are in most collections. Koechlin argued that these caskets were produced under Italian influence in the court circle of Charles VI.

The casket has a wooden carcase, onto which are glued multiple plaques of carved bone. The lid is framed by a border of rose stems with flowers at each corner;

The plaques are decorated with energetic dancers and minstrels, with three male figures in exaggerated poses, a musician playing the pipe and tabor, a fool and a female figure. These figures are all characteristic of the moresca, a popular dance in both courtly and more rustic settings.
The sides of the box are made up of two plaques per side, each bordered above and below by bone framing elements. The front face depcits (on either side of the lock plate) a man offering a rose to a lady. The nexzt face depcits a basse dance, in which two couples move through a landscape ot the accompaniment of a pipe player. The male figures hold torches. The back face seems to parody the love scene on the front, showing a fool and a lady releasing birds.
The final side depicts two fully armoured knights jousting in a landscape. The backgrounds are hatched and show remains of colour. On the bottom is a chequer board of bone and black wooden panels. With metal lock and catch and loops on three sides.

Wood overlaid with carved and tinted bone, pigment and gilding

Casket decorated with plaques with dancers and minstrels, on the side two knights tilting, and on the others processions of figures in a landscape. The backgrounds are hatched and show remains of colour

Purchased in 1859 (£8); according to Longhurst the casket was acquired in Brussels, and although there is no reason to doubt this, it is not confirmed in the incomplete Museum records.

6747-1860 is an almost exact copy. Examples of these caskets are in most collections. Koechlin argued that these caskets were produced under Italian influence in the court circle of Charles VI. 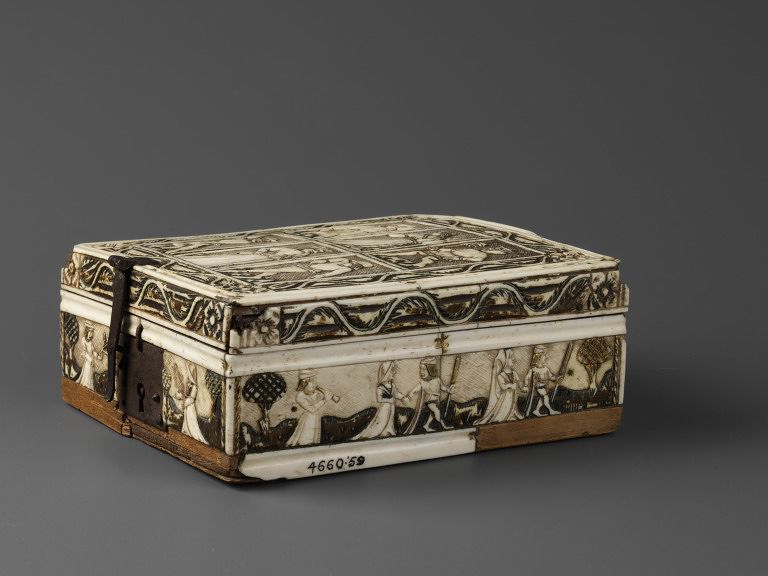