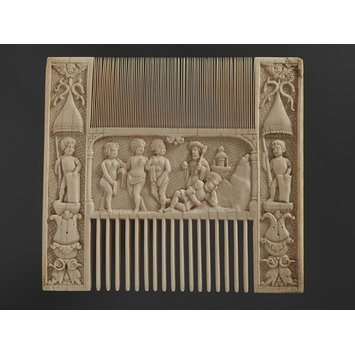 The Judgement of Paris and David's message to Bathsheba

This ivory comb is made by an unnknown artist probably in France or the Netherlands in about 1520-1530. It depicts on one side scenes of the Judgement of Paris (or more precisely, the Dream of Paris) and on the other David's message to Bathsheba.
A very similar comb with the same subjects is in the Louvre (Molinier, Catalogue, No. 157; Koechlin, III, Pl. CXCIV).
The particular narrative of the Judgement of Paris seen here is derived from the medieval romance the Historia Destructionis Troiae by Guido delle Colonne, written in Latin in 1287 and widely disseminated in printed form the late fifteenth century onwards.

In the period between 1300 and 1325 workshops in Paris enjoyed a thriving market for secular ivory carvings. They produced mirror-cases, combs and gravoirs (hair parters), often selling them as sets in leather dressing cases. Subjects from romance literature appeared frequently, as did the allegorical Siege of the Castle of Love.
The comb has since the Antiquity been a fundamental tool for personal grooming, used both by men and women. In the Gothic period ivory was often employed for the production of deluxe decorated combs. The Gothic comb is always carved on both faces and consists of two registers of teeth, one fine the other broader, above and below the narrative strips.
Ivory combs, together with mirror cases and gravoirs for parting the hair, formed an essential part of the trousse de toilette or étui (dressing case) of the typical wealthy lady or gentleman in the Gothic period. Considering the original ubiquity of such combs and in comparison with ivory mirror cases, a surprisingly small number survive from the fourteenth century.

Rectangular carved ivory comb, depicting on one side the Judgement of Paris (or more precisely, the Dream of Paris) and on the other, David's message to Bathsheba. At either end is a panel with boys holding shields and conventionalised foliage on a hatched background.
In the Dream of Paris Mercury is standing above the sleeping and armoured Paris, who rests on a rocky hillock with a fountain behind. Mercury holds the apple of discord in his right hand and a sceptre in his left, and looks towards the semi-naked standing figures of Minerva, Juno and Venus. At the sides are two putti with shields and lances, standing on foliate pedestals below tent-like canopies with winged cherub heads above. On the other face is the scene of King David sending his message to Bathsheba, shown here with an accompanying handmaiden who holds her clothes. At the sides are two vases with tall stylized foliate shoots. The background of both faces are cross-hatched, and the scenes take place within a broad niche with foliate half-spandrels and a trilobe boss at the centre of the arch.

France (probably France or Netherlands , made)

A very similar comb with the same subjects is in the Louvre (Molinier, Catalogue, No. 157; Koechlin, III, Pl. CXCIV) 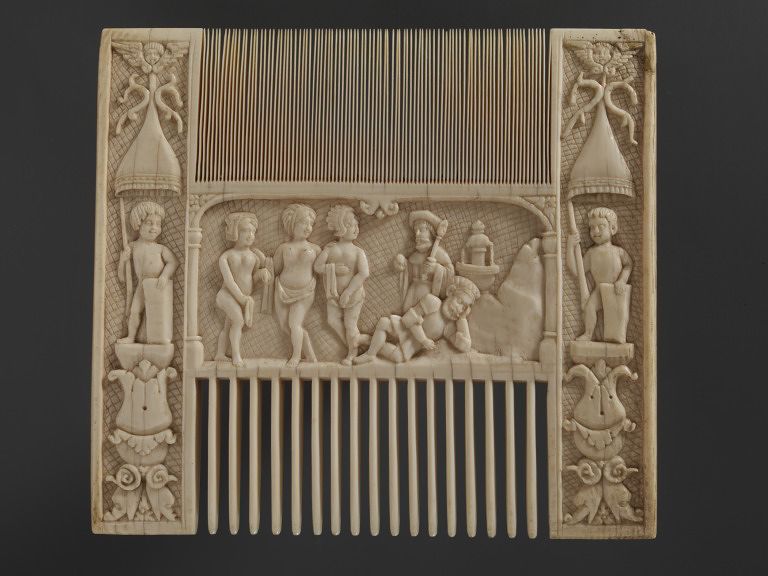