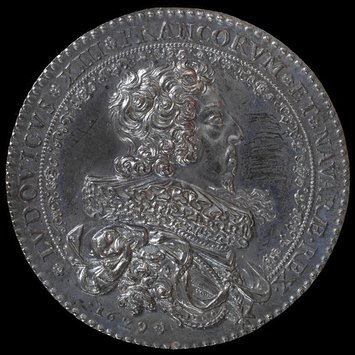 This medal was struck to celebrate the success of Louis XIII (1601-43), King of France, in forcing the passage of the Pas de Suze (the Suze Pass, which went through a gorge and is seen in the foreground of the reverse of the medal) in January 1629. This happened against the will of the Duke of Savoy, after his capture at La Rochelle (seen in the background) in October 1628.

On the obverse is a portrait of Louis XIII wearing a ruff, armour and the sash and cross of the Order of the Holy Spirit. On the reverse, Hercules (the Roman name for the Greek divine hero Heracles) stands astride a mountain. He represents the King, whose features he has been given here. He wears the skin of the Nemean lion which, according to Greek mythology, he killed as one of the twelve ‘Labours’ or challenges he was set, and he carries a club. Soldiers and fortresses are visible on the mountain as is a town in the distance over the sea, under attack by a fleet.

This medal is by Jean Warin (1606-1672), a French sculptor and painter as well as a medallist. He was born in Liège where his father worked for the mint of its ruler, the Prince Bishop. In 1626 Warin travelled to Paris where his uncle, Guillaume, worked as a wax modeller and his cousin, also called Jean, was a goldsmith. On 12 February 1629 Warin was put in charge of the Monnaie du Moulin, one of the two Mints in Paris, where technology developed in Germany was being used to mechanise the production of coins (rather than having them hammer-struck as was traditional practice). Warin revolutionised the production of coins with a mastery of the machinery available.

Warin was highly influential in the history of the medal. His medals show a clarity of composition based on studies of the Antique, as well as great finesse in their execution. He revolutionised not only the production of medals, but also their function in propagating image and iconography in the service of the state. This is seen here in this celebration of the King (as Hercules) triumphing over his enemies, but is most clearly seen in his most famous production: a series of medals commemorating the triumphs of Louis XIV’s reign; an entire medallic history conceived by the King’s Controller-General of Finances, Jean-Baptiste Colbert, in 1662.

Medal depicts on the obverse the bust to right of Louis XIII, in armour, wearing a scarf and a large ruff. Inscription.
On the reverse Louis as Hercules, standing naked with a lion's skin over his left arm, and a raised club. Behind a hilly landscape, with fortresses and troops marching. to the left the siege of a seaport. Inscription.

From the Salting bequest.

This medal was made to commemorate the Passage of the Pas de Suze.

Medal, silver, of Louis XIII and to celebrate the Passage of the Pas de Suze, by Jean Warin, France, 1629

Medal celebrating the Passage of the Pas de Suze; one of several made by Warin in either silver (eg British Museum, Hermitage, Fitzwilliam Museum) or bronze (eg Lyon, Brussels, Leiden, Copenhagen). 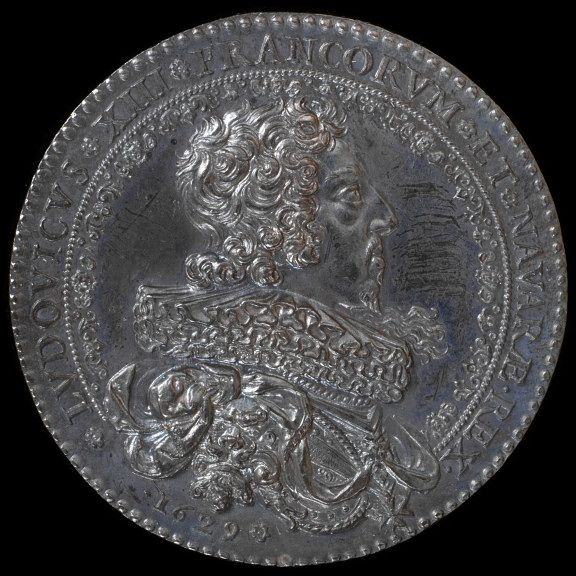