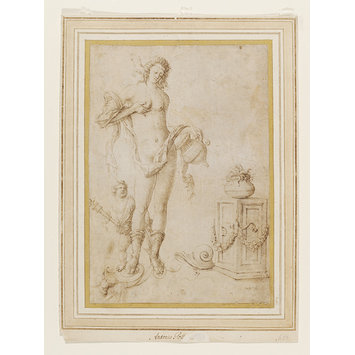 Venus and Cupid trampling on a Serpent

Venus and Cupid trampling on a Serpent; Venus, standing, wearing only a piece of drapery over her arms. she holds a vase in her left hand and presses one of her breasts with the other. Cupid stands behind with his torch; Pen and ink on vellum.

pen and ink on vellum

This object was previously attributed to Antonio Del Pollajuolo.

The name Antonio Pollaiuolo is written against the number m.1. in the Resta MS in the British Museum (described in Popham, Resta ; Lugt5 2981; and Lugt, Supplement , p. 419). Byam Shaw places the drawing in a group of drawings that he ascribes to Parentina, and Wazninski endoreses the attribution. The latter compares the Venus and the Cupid with the figures in a scene showing a sacrifice in Parentino with certainty. The name is, nevertheless, a convenient one to cover a fairly homogenous group of Paduan origin, dating from the end of the 15th century or the beginning of the 16th.

The drawing is similar to no. 12 above in handling, composition and mood, as well as in the artist's predilection for slender, androgynous women with long legs, narrow hips and small high breasts. The drawings might even be by the same hand. But some of the similarities are generic rather than particular, and if we compare the left hand of each goddess, which is in exactly the same position in each drawing, holding a vase, the differences in handling suggest two different artists. The use of the left hand to hold the vase may mean that both drawings were designs for engravings.

The catalogue and exhibition label text is as follows:

Ink on vellum was well adapted to express, through hatching, the clarity of quattrcento painting. Very similar hatching was used in contemporary Italian engravings, and it has been suggested that this drawing is preparatory to such a print. The mount with its wash lines is Padre Resta's (1635-1714).
(PWJ I 14)' [28/01/1981] 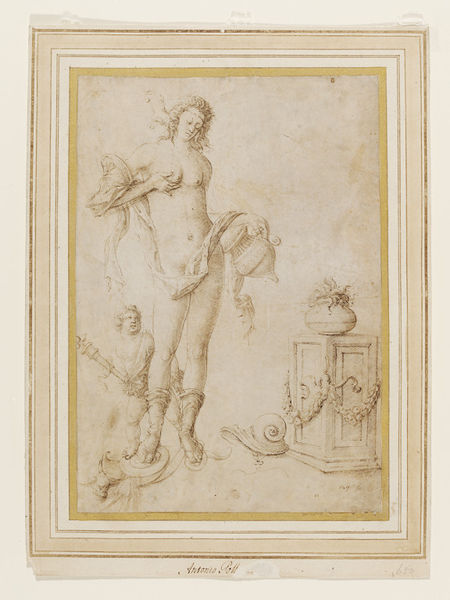