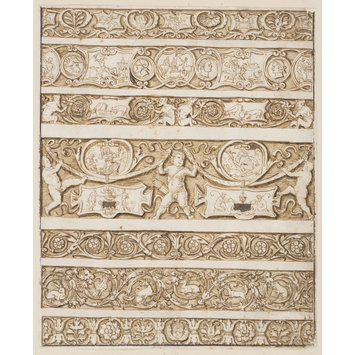 Designs (7 in 1 sheet) for ornamental friezes

Pen and ink, the background darkened with brown wash, on paper

Originally numbered '23', which has been altered in a blacker ink into '33'

Provenance: Transferred from the Art Museum 1863

This and the following five items (nos. 205-09), all by the same hand and evidently part of a set, were ascribed to Pirro Ligorio at the time when they entered the Museum. Gallichon (op. cit., p. 148) appears to have been the first to assign them to Nicoletto da Modena, largely on account of their resemblance to four drawings attributed to the artist in his own possession and to five others in the De Nolivos Collection, one of which is inscribed with the initials N.M. The drawing so inscribed and two from his own collection are illustrated in Gallichon's article. According to Hind (Early Italian Engravings, p. 107) three of the Gallichon drawings are now at Berlin, but the present whereabouts of the fourth and of the five De Nolivos drawings is not known. Two drawings in the Malcom Collection in the British Museum (Robinson, nos. 339 and 340; Popham and Pouncey, nos. 181 and 182 and pl. 164) also belong to the same series, being obviously by the same hand, of nearly the same size and bearing similar corrected folio numbers. Robinson and Hind mention two other drawings from the same set in the Louvre (His de la Salle Collection) and in the Musée Condé at Chantilly; and there are four drawings of the same type at Bayonne (see Bean, loc. cit.). All these drawings were presumably once united in a pattern book and may have been intended for publication as engravings.

The attribution to Nicoletto cannot be accepted as certain. Gallichon, who first proposed it, seemed to regard it as axiomatic and gave no reason for it, beyond stating the one of the drawings was inscribed NM. His attribution presumably rests largely on a comparison between the drawings and Nicoletto's prints, though he does not say so. But most of the 120 plates engraved by Nicoletto are of figurative rather than ornamental subjects and and are not in any way like the drawings. the 14 designs for grotesque ornament that he engraved bear some resemblance to our drawings, but it is a generic resemblance shared by all grotesque designs of this type made at that period. The only two engravings that are like our drawings in handling as well as subject are those discussed in Hind's British Museum catalogue nos. 58 and 59 and Early Italian Engravings nos. 116 and 117. But since Hind attributes these two engravings to Nicoletto because they are like the drawings, we cannot logically attribute the drawings to Nicoletto because they are like two engravings.

It is difficult to draw any clear conclusion from the various initials and monograms inscribed on the drawings. Gallichon stated that the initials ZFP (or ZPF) on nos. 205 and 206 were those of a collector whose mark was known to him, and he pointed out that the letters were written with a finer pen than the artist had used in the drawing. He might have added that a blacker ink was also used. In fact the fine pen and the black ink suggest that these initials were added by the same hand which correlated the numbers and made certain other alterations (in no. 206, for example, where FP has been changed to ER). It may have been by the artist himself at a later date, or an engraver, or an editor, or a collector. Popham and Pouncey suggests, as a possibility, that ZFP may stand for Zohanne Francesco da Parma, the form that Giovanfrancesco de' Maineri's name takes in contemporary documents; in justification they point out that Maineri and Nicoletto resemble each other closely in style. It seems to have escaped notice that no. 204, like the De Nolivos drawing illustrated by Gallichon, is inscribed with the initials NM, which seems to strengthen Nicoletto's claim, particularly as this is one of the few inscriptions on these six drawings which have not been added later. But even inscription FP (afterwards altered to ER) on no. 206 is also original and presumably equally valid. It is possible that some, and perhaps all, of these inscriptions have no more significance than the letters ABCD inscribed on a tablet in no. 208.] 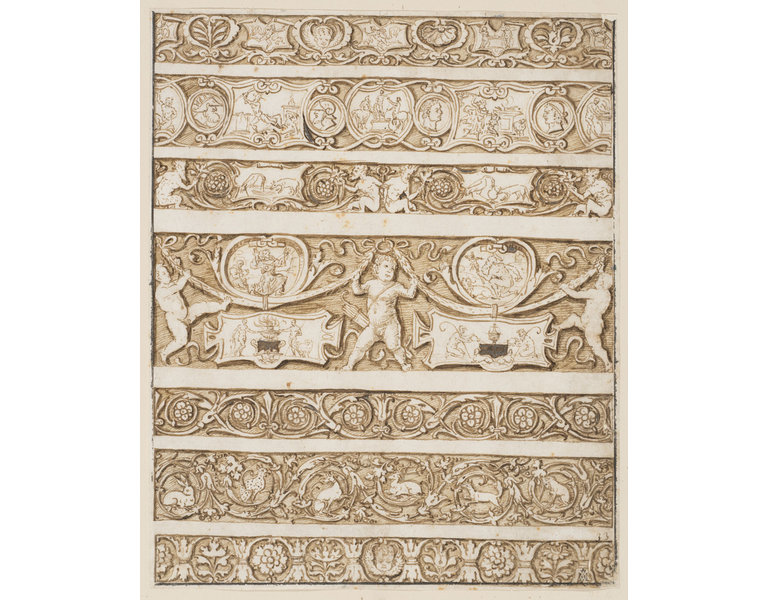