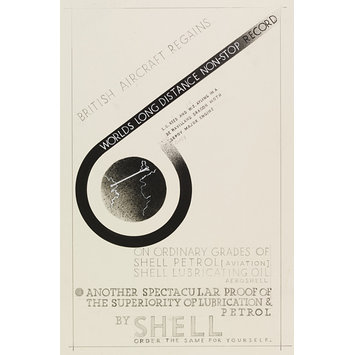 This design shows the typography for the words 'British aircraft regains worlds long distance non-stop record. L.G. Reid and J.R.Ayling in a De Havilland Dragon Moth Gipsy Major Engine'. It was one of the designs for the advertising campaign of Shell Mex and British Petroleum (B.P.) Ltd. for AeroShell by Edward McKnight Kauffer in 1932-34. Kauffer used a contemporary event in the design to advertise Shell's lubricating oil. What took place regained a world record: two Canadians James Ayling and Leonard Reid attempted to beat the the long distance flying record of 5667 miles. Their destination, Baghdad, was 6300 miles away. They took off in August 1934. The flight had to be foreshortened at London, England, nevertheless they regained the record in the British aircraft.

Design on card featuring a black outline shaped like a chemistry test-tube with a bulb at its end from which protrudes a diagonal tiube. Within the bulb is a black globe with a straight line connecting England with America. There is typography along the test-tube shape and beneath the design. There was originally a tracing paper overthrow that has become detached.

Pencil and bodycolour on card with a tracing -paper overthrow.

Although V&A's existing holdings of Kauffer's work include designs and posters, they are almost exclusively finished presentation drawings. This design along with other designs for Shell Mex and B.P. Ltd. show much more vividly the working out of ideas and the thinking that underpins the design process itself and therefore allow V&A to demonstrate effectively and completely the design practice of this important and influential designer. 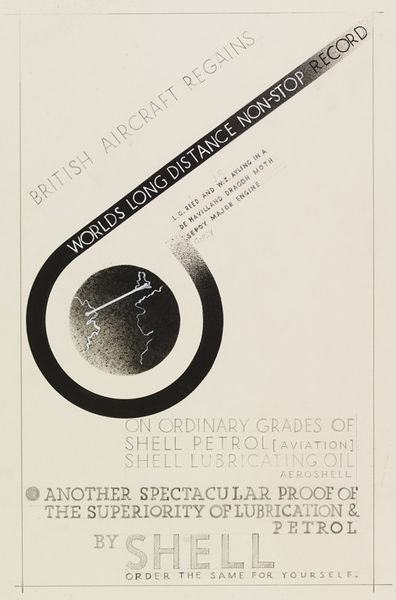