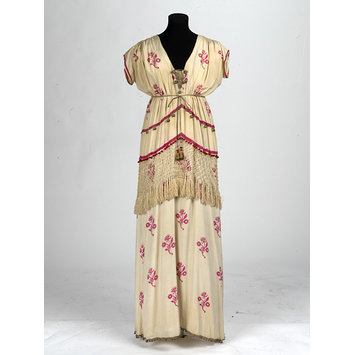 Costume for Helena in A Midsummer Night's Dream, 1914

Harley Granville Barker (1877-1946) was an established director and promoter of contemporary drama when he directed three of Shakespeare's plays at the Savoy Theatre. His productions of The Winter's Tale, Twelfth Night (both 1912) and A Midsummer Night's Dream (1914) have passed into theatre history. At a time when West End audiences were accustomed to the pictorial Shakespeare staged by actor-manager Herbert Beerbohm Tree, Barker's approach came as something of a shock. He did away with painted 'realistic' scenery and elaborately reconstructed historical costume. Instead he and his set designer, Norman Wilkinson (1882-1934), indicated location by using simple stylised scenery and painted curtains, and the costumes, by Wilkinson or Albert Rothenstein, suggested period dress but did not attempt to imitate it.

Barker's production of A Midsummer Night's Dream became famous for its presentation of the fairies as otherworldly beings with gilded faces. The play's mortal characters wore costumes loosely based on Grecian dress. Norman Wilkinson designed two outfits for Helena, who was played by Barker's then wife, Lillah McCarthy. For her first scene, and later in the wood near Athens, she appeared in a simple dress of white crêpe-de-chine with a stencilled border, worn with a cloak: there were two cloaks, one in grey crêpe-de-chine, the other of an unspecified green fabric lined with white. The costume shown here is her second dress, also of white crêpe-de-chine, worn for the wedding celebrations in the final scene. Its cut and shape are based on classical sources but Wilkinson used pink stencilled flowers to create a look that was modern and English. The outfit was completed with mauve shoes and a necklace of red beads, and Helena's long blonde tresses were decorated with a wreath of flowers. The Savoy Theatre account book, also in the V&A Theatre Collections, gives the total price of both costumes and the accessories as £23 6s 9½d.

Two part costume consisting of a dress and a over-tunic, both of white crêpe-de-chine and both decorated with a repeat stencilled pattern of flower sprigs in pink. The tunic is gathered across the shoulders to form cap sleeves, the sleeves edged with a painted pink stripe, and has a wide V neck with a small infill of silver lamé, to either side of which are ball buttons covered in a similar lamé. The tunic hem, at hip level, is cut as an inverted V at the front, the point to centre, and is edged with a painted pink stripe, a line of red beads and a wide border of knotted fringe. The tunic is decorated with a second stripe of similar shape trimmed with hanging beads, covered in silver lamé and is gathered under the bust with a silver lamé cord trimmed with lamé-covered tassels and red beads. The hems of the dress and tunic are weighted with a line of small metal beads. No label.

This costume was worn by Lillah McCarthy as Helena in William Shakespeare's play A Midsummer Night's Dream at the Savoy Theatre, London, 1914. The production was directed by Harley Granville Barker, with music by Cecil Sharp. Scenery and costumes were designed by Norman Wilkinson. The programme names the costume makers as Dorothy Carlton Smyth, Mrs Owen and Mr Savage. The painted decoration on the costumes was by R & G Manning Pike. The wigs were made by Clarkson and the shoes by Gamba.

Given to the British Theatre Museum Association by Mrs R.B. Hetherington, through the Borough of Worthing Museum and Art Gallery, in October 1966.

This costume was designed by Norman Wilkinson for a famous production of Shakespeare’s A Midsummer Night’s Dream by Harley Granville Barker in 1914. It was worn by Barker’s wife, Lillah McCarthy, who was playing Helena.

Wilkinson designed a flattering silk dress, based on Greek sources, but given a contemporary spin. The under-dress is silk, the skirt stencilled with a stylised floral spray in pink, and the matching tunic has silver lame infill to the neck and a deep macrame fringe. Both the tunic and dress are weighted with a fringe of tiny silver balls. The costume shows imagination and simplicity in contrast to 19th century literal realism. This is ‘realistic’ but pared to essentials and given a very English decorative twist.

The account book seen here details the cost of putting
on Harley Granville Barker’s production of A Midsummer
Night’s Dream, including the price of this costume, worn
by Lillah McCarthy. Some of the effects, like painting
the fairies gold, were particularly expensive to achieve. 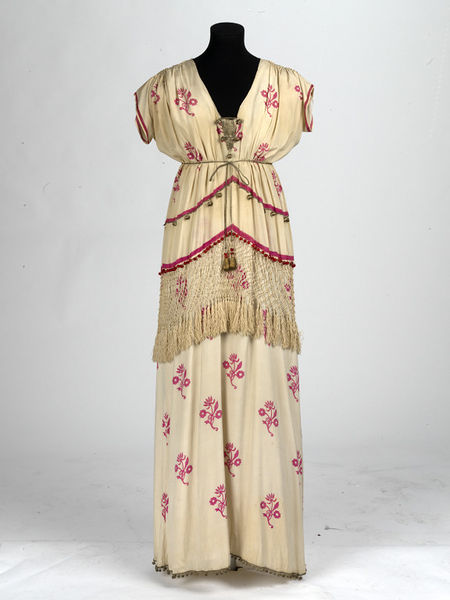