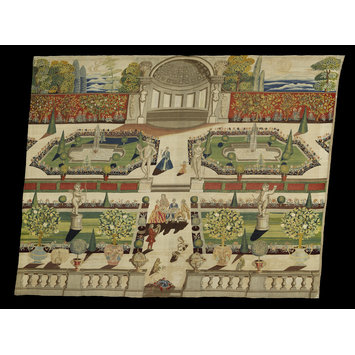 This is the smaller of a pair of embroidered wall hangings which came originally from Stoke Edith in Herefordshire. The embroideries depict formal garden scenes, laid out in late-17th-century Anglo- Dutch style. They would have been used like woven tapestries, to line the walls of a room with decorative, narrative scenes.

Stoke Edith was built by Paul Foley, Speaker of the House of Commons, who demolished the old house on the site and started to build the new one in 1697. The house was completed by his son Thomas after his death in 1699. After a visit by the leading garden designer George London in 1692 the park and gardens were remodelled to his suggestion, and it is likely that pleasure grounds would have been laid out around the house in a series of formal compartments with geometric walks, flower-beds and fountains.
The gardens depicted in the hangings may reflect the appearance of the real gardens at Stoke Edith in the early 18th century or may be composites of elements of fashionable garden design of the period, which included Chinese porcelain pots and extravagantly fashionable tulips.

Family tradition described the hangings as the work of members of the household, but their huge scale and the consistent quality of the embroidery indicate that they must have been made in a professional workshop.

Embroidered wall hanging, from the same room as the larger Stoke Edith Garden hanging T.568-1996. Worked mainly in tent stitch with some areas of applique such as on the Chinese pots. The design was drawn in pencil on the canvas prior to embroidery, as can be seen down the right-hand border where the embroidery ends and the canvas edge is exposed. There are holes along the edge where the canvas was attached to a frame while being made.

The hanging has distorted into a parallelogram, being pulled out of shape over the years by the diagonal tension of the tent stitch. The embroidery is worked in silk and wool threads on a linen canvas ground. The appliqued areas are worked on fine linen. In 2016 the whole embroidery was given a full linen scrim stitched support for display in the British Galleries.

The design is of a formal walled garden. Parkland can be seen beyond the red-brick boundary wall. A garden seat within an open-fronted garden building in neo-classical style, is set into the centre of the wall. Straight, wide paths bisect four lawns, which are dotted with closely-clipped topiary shrubs and surrounded by flower borders with tulips and carnations. Two lawns have pools with fountains playing in the centre, the other two have cherubic sculptures. The ground falls toward the viewer with two wide terraces, with steps leading down through a stone balustrade in the foreground. The scene is populated by a group of people sitting around a table, a woman and child, a harpist, a running dog, a monkey, a peacock, a parrot on the balustrade, and a servant who is tripping down the steps in the foreground and dropping his wine tray. Strong shadows are cast by the figures, topiary and sculptures.

Embroidered linen canvas with silk and wool, and appliqué

The three hangings known as the Stoke Edith Hangings were formerly at Stoke Edith House in Herefordshire. The house was built by Paul Foley, Speaker of the House of Commons, demolishing the old house on the site and starting to build the new one in 1697. The house was completed by his son Thomas after his death in 1699. After a visit by the leading garden designer George London in 1692 the park and gardens were remodelled to his suggestion, and it is likely that pleasure grounds would have been laid out around the house in a series of formal compartments with geometric walks, flower-beds and fountains.(Evidence for these in a survey of 1766 as a prelude to new alterations). The gardens depicted in the hangings may reflect the appearance of the real gardens in the early 18th century.

The house was destroyed by fire in 1927. Prior to this the hangings hung in the green velvet bedroom, between the dado and the ceiling.

The largest hanging came to the V&A for conservation in 1980 and was not returned as display conditions at Montacute were no longer suitable. Together with the other two hangings it was allocated to the V&A by the Dept of National Heritage on behalf of the Treasury Solicitor in November 1996.

This hanging was installed in the British Galleries in 2016 as a replacement for another in the set, T.568-1996, as part of a programme of rotations to preserve textiles from potential fading. In preparation for display it was surface cleaned, then sent to Royal Manufacturers De Wit, Belgium, for wet cleaning. It was then conserved in the V&A Textiles Conservation workshop and a supportive lining applied to the back. 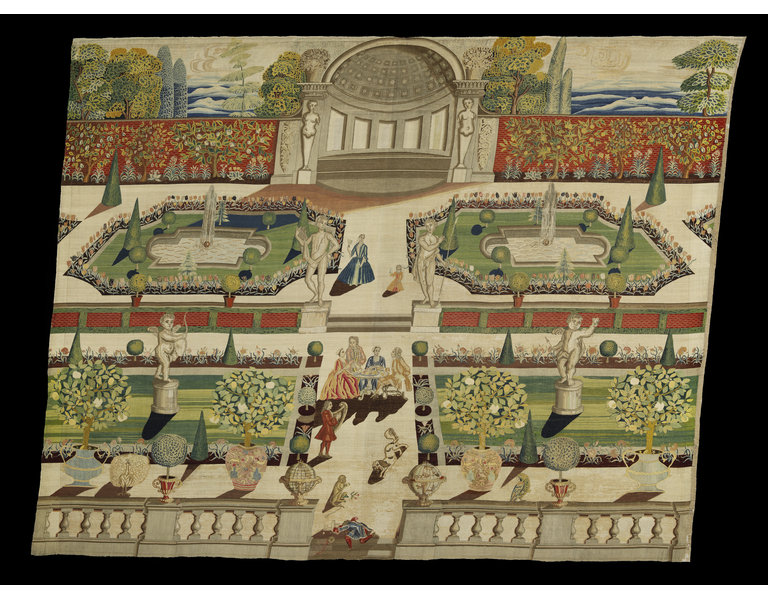