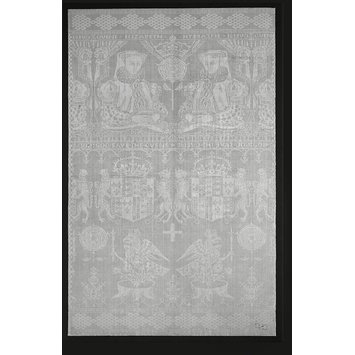 Fine linen damask was a prestigious textile used at court for the ceremonies associated with dining. The highest quality was woven in the Southern Netherlands, and it could be made to commission, sometimes including royal arms. This napkin includes the coat of arms of Anne Boleyn with the portrait of her daughter Queen Elizabeth.

Napkin of linen damask. At the top and bottom is a broad border of interlaced knots between two strips of decorative interrupted chequerboard pattern.
Below this, the design, in point repeat, consists of the following: Inscription of QUENE ELIZABETH; Bust length portrait of the Queen, between draped curtains, and she is resting her clasped hands which hold a book on a cushion, and a large Tudor rose is suspended before her; Inscription of GOD SAVE THE QUENE; The coat of arms of Anne Boleyn with griffin and leopard supporters and a crown crest; A crowned falcon holding a sceptre standing amid roses growing from a tree stump and with a plain Saint George's Cross and a Tudor rose in the interspaces.

The point repeat is wide, filling almost the whole width of the napkin, and with a narrow strip of scenes repeated to each side with a chequerboard selvedge beyond.

A large 'GG' is embroidered in light brown silk in one corner.

'GG'
Embroidered in silk in one corner

Although linen damask from the sixteenth century is frequently recorded in inventories, its survival is relatively rare, largely because of its suitablilty for re-use over long periods, until it was worn out, and the need, by its nature, to launder it frequently.

At the beginning of the sixteenth century, damask table linen, characterised by its elaborate reversible patterns, was still reserved for royalty, the church, high nobility and the very rich among the bourgeoisie. As the century progressed, linen damask weaving developed into an important branch of the textile industry, with its main centres in Flanders in the Southern Netherlands and Haarlem in Holland, and the use of table linen by merchants, trades people and others belonging to the middle and upper classes grew. By 1600, most of these households had at least one complete set of table linen, including one or more table cloths, and a number of napkins. Napkins were subject to statutes that specified certain widths, and were either woven with borders all around or made from piece goods and cut to the required length.

Fine linen damask was a prestigious textile used at court for dining. The highest quality linen damask was made to commission in the Southern Netherlands. This napkin with portraits of Elizabeth I includes the coat of arms of her mother Anne Boleyn.

Fine linen damask, a prestigious textile, was used at court for the ceremonies associated with dining. It was often offered as a diplomatic gift. The highest quality pieces, like the one in front of you, were made to commission, and woven in the Southern Netherlands.

This napkin was made in about 1570-1600, and has a repeated half-length portrait of Elizabeth I in the weave, together with the words QVENE ELIZABETH and GOD SAVE THE QVENE. The portrait was based on an Antwerp engraving dated 1559, the year after the Queen’s accession. The queen wears a fashionable French hood and puffed sleeves, and rests her arms on a tasselled cushion. Beneath is the coat of arms of Anne Boleyn, her mother, framed by a leopard and a griffin. The crowned falcon, Anne Boleyn’s personal badge, can be seen together with the Tudor rose and St.George’s Cross, both emblems of the Tudor dynasty. Elizabeth used her mother’s badge on a number of her books.

Fine linen damask was a prestigious textile used for the
ceremonies associated with dining. The highest quality
linen damask was woven in the Southern Netherlands. This
napkin has portraits of Elizabeth I and the coat of arms of
her mother, Anne Boleyn. A spectacular table cloth with the
same portrait of the queen was ordered by Sir Thomas
Gresham, founder of the Royal Exchange in 1571 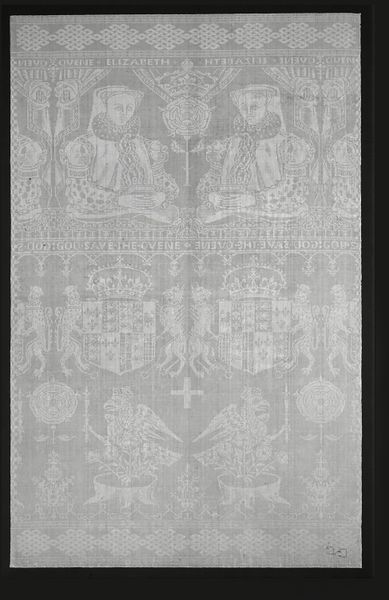