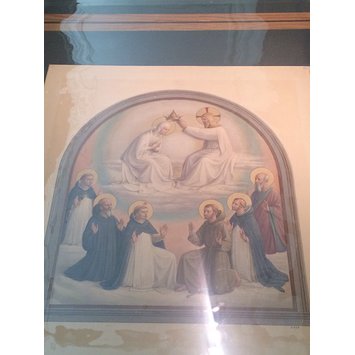 Copy after The Coronation of the Virgin, Fra Angelico in the Convent of San Marco (Florence)

It was painted for the Arundel Society, founded in 1848 to promote knowledge of the art through the publication of reproductions of art works. The Arundel Society popularised Renaissance art, particularly that of the Italian Old Masters, echoing an growing interest for ‘primitives’ in the second half of the nineteenth century. This copy from the Convento di San Marco was published as a chromolithograph in 1864 (Museum no.20676).

Arched on top watercolour showing a group of six men looking at the Virgin incoronated by Christ.

Water and body colour on paper, gold and traces of pencil

Watercolour copy made for the Arundel Society by Cesare Mariannecci in 1864 and published as chromolithograph (Museum No.20676) in 1864 by Storch and Kramer.
The watercolour is stamped with an early museum stamp.

Fra Angelico was one of the most popular of the ‘Primitive’ artists (art of Western Europ prior to the Renaissance). Interest in him was revived in the late 18th century, when Alois Hirt (1759-1836) a German art historian, discovered the frescoes in the Niccoline Chapel in Rome. Interest increased in the nineteenth century and the Arundel Society’s first publication in 1849 was a biography of Fra Angelico, taken from Vasari’s Lives of the Most Excellent Painters , published in its entirety in 1850 with 20 lithograph, including copies after Fra Angelico's work in Rome. Some of them are now in the V&A collection (see for example 23109 or 21100, from the second set of lithographs appeared from 1862 to 1869).

Arundel Society
The Arundel Society was founded in 1848 to promote knowledge of art through the publication of reproductions of works by Old Master painters. The Society was named after Thomas Howard, 2nd Earl of Arundel (1585-1646), an important aristocratic patron and collector of the early Stuart period. The Society was intended to reach the largest possible audience through these reproductions. Subjects were chosen because of their instructive meaning, rather than their popularity.In addition to copies of famous paintings, the Society published an English translation of Giorgio Vasari’s (1511-1574; Florentine painter, draughtsman, architect, writer and collector) Lives of the most excellent painters , made in 1850 by Giovanni Aubrey Bezzi (1785-1789), one of the founding members of the Society.

The Arundel Society popularised Renaissance art, particularly that of the Italian Old Masters, echoing a growing interest for ‘primitives’ in the second half of the nineteenth century. The founding members of the Arundel Society were all acknowledge experts on Italian art. For instance, Sir Charles Eastlake (1793–1865; painter and art administrator), whose house was the meeting point of the Society, was Director of the National Gallery in London from 1855 until 1865 and during his tenure, he began one of the finest collections of Italian art in Britain.

The Society reached the height of its popularity in the 1860s. However, by the end of the century, it faced mounting criticism with regards to the accuracy of its watercolour copies. The Society ceased its activities in 1897. In these years the availability of second hand prints had increased and the Society found it difficult to find market for its chromolithographs. Moreover, photographic reproductions had become more common than prints thanks, to technical advances.

Copyist
This watercolour was painted by Cesare Mariannecci (1819-1894), a painter trained in the Accademia di San Luca in Rome. He moved to Florence in 1859, where he was principally active. Mariannecci was one of the most productive copyist engaged by the Arundel Society and worked for many years making more than 85 watercolours for the Society. His first copies were not highly detailed and did not accurately record deterioration or original colours. After criticism from the influential magazine Athenaeum, in 1864 Mariannecci was instructed by the Society to reproduce the originals as faithfully as possible, avoiding his personal interpretation.

Watercolour, copy after The Coronation of the Virgin, Fra Angelico in the Convent of San Marco (Florence), Cesari Mariannecci, 1864 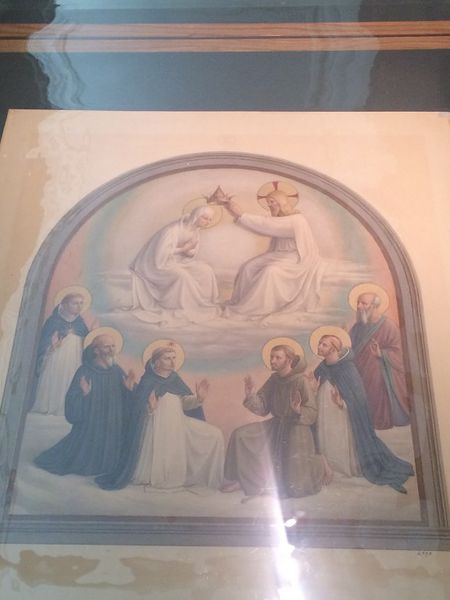