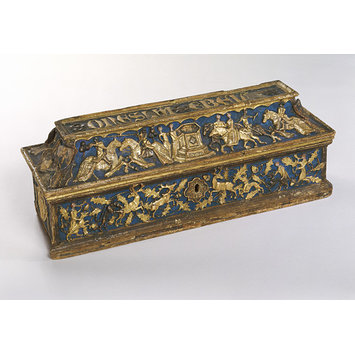 This casket or forzerino is thought to have been made in Florence in about 1400, and would have served as an engagement present from a future husband to his betrothed. It is decorated with hunting scenes, the fountain of love and the wounded stag, which was as much a symbol of love as of the chase. The lid is inscribed onesta e bella , 'honourable [or rather, chaste] and beautiful', words befitting such an occasion. This lavishly decorated object is both parcel-gilt (that is, parts of its are gilded) and painted blue, a colour that was extremely expensive. Such luxury would have gone against the recommendations of the sumptuary laws that came into force in Florence in 1356 and were aimed at keeping the cost of weddings down. When it was acquired by the Museum in 1890, it cost the hefty sum of £467 9s 7d (£467.48), reflecting its lavish decoration and its romantic subject matter. No doubt the Victorians' love of all things to do with Medieval chivalry and courtly romances made it such a sought after item.

Lidded casket of elongated rectangular form, the exterior painted blue and gilded, with all four faces and the raised, hinged lid decorated with applied low relief moulded ornament which shows a procession to a fountain, hunting and tournament scenes, women among oak leaves, shields and roundels, and the inscription (along the top of the lid) ONESTA E BELLA.

The box is of boarded construction, apparently dovetailed, with the boards mitred at the corners, and has applied mouldings (probably held with wooden dowels or glued) around the bottom (the mouldings heavily worn away at one end). The plain bottom is dowelled up into the sides, front and back. The lid is constructed from four concave sections, possibly dovetailed, on which is set a flat capping. It appears that a bead has been applied around the capping, and a moulding applied around the edges of the lid. The lid is held on three wire loop hinges, the central one missing its upper part. On the underside of the lid are the remains of fixings for a metal handle. On the front is an applied escutcheon decorated with flat scrolling floral ornament. An iron lock hasp is nailed into the underside of the lid, and the corresponding internal lock is missing (except for a fragment of metal).

The plain interior retains traces of fabric weave in an adhesive indicating was once lined with fabric (possibly linen?).

Decoration
Lid upper surface: inscribed *ONESTA*EBELLA* [* represents a 6-petalled flower]
On the concave arris of each corner: an applied shield; one with a Latin cross, one with a horse (or dragon?), the other two indecipherable
Lid front: to the left two knights on horseback jousting (one missing his lance, the other lance (held high?) surviving in part. In the centre an hexagonal fountain head at which stand two women, and which is approached by two women and two soldiers on horseback
Lid ends: a truncated quatrefoil form containing a vessel(?), but most of the detail lost
Lid back (most of the applied ornament lost) among scrolling stems and oak leaves: 2 standing female huntress figures (one with a bow?), with two(?) dogs chasing two (?) stags, with what appears to have been a central fountain with a standing female(?) figure

Surface treatments
The wood is covered with a white ground below applied relief work (probably non-setting calcium sulphate with animal glue, modelled by hand rather than cast). On the back of the casket where female figures are missing drawn lines (for drapery) can be seen in grey on the white ground, apparently indicating the positions of these missing parts. An orange bole has been freely applied over the applied ornament, in places overlapping the adjacent background. During the gilding process some leaf overlapped the background but was subsequently covered by the application of blue paint as part of the original scheme. Most of the relief areas are water gilded, but the flowers on the lid, some of the horses and hounds on the front seem to have been covered with a silver-coloured leaf. (Traces of metallic grey can be observed in areas protected from wear, such as the recesses of the petals on the flowers on the lid.) The gilding and silvering is decorated with punch work using a single, small round punch. The faces of the figures have been painted over the gold. The shields at the corners have also been painted.

The background is painted blue (apparently originally azurite in an egg-white size), and may have been painted over a second layer of white ground. Some areas of the blue back ground have been retouched using a synthetic ultramarine, mingling with the original finish. It is hard to determine the old paint from new but the older paint appears to be much brighter.

The casket was exhibted at the Esposizione e d’ intaglio e intarsio in legno, at the Palazzo delle Belle Arti in Rome 1885. It was then in the collections of Attilio Simonetti. R.Hercolei in the Catalogo delle opere antiche d’ intaglio e intarsio in legno esposte nel 1885 in Roma …(Rome, 1885) p. 179, identified the coats of arms as those of the de Bilioctis and de Nerlis, two familes from Florence.

The relief ornament on the sides and lid of this casket is applied gesso duro (a thickly moulded plaster). The subject of the decorative scheme suggests that the casket may have been a chivalric gift to a lady, perhaps on the occasion of her betrothal to the giver. The scenes depict knights hunting and jousting, ladies on horseback and standing beside the fountain of youth and other scenes from courtly life set amongst oak leaves and acorns.
Hunting is an appropriate topic, as it was sometimes used in art and literature as a metaphor for courtship. The inscription on the lid reads "Onesta e bela" (honourable and beautiful) in Lombardic script, qualities presumably ascribed to the lady for whom the casket was intended. the heraldic arms of the couple appear at either end.
In order to control the spiralling costs of weddings, contemporary Florentine sumptuary laws stated that betrothal caskets should not be too richly decorated nor too costly. However it seems that that this rule was frequently violated, and this casket includes man of the banned forms of ornamentation such as gilding, the elaborate courtly scenes (when only arms were allowed) and the pigment azurite which has been used to make the bright blue background.

F.Watson, The Garden of Love in Tuscan Art of the Early Renaissance (Philadelphia and London, 1979), p.91ff, p.154 n.44 plate 74
"Shaped like a cassone or more precisely a reliquary chest, this small object is richly decorated with reliefs painted azure and gold. On its front side runs a chase, entangled in graceful rinceaux of oak leaves. To the sides hunters blow horns and unleash hounds, while at the centre more dogs pounce on fleeing stags. The curved sides of the lid display a mélange of chivalric events. At the left mounted knights joust, at the right more warriors escort several ladies to the tourney, and in the centre two women guard a hexagonal fountain…One of the vignettes from the hunt below, a stag looking back at a dog who claws its haunches, repeats almost line for line a drawing from the Morgan Library’s model-book (illustrated, pl. 75). Hoary Trecento patterns here receive a new configuration. A naturalistic motif from the model-book is associated with chivalric pursuits and with a fountain [much like the central feature of the Douai Gareden of Love plate 51]. The well now becomes the goal of an amorous quest, possibly based on an Arthurian romance that has eluded identification. The hunt after stags anticipates the ancillary decorations of the Venus coffer of 1421 (plate 69). In a tortuous fashion the reliefs allude to the course of love in general and to feminine attractions in particular, an allusion suitable for a coffer probably intended as a betrothal gift. [p. 154 note 44 suggests that the size and shape of coffers like this one would have made them ideal containers for such finery as jewelry and belts sent to newly affianced brides on the occasion of their betrothal.]

A less inchoate reference to love in general and to one lovely lady in particular is an inscription carved upon the top surface of this casket’s lid, “Onesta e bella.” It is pleasant to note that such compliments to charm and virtue reconcile qualities long held to be mutually exclusive. At the beginning of the fourteenth century Bartolomeo da San Concordio, we recall, asserted that “Bellezza” more often than not was inimical to “Onestà.” [see also p.101] The epigraphic refutation of the Ammaestramenti degli atichi on a coffer at the end of the century depends on the verses of the great Tuscan poets. Petrarch, for example, laments the departed Laura:
“Two great enemies, Bellezza and Onestà
Had been brought together with so much concord
That her holy soul felt rebellion no more.”

The union of opposites caused the poet to fall I love, first through the efficacy of “Bellezza,” her fine eyes “whence so many amorous darts were wont to sally,” and then through “Onestà,” defined as an ideal of virtuous behavior: “Gentle deeds, and speech wise yet humble.” Of necessity the coffer’s motto simplifies Petrarch’s thought, endorsing more wholeheartedly than he the virtue of love."

CASKET.
FLORENTINE: about 1400.
Wood with relief-decoration executed in gesso; painted and gilt.
The top inscribed in Lombardic letters Onesta e bela (Honourable and Beautiful) suggesting that the casket was probably a chivalric gift to a lady. On the lid and sides are scenes of jousting and hunting and of courtly life.
8-1890 [pre-2006]
CASKET
Painted wood with gilt gesso, inscribed ONESTA E BELLA
ITALIAN (Florence); about 1400
9-1890

The box is decorated with scenes of a hunt taking place by the Fountain of Love, themes suitable for love and courtship. It was probably intended as a betrothal gift. The inscription is translated as "honourable and beautiful". [Pre-2006] 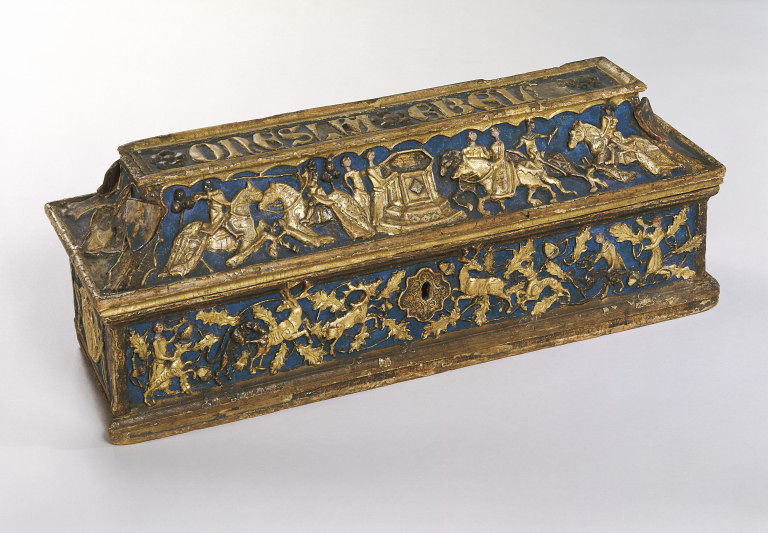