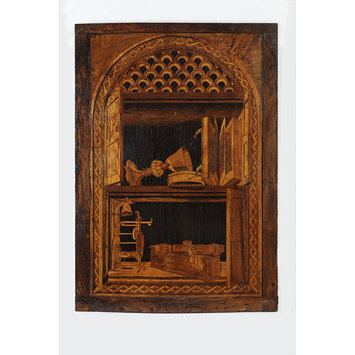 When this inlaid or intarsia panel was bought from a London dealer in 1878 nothing was known about the author or provenance of this work. In recent years it has been attributed to Fra Raffaele da Brescia (1479 - 1537), who executed intarsia panels for chapels of various monasteries, such as San Michele in Bosco, above Bologna. Fra Raffaele made arcaded panels with borders and lunettes virtually identical to this one, and trompe-l'oeil (literally, 'deceive the eye') images of every-day objects - in this case a clock typical of about 1500, with a twenty-four hour dial that rotated round a fixed pointer. During the upheavals in Italy that followed the Napoleonic invasions of the 1790s, these panels were dismantled and removed. Eighteen of them were salvaged in 1812 by Marchese Antonio Malvessi, who moved them to his family chapel, in S. Petronio, Bologna. This panel may have been 'one that got away'.

Rectangular intarsia panel of gently convex form, in the form of a trompe l'oeuil of a cupboard wih open doors, revealing a chalice propped up on a disc-shaped box and missal on the top shelf and a clock and cross, resting on its boc on the bottom shelf. The cupboard framed by an arch with a zig-zagged interlacing border, and above the top half of the cupboard is a lunette decorated with an inverted fish scale pattern.

The substrate on which the marquetry has been glued consists of four vertically grained boards which were glued before the back face was adzed. A tongue has been cut on all four edges, now held within the plain frame. A butterfly cleat has been added across two planks on the back.

The panel is contained by a plain walnut frame, joined and pegged at the corners. This was apparently made up using old wood, planed down to reveal woodworm channels, and the top and bottom rails were bent to match the convex form of the panel itself by cutting a series of slits in the back face. The frame was presumably made during the 19th century.

This object was purchased for £30 from Messrs Stanard Warne & Son of 3 Bruton St., London in 1878. Its previous provenances remain unknown, but it almost certainly formed part of a series of intarsia panels made for the choir of the Olivetan monastery of San Michele in Bosco, outside Bologna, some time between 1513 and 1537, when their author, Fra Raffaele da Brescia (1479 - 1539), was a member of the order there. Designs were provided by, among others, Giovan Battista da Imola, Amico Aspertini, Bartolomeo Ramenghi detto il Bagnacavallo. In 1645 John Evelyn visited the church "built on a steep hill on the edge of the city, for its fabric, pleasant shade and groves, cellars, dormitory, and prospects, one of the most delicious retirements I ever saw; art and nature contending which shall exceed; so as till now I never envied the life of a friar ...The carvings in wood, in the sacristy, are admirable, as is the inlaid work about the chapel, which even emulates the best paintings; the work is so delicate and tender." Camerota (p.351) notes that the distinctive feature of the crucifix leaning out towards the viewer is found in the much later painting by Carlo Maratta (La Croce e il libro) painted in 1646 for John Evelyn.

The stalls were modified in 1655 and 1664. Following the French invasions of Italy in 1797, the stalls were removed from this church and 'sold for a few coins by local street vendors' according to Caffi (see Camerota et al. 2015, p.402). Eiighteen intarsia panels were subsequently salvaged by Marchese Antonio Malvezzi, who in 1812 installed them in his family chapel in the Basilica San Petronio in Bologna, in 1812. This item was not included amongst Malvessi's panels, and it is thought that another (making 20 in total) also existed.

This panel is significant for two reasons: the high standard of the still-lives and perspectives achieved by northern Italian monks at the end of the 15th century and a very accurate and detailed representation of clocks of that period. By about 1450 perspective had become something of an obsession amongst artists, and wood of different colours was thought particularly suitable for creating this form of art, whether architectural fantasies or still-lives. This panel includes a particularly skillful representation of a chalice and cross, set at unorthodox angles. The representation of this twenty-four hour clock is one of the earliest examples of a timepiece, driven by clockwork mechanism. According to Camerota (p.351) similar clocks are represented in intarsia panels in the studiolo of Federico da Montefeltro in the Palazzo Ducale, Urbino (by Giuliano da Maiano, 1473-76), in the choir of Santa Maria in Organo in Verona (Fra Giovanni da Verona, 1494-99), in the so-called Sacrestia di Vasari in Sant'Anna dei Lombardi, Naples (Fra Giovanni da Verona, 1506-10) and in the choir of San Domenico, Bologna (Fra Damiano Zambelli, 1528-49).

Fra Raffaele da Brescia (1479 - 1539) was the pupil of Fra Giovanni da Verona, and his intarsia panels were highly regarded in his lifetime, as witnessed by the inscripion on his Roman tomb "opere vermiculato ex ligneis segmentis proxime ad nobilissimos pictores accedebat", and other contemporary writings (see Camerota p.351).

Between about 1430 and 1530, Italian woodworkers specialized in the art of making creating architectural fantasies and still-lives from different coloured woods, by inlaying them into panels of wood, mostly walnut. This art was first known as tarsio (and later as intarsia), and still-lives were referred to as prospettive. In Northern Italy, intarsia first flourished in Ferrara during the 1430s, and it there that Fra Giovanni da Verona (1457 - 1525) first learnt his craft in the Benedictine monastery, which he entered in 1475. Both the Benedictine order and its offshoot, the Olivetan order, to which Fra Giovanni da Verona and his pupil Fra Raffaele da Brescia (1479 - 1539) both belonged, laid stress on manual work as much as prayer, and fostered skills in this form of art, which was applied to flat surfaces, such as choir stalls, pulpits, and sacristy cupboards. Fra Raffaele lived and worked in the monastery of San Michele in Bosco between 1513 and 1537, where he produced a set of still-lives for the choir, of which the V & A's panel could well have formed a part.

Rectangular intarsia panel, in the form of a trompe l'oeuil of a cupboard

The panel was executed by Fra Rafaele da Brescia to the design of Giovanni Battista da Imola as part of the chior-stalls of the church of S Michele in Bosco in Bologna. The stalls were dispersed in about 1797, but the major part are now in a chapel in the church of S Petronio in Bologna. The panel is an exercise in the newly-developed skills of perspective drawing and the subject also celebrates the innovations of the Renaissance, by including one of the earliest representations of a timepiece driven by clockwork. [Pre-2006] 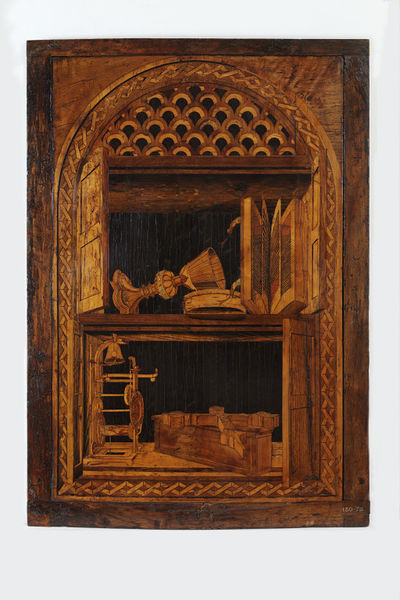