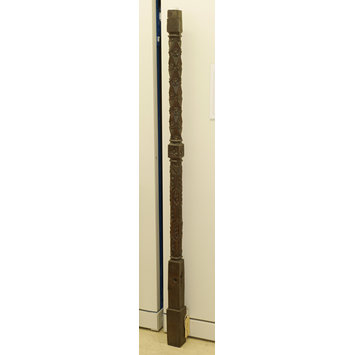 When this post and its pair were purchased, they were described as bedposts, although there is no evidence that they came from a bed. Carved posts were used to separate panels on panelling or screens and to support canopies. They might even appear on the outside of wooden buildings. Antique dealers in the 19th century favoured the idea that such posts came from beds as that allowed saleable items to be made up from them. It seems likely that these posts were used as part of a bed at some more recent time, because both seem to have been drilled at the base to take beds-screws.

Post of carved oak, now covered with dark varnish. A base section of square section is surmounted by a tapering turned column, decorated with two different patterns of overall carved motif above and below a square central block carved on each face with a rosette. A similar square block forms the top of the post. The lower part of the post is carved with elongated octagons with coarse chip carving giving the appearance of overlapping leaves or lobed leaves such as oak. The upper part is carved with lozenges, each with a central rosette.

The bottom 22 cm of the post shows shallow applied boards on all sides, but the original post appears to continue right through this box, the bottom of the post scarred with several screw holes as if for the fixing of a castor plate. The rectangular base section, just below the lower carving, shows a long and deep mortice-like slot on two sides. These slots run down behind the attached modern boards. On the other two sides of the post, are two circular holes for bed bolts, which may have served to fix the boards within the slots.

Above one of the slots, in the carved area of the post, is a patch where the carving has been coarsely cut away at a height between about 67 and 90 cm from the base of the post. There are three drilled holes for pegs in this area and one slightly lower, all containing pegs. At right angles to this patch is a narrow vertical slot cut into the central square knop of the post, at between 115 and 123 cm above the base. This may have been the housing for a narrow plank.

At the top of the post, the block is cut away on one side and has been built up with an L-shaped section of new wood, which extend the height by about 2.5 cm.

One of a pair of posts, the shaft of each carved on the upper half with lozenge ornament enclosing rosettes, and on the lower with hexagonal diaper pattern. In the centre, on each face, the post is carved with a shield bearing a Tudor rose. 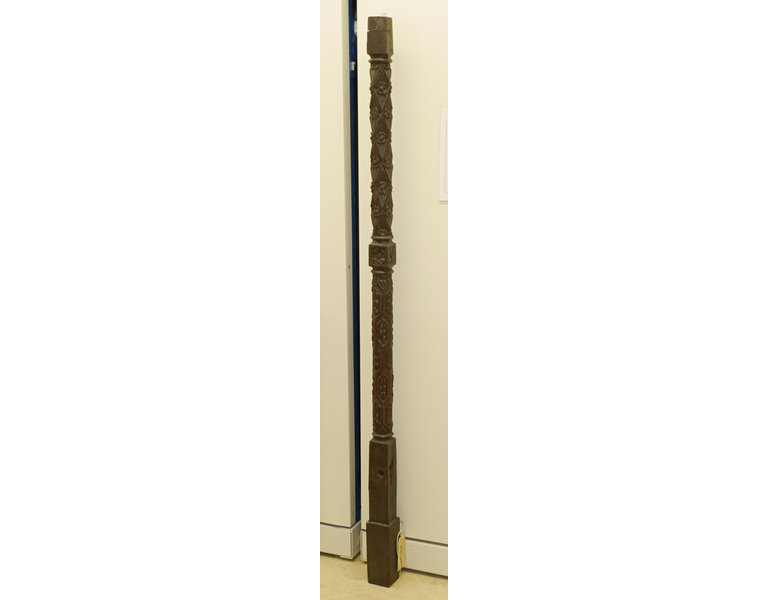