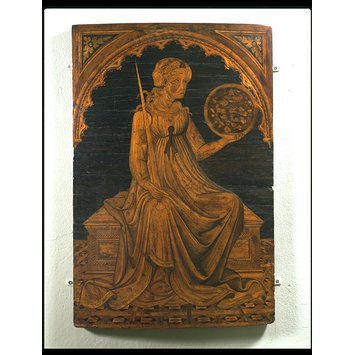 The Justice panel was acquired by this Museum in 1859 as an outstanding example of Italian Gothic inlay or intarsia. Recent researches have attributed it to Mattia di Nanni (1403–1433), the most outstanding pupil of Domenico di Niccolò, Siena’s leading intarsia specialist of his day. After the sudden death in 1402 of Giangaleazzo Visconti, the Milanese tyrant who had tried to impose his rule throughout Northern and Central Italy, Siena adopted a civic form of government, the virtues of which were extolled in a series of decorations carried out in the Palazzo Pubblico between 1415 and 1430. Mattia’s contribution was to execute a large bench decorated with inlaid panels of heroes of the Ancient Roman Republic for the Sala del Mappomundo (Chamber of the map of the world). Judging from style, technique and subject (note that Justice is depicted holding a map of the world as well as a sword), Mattia almost certainly made this panel of Justice for a pulpit or elevated chair, which also belonged to this room at the time.

Rectangular panel in intarsia of a seated female figure of Justice, holding a sword in her right hand and a map of the world in her left. The panel is arcaded with a cusped, gothic arch with foliate quadrants. The figure and the drapery of her robes is made up of narrow strips of various laminated woods, and she is set against a dark background of bog oak. The figure sits on a plinth with panels, decorated with borders of inlaid mosaic or tarsia a toppo and set on a floor with a geometric pattern made up of woods of different colours.

The Justice panel was acquired by this Museum from an unrecorded source in 1859 for £4, listed as "Panel. “Tarsia” or inlaid wood work. Saint Catherine seated under a canopy. Italian (Florentine?). 14th century."

Recent researches have attributed it to Mattia di Nanni (1403–1433), as part of his decorations of the Sala del Mappomundo (Chamber of the Map of the World) of the Palazzo Pubblico of Siena, carried out between 1415 and 1430.

Historical significance: The Justice panel has two highly significant aspects, one political and the other art-historical. Mattia di Nanni (1403–1433) almost certaily executed it as part of his decorations of the Palazzo Pubblico of Siena, carried out between 1415 and 1430, in praise of civic government. This was adopted by Siena after the death in 1402 of Giangaleazzo Visconti, the Milanese tyrant who had tried to impose his rule throughout Northern and Central Italy. Both Mattia and his teacher, Domenico di Niccolò (c. 1363 - 1450/53) are the only woodworkers known to have used the technique of creating intarsia drappery patterns and flesh tones with laminated woods, and this panel is perhaps the finest example. In addition, Mattia showed himself to be a master of perspective in his representation of the floor with a highly complex geometrical pattern.

Although inlaid panels of still-lives and architectural fantasies did not develope until the mid 1430s (the earliest surviving example being the north sacresty of Florence cathedral, which dates from 1436), inlays of human figures in different coloured woods date back to the 1350s or earlier, one of the earliest examples being the base of the lectern and 'Coronation of the Virgin' in the choir of Orvieto Cathedral of about that time. Until the 1430s, the leading centre of inlay or intarsia was Siena, and the style Gothic. The most outstanding exponents of intarsia were Domenico di Niccolò (c. 1363 - 1450/53) and his brilliant pupil, Mattia di Nanni (1403–1433), who decorated the Sala del Mappomundo (Chamber of the map of the world) of the Palazzo Pubblico of Siena between 1415 and 1430 with a series of inlaid panels of heroes of the Ancient Roman Republic, and almost certainly the panel of Justice as well.

This panel is a tour de force of craftsmanship. The execution of the floor shows a mastery of the art of perspective, and the use of bent wood in the drapery is startling in its technical virtuosity. Justice was one of the four Cardinal Virtues. She is shown with a sword and a terrestrial globe, sitting on an inlaid chest.

Walnut, inlaid with other woods

From a series representing the seven Cardinal Virtues. Justice is shown with her attributes, a sword and a terrestrial globe. Although her clothing is generalised, she is seated on a contemporary intarsia cassone, and the execution of the floor shows the craftsman's mastery of the art of perspective. The use of bent wood in the drapery is startling in its technical virtuosity. The panel is close in style to the panels of the chapel choir in the Palazzo Pubblico in Siena which were executed between 1415 and 1428 by Domenico di Niccolo dei Cori. [Pre-2006] 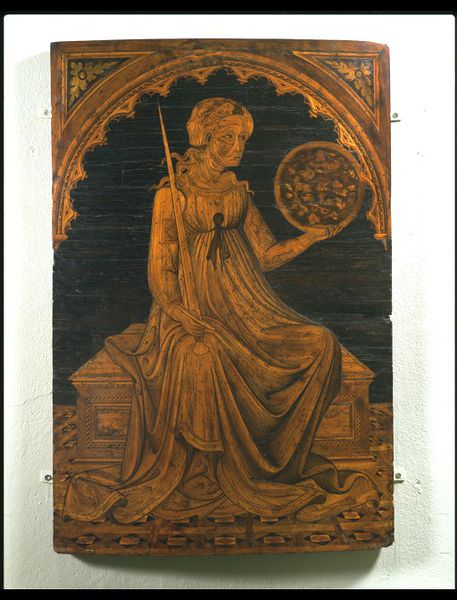